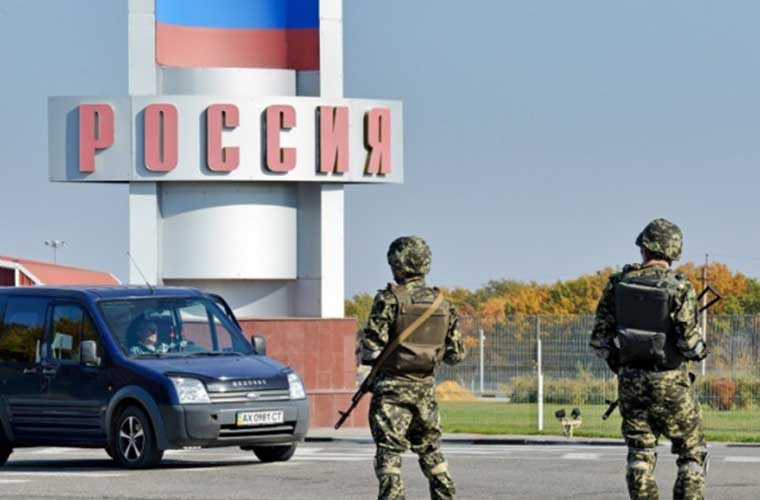 Separatist fighters from the so-called Luhansk People’s Republic (LNR) were apparently abandoned by commanders and then detained by Russian border guards as the Kremlin-backed troops attempted to escape the rapid advance of Ukrainian forces in northeastern Ukraine.

Based on videos and recordings of intercepted phone calls obtained by The Debrief, an unknown number of soldiers from the 206th Regiment of the LNR’s “People’s Militia” were arrested by Russia’s federal border service after they tried to “cross the border illegally” following the Russian military’s retreat from the areas in northeastern Ukraine, near Kharkiv.

The separatist fighters had apparently been taking part in the fighting near Kharkiv.

Before being detained at the border, commanders of the 206th Regiment had evidently abandoned their troops, fleeing over 200 miles south to the unit’s headquarters in the occupied town of Roven’ky.

Prevention of the LNR fighters from crossing into Russia and subsequent detention is particularly ironic given the Kremlin’s casus belli for invading Ukraine was the alleged protection of the pro-Russian separatist regions of the self-proclaimed Donetsk and Luhansk People’s Republic.

On February 15, Ukraine’s defense ministry announced on Facebook that troops of the 227th Battalion of the 127th Brigade of Ukraine’s Territorial Defense Forces had reached the border with Russia, adding: “Together to victory!”

Apparently, at the Ukrainian-Russian border, about a dozen Ukrainian soldiers posed beside a border post in the colors of the Ukrainian flag in a video shared by the defense ministry.

The Debrief cannot immediately verify the account, and it is unknown how many Ukrainian troops had reached the Russian border and where.

However, it is clear that following a series of highly successful Ukrainian counter-offensives, Moscow has been forced to concede defeat in the two-and-a-half-month battle for Ukraine’s second-largest city, Kharkiv.

For the last several days, Russia has been conducting an orderly withdrawal of its battered forces into the Belgorod region of Russia. During Russia’s retreat, soldiers from LNR’s 206th Regiment apparently ran afoul with Russia’s border service.

In a phone call purportedly intercepted by Ukraine’s defense intelligence agency, GUR, a separatist fighter, tells his wife how the LNR soldiers found themselves into “some kind of a mess.”

“They left from somewhere, very quickly. Inadvertently in the Belgorod region [they] found themselves under Russian command,” the man explained. “Command had abandoned them. Command is already, you know, somewhere at home in Roven’ky. But there [at the Russian border], the border guards arrested them, and now they are being held there. They don’t know who they are and what to do with them.”

The unnamed caller explains that the LNR fighters don’t appear to be “registered anywhere,” so it is being treated like the fighters were attempting to cross the border illegally.

“In short, you know, a bunch of men with guns, you know, crossed the border illegally,” the man says in Russian.

The caller eventually tells his wife that the biggest concern is that the detained soldiers will be forced to sign contracts with the Russian military.

A video obtained by The Debrief reportedly shows the LNR fighters of the 206th Regiment camped out at a Russian border crossing.

In the video, approximately 75-100 men in olive green military uniforms are seen loitering around a grassy knoll near a vacant parking lot. Several utility trucks and UAZ vans can be seen tucked in amongst high surrounding bushes. Several vehicles bear a large white “Z” used by Russian forces to distinguish themselves from other allied or enemy forces.

“I send my greetings to everyone from the Luhansk People’s Republic,” an unseen male narrator announces.

“The entire battalion has withdrawn from its positions and is not allowed out of the Russian Federation,” the man says. “It’s the second day, and people at the border are not letting them out. No comment is given. What to do?”

“We don’t know the way, and they won’t let us out,” the individual says as the camera pans around. “[They] threaten us with jail, firing squad, and so on.”

The Fermi Paradox: Where Are All The Aliens?

During the 51-second video, scores of soldiers can be seen lounging around picnic tables. Using rucksacks for pillows, other troops appear to be sleeping amongst the tall grass. Still, other men are seen milling about or smoking cigarettes in varying degrees of dress.

The Debrief cannot immediately verify the video’s authenticity, or the reportedly intercepted phone call. However, the information depicted coincides with accounts received from the ground.

Another video recently appeared on Telegram purportedly showing Russian volunteers who say they were abandoned and “led to the slaughter” in Ukraine.

“We are the Russian Federation’s volunteer unit, called upon to assist the Luhansk National Republic,” a male speaker says in Russian as the camera pans in front of a crowd of roughly 50-60 men dressed in camouflage and olive-green military fatigues.

“On arrival in the territory of Luhansk, the republic’s local administration misused the personnel. Without proper training, they sent us to the front line. Without any interaction with the armed forces and the Luhansk National Republic of the People’s Militia.”

The unseen commentator claims the supposed Russian volunteers are now back in the Russian Federation. However, many don’t know how they will get back home.

“There is no help from the management. People live in different regions, including and at its most extreme sections, so to speak. Including the Far East.” Several of the men in the group begin to call out different regions of the sprawling Russian Federation, presumably where they are from.

Before the video ends, the narrator concludes, “Well, in general, let’s just say they sent people to the slaughter.”