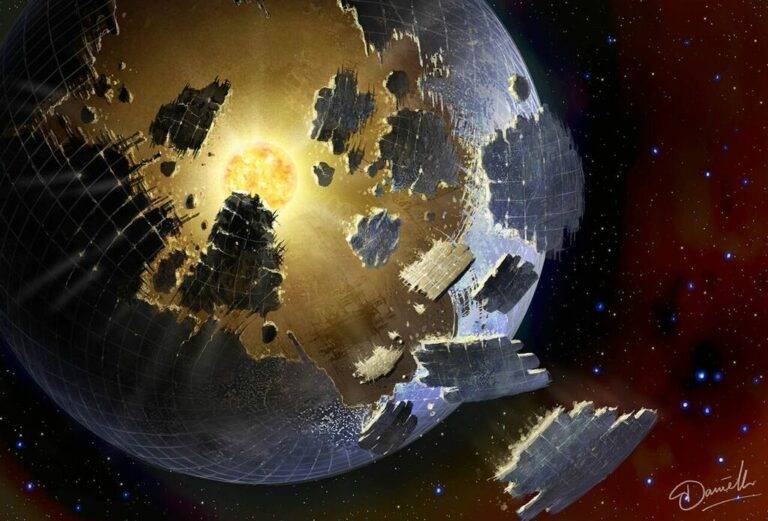 Forward-looking scientists and science fiction writers often try to imagine what advances a civilization like ours may make in the future. Previously theoretical breakthroughs like lasers and rocket ships have come true, while others, like the warp drive and transporters, remain out of reach.

Now, as we progress from a fossil fuel burning Type 0 civilization on the Kardashev scale (a theoretical tool developed by Russian astrophysicist Nikolai Kardashev to measure technological advancement) to a solar-powered Type 1 civilization and eventual solar system controlling Type 2 civilization, those same forward-thinking scientists and science fiction writers have proposed an actual mechanism to do the job. It is called a Dyson Sphere.

What is a Dyson Sphere?

The first attempt to envision such a structure was made by Science Fiction writer Olaf Stapledon in his 1937 novel Star Maker, describing the concept as “every solar system… surrounded by a gauze of light traps, which focused the escaping solar energy for intelligent use.”

The idea was put into more technical terms by British-American theoretical mathematician and physicist Freeman Dyson, for whom the “Dyson Sphere” is named. In his 1960 paper, “Search for Artificial Sources of Interstellar Radiation,” Dyson postulated that a society who had reached a point of development where it required the total output of its host star to meet its energy needs would design a sort of enclosure, or “sphere” to encapsulate the star and capture its emitted radiation before it leaked into space.

Based on his original proposal, Dyson determined that any version of the sphere would absorb and then reflect into space the unused solar energy collected. This reflected energy would be much deeper in the infrared spectrum than the star’s unaltered radiation. Based on his proposal, this “red-shift” in radiation is what astronomers now look for when trying to find such a construct already built by an advanced non-terrestrial intelligent species.

In the years since, numerous potential designs of Dyson spheres have been proposed, with three types emerging as the most common and viable. These are the Dyson Swarm, The Dyson Bubble, and the Dyson Shell.

Consisting of a ‘swarm’ of solar power capturing satellites (with some habitat-type models often thrown in) placed in a tight orbit around the host star, this is the version that most closely resembles Dyson’s original proposal. Variations include a simple and stable ring of satellites in the same orbit to more complex variations of satellites on different orbital planes surrounding the star.

Given our current level of technology, the Dyson Swarm is by far the most realistic type of design we may one day employ, although most predictions like those made by famed futurist Dr. Michio Kaku consider that achievement to be centuries away.

Much like the Dyson swarm, the bubble concept involves numerous satellites surrounding the host star and working in concert to collect its energy. However, the bubble design replaces the less stable orbiting platforms of the swarm for more-stable stationary platforms that use massive solar sails pushed by the pressure of the Sun’s radiation to hold them in place. Because the ratio of radiation pressure to solar gravity is constant, this design also allows the satellites to be stationed at different distances from the host star, all operating independently of one another by merely employing different sized sails.

While inherently more stable than the swarm due to its fixed design, the Dyson bubble has several challenges. Most notable are the limits of current light sail materials, which are all way too heavy to properly maintain a satellite of any measurable weight in the Sun’s orbit. Advances in modern materials like graphene and carbon nano-tubes hold promise, meaning this type of design isn’t wholly unattainable. Still, as of now, it is considered centuries or more beyond human engineering capabilities.

A manufactured shell that entirely encompasses its host star and the design most often depicted in science fiction, the Dyson Shell is by far the most challenging and unlikely from an engineering standpoint, a point made by Freeman Dyson in his original paper.

First, based in part on classical mechanics known as the shell theorem, such a shell would have a net-neutral interaction with its host start’s gravity. In effect, it could and would drift over time, potentially leading to a catastrophic collision between the shell and the star itself.

Second, the shell would be so massive that the sphere’s compressive strength would have to be sufficient to prevent it from collapsing into the host star. No known material is strong enough to withstand these forces.

Third, the staggering amount of material needed to construct this all-enclosing sphere may not even be available to us, mainly if the radius of 1 AU (the distance from the Earth to the Sun) is used.

In a paper titled “Is there enough matter in the Solar System to Build a Dyson Shell?” researcher and futurist Dr. Anders Sandberger estimates that “there is 1.82×1026 kg of easily usable building material in the Solar System, enough for a 1 AU shell with a mass of 600 kg/m2—about 8–20 cm thick on average, depending on the density of the material.”

Sandberger goes on to explain that “this includes the hard-to-access cores of the gas giants [since] the inner planets alone provide only 11.79×1024 kg, enough for a 1 AU shell with a mass of just 42 kg/m2”.

So, although Sandberger concludes there may be enough material available to build the shell, much of it lies in the cores of our gas giants Jupiter and Saturn, making it incredibly difficult to access.

Comets, meteors, and other interstellar objects usually deflected by the Sun’s bow shock and heliosphere will periodically smash into the surface of the sphere, making it incredibly difficult to maintain.

OUTLOOK: Looking for Dyson Spheres In All The Right Places

As of 2021, all proposed forms of Dyson Spheres are beyond our current engineering capabilities. However, since Dyson’s first proposal in 1960, his concept has been used to search for the telltale signs of a highly advanced extrasolar civilization. It is an ongoing effort by SETI researchers that may one day lead to the first discovery of a technological culture harnessing the power of their host star, possibly using one of the types of Dyson Spheres.