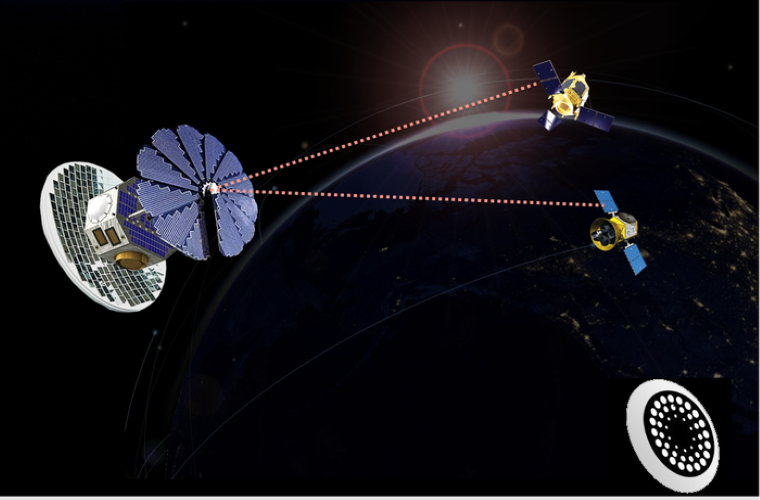 A new project from researchers in the U.K aims to use laser beams to power satellites while they are out of sight of the sun. Developed by researchers from the University of Surrey in concert with the folks at Space Power, the new project hopes to solve an issue that plagues all satellites that spend time out of the sun’s direct view by transferring power from illuminated satellites using laser beams.

Most artificial satellites use solar power to power their onboard systems. However, satellites in Low Earth Orbit (LEO) experience prolonged periods in the Earth’s shadow, robbing them of critical charging time. This problem is increasingly prevalent as commercial ventures like Starlink plan to send thousands of new satellites into LEO in the coming years.

Now, the University of Surrey and Space Power teams think they have a viable solution, even if it sounds like it’s right out of a James Bond (or Austin Powers) Movie.

According to the press release announcing the venture, “By collaborating on a space infrastructure project, the joint team will develop new technology which uses lasers to beam solar power from satellites under solar illumination to small satellites orbiting closer to Earth during eclipse.”

Of course, lasers on satellites are commonplace in the world of fiction, but in real life, using this novel technology to transfer power between satellites would be a first.

“The University of Surrey has a long track record in photonics and space research and brings unique expertise in both high power lasers and photovoltaics technologies,” said Professor of Physics at the University of Surrey, Stephen Sweeney, in the press release. “We have many years of experience in optical wireless power and are delighted to work with Space Power to help develop such technologies for space-based applications.”

Part of the U.K.’s government-sponsored Space Research and Innovation Network for Technology (SPRINT) program, the project hopes to tap into the respective areas of expertise to design the systems that will conduct the inter-satellite power transfer.

For the University of Surrey team, this means using the highly specialized laser laboratories and optical systems developed at the University’s Department of Physics and Advanced Technology Institute, “which are world leaders in the development and implementation of laser and photovoltaic-based technologies.”

Space Power’s expertise will lie in bringing a commercially viable project to market that is “a plug-and-play system for satellite manufacturers to include in their offering to their LEO constellation customers.”

“The SPRINT project is an important development from our feasibility study with the University of Surrey that enables us to approach customers with confidence and demonstrate the improved efficiencies available by using auxiliary power systems,” said Keval Dattani, Director of Space Power. “By focusing on light optics and power beaming, we are looking to increase small satellite operating efficiencies by a factor of between 2X-5X.”

OUTLOOK: LASER BEAMS FOR POWER MAY BE OPERABLE BY 2025

Although there is no announced timeline for the completion of the project, the press release indicates that the teams will develop the prototype without the government and with plans to commercialize the product by 2025. Plus, the folks from Space Power note that they can scale this system up to provide power for future space colonists or even projects closer to home.

“We have seen the benefits of powering satellites by laser, which enables smaller satellites, simpler systems, and fewer resources – whilst performing more work to help us understand our planet better,” said Dattani. “For us, this is a neat solution with long-term benefits, not least for lunar outposts and asteroid mining but back here on earth too.”