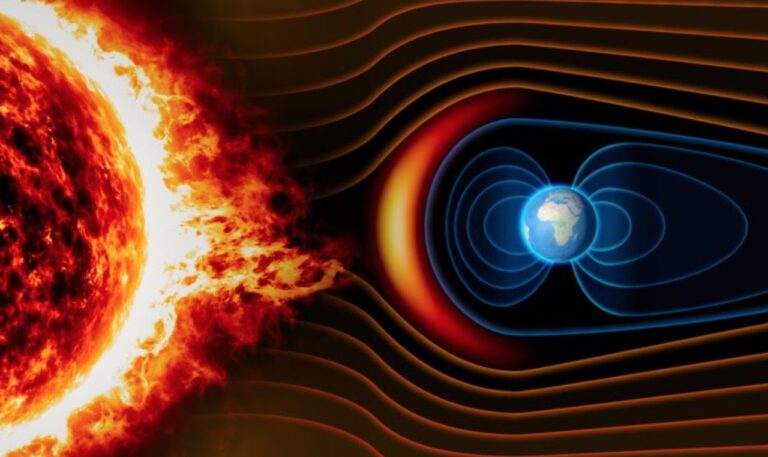 
Scientists warn that similar problems, and even extinction events, could happen again.

A new study suggests that a flip of the Earth’s magnetic poles and the alteration of solar winds may have contributed to both environmental crisis and possible mass extinctions over 42,000 years ago.

In the recent research, this was determined with the help of carbon found within ancient tree fossils, and studies have shown that similar crises and extinction could possibly happen again.

Background: The Magnetic Pole Reversal and Its Effects

The idea of magnetic pole reversal isn’t new. But a better understanding of the effects it causes are becoming much more clear, and especially its connections to the extinction of certain life forms. Over the last 2.5 million years, eight species of single-cell marine life known as Radiolaria became extinct. 6 of these 8 extinctions occurred simultaneously with a reversal of magnetic fields on Earth.

Many scientists believe that these magnetic field reversal events leave the earth’s climate susceptible to extreme cosmic radiation. In a recent study published in the journal Science led by researchers at The University of New South Wales (UNSW) Sydney, and the South Australian Museum, they stated that “Solar flares and galactic cosmic rays ripped up particles in Earth’s atmosphere, ionizing the air and zapping the ozone layer.

“Our ancestors would have witnessed shocking light shows across the sky both day and night,” the researchers say. “The ionized air would have been a great conductor for electrical storms, increasing their frequency. … the world was turned upside down – at least magnetically speaking.”

Surmising how these events may have affected the planet and its inhabitants at the time is one thing. But understanding how scientists were able to date these events involves one of the largest tree species in New Zealand, the Kauri tree.

Known as the “God of the Forest”, Kauri trees can be found in some of the most ancient forests around the world. Recently, while breaking ground for a power plant in New Zealand, workers uprooted a Kauri tree with a massive 60 ton trunk. The tree had been preserved in a bog, and was carbon-dated to almost 42,000 years ago. Because of this, it served as a sort of time capsule for scientists, allowing them to date ancient earth changes, including magnetic reversals.

The rings of this particular ancient tree spanned some 1,700 years, comprising the same period during which the magnetic field reversal would have occurred. In an interview with Earthsky.org, Chris Turney, co-author of the study and researcher with the UNSW, explained that “ For the first time ever, we have been able to precisely date the timing and environmental impacts of the last magnetic pole switch.”

“Using the ancient trees we could measure and date the spike in atmospheric radiocarbon levels caused by the collapse of Earth’s magnetic field,” Turney says.

Outlook: Looking Ahead, and Learning from the Past

This study is extremely exciting for researchers and scientists in many different fields of study. But perhaps the most concerning question that they are asking is, when magnetic poles inevitably flip again in the future, will humans be part of a future extinction event?

Underwater Breathing Crops Could Help in the Fight Against World Hunger

Unfortunately, the science seems to be leaning that way. In an interview with CNN, Turney stressed that, “If a similar event happened today, the consequences would be huge for modern society. Incoming cosmic radiation would destroy our electric power grids and satellite networks.”

If the recent destructive failure of the power grid in Texas is of any indication as to what can happen without functioning satellites and power grids, a weakening of the magnetic fields and reversal could be very detrimental to all of Earth’s inhabitants. However, many scientists have assured the public that we truly don’t know if this will occur again in our lifetime. Even if it does, the flip itself could take centuries to happen, and the effects would be very gradual.

“Our atmosphere is already filled with carbon at levels never seen by humanity before,” Turney added. “A magnetic pole reversal or extreme change in sun activity would be unprecedented climate-change accelerants.

“We urgently need to get carbon emissions down before such a random event happens again.”