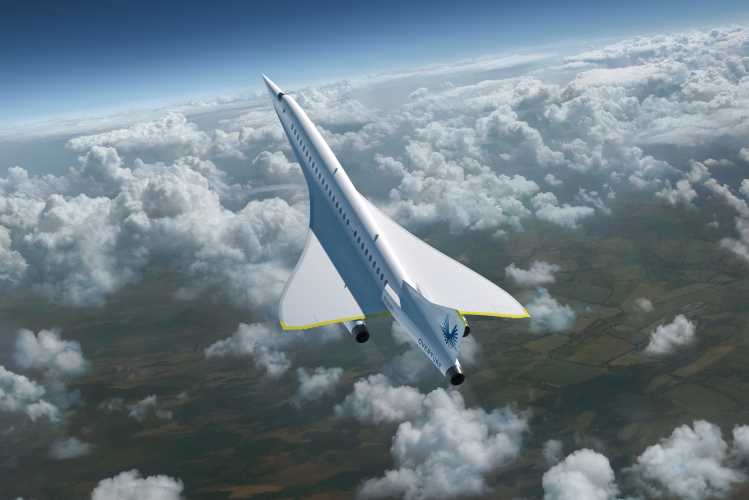 This Company Is Bringing Back Supersonic Commercial Flights

Boom Supersonic is quietly working to reintroduce supersonic commercial travel. The Denver-based startup’s ultimate goal is ambitious: providing four-hour flights, to any location in the world, for $100. But first, Boom will need to flight test their first supersonic commercial jet, the first such jet since the Concorde.

For one, the turbojet engines caused a sonic boom that was too loud for travel over population centers, so the Concorde was restricted to overseas routes. Also, to attain and maintain supersonic speed, the Concorde consumed 47 pounds of fuel per mile flown. For each transatlantic journey, the Concorde consumed nearly 7,000 gallons of fuel. And the narrow fuselage, which limited drag, also limited passenger capacity. Concorde flights struggled to turn a profit between the high fuel consumption and the limited number of passengers aboard the aircraft. Ticket prices rose to about $20,000 in today’s money for a round-trip. The Concorde was retired from service in 2003—just three years after an Air France Concorde crashed into a hotel on takeoff, killing 113. The commercial aviation sector has not offered a supersonic option since. Boom Supersonic hopes to change that.

Modern technology does not support aviation travel at speeds sufficient to span any two points on the globe in just four hours. Speed like that creates vicious amounts of heat, capable of melting modern engines. To accommodate traveling at such speeds, material science will need to advance.

Professor Sean O’Keefe of Syracuse University, formerly an Airbus chairman and Secretary of the US Navy, believes “it’s going to require two or three generations of technology, development, and breakthrough—which equates to about 20 years.”

Boom will also need to solve the fiscal and environmental problems that plagued Concorde.

Commercial aviation produces a large carbon footprint, which cuts into profits and generates more and more pushback from an increasingly eco-conscious public. Boom hopes to achieve higher sustainability (and higher public approval) with more efficient jet fuel and investing in carbon offsets. “What you’re basically doing is sucking carbon out of the atmosphere, liquefying it into the jet fuel, then you put that in the airplane,” Boom CEO Blake Scholl says in an interview with CNN, “so when it goes out the back of the airplane, you’re just moving carbon around in a circle.”

Despite the inherent challenges of developing affordable supersonic flight, Boom Supersonic is receiving high interest in their product. American Express Ventures invested in Boom this April. The US Air Force has invested, too, hoping that the upcoming Overture jet can serve as the new Air Force One one day. Competitors are working to keep up, too. Aerion Corporation and Spike Aerospace are currently working on their own supersonic commercial jets.

Supersonic commercial travel seems poised to return within the next decade or so. And if Boom can manage to create a jet that operates supersonically and affordably, the technology could eventually become commonplace. Travel times would be reduced. The world would shrink. “It changes where we can vacation, changes where we can do business, changes who you can fall in love with or who you can be close to,” Sholl says.