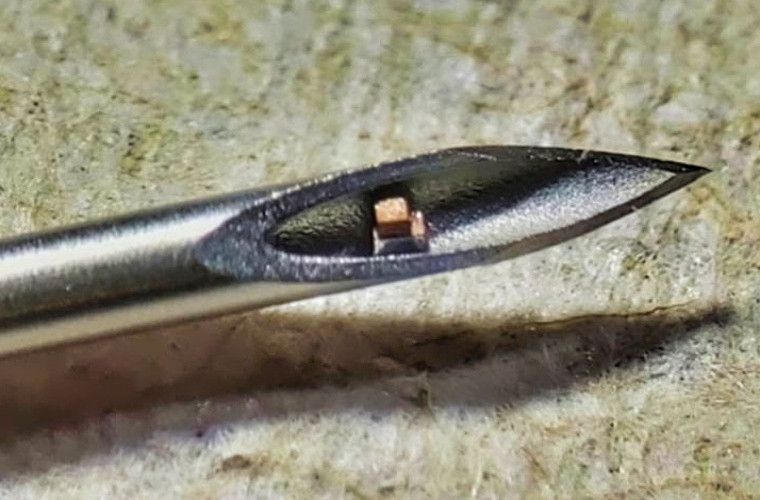 Chips shown in the tip of a hypodermic needle. (Image: Chen Shi/Columbia Engineering)


Conspiracy Theories Aside, New Research Into Tiny Microchips Could Save Countless Lives

While conspiracy theorists will go bananas over microchipping humans, modern medicine relies on implantable medical devices to treat a whole host of ailments. As this technology is becoming increasingly more common, even the smallest applications are still considered bulky, difficult to communicate with, and nearly all require new batteries from time to time. External devices like wearables and other health tracking tools have addressed this to some degree, but devices designed to work inside the body still suffer from these and other limitations.

In hopes of creating a simple solution to this complex problem, a research team from the Columbia School of Engineering and Applied Science has developed a first-of-its-kind, tiny, injectable microchip. This tiny device can be given instructions and recharged using ultrasound.

“This should be revolutionary for developing wireless, miniaturized implantable medical devices that can sense different things, be used in clinical applications, and eventually approved for human use,” said team leader Ken Shepard, a Lau Family professor of electrical engineering as well as a professor of biomedical engineering, in the press release announcing the research.

With some private funding and financial support from the Defense Advanced Research Projects Agency (DARPA), Shepard first set out to determine if building such a small, self-powered device was even possible.

This caused Shepard to join up with Elisa Konofagou, a Robert and Margaret Hariri Professor of Biomedical Engineering and professor of radiology, and Stephen A. Lee, a Ph.D. student in Konofagou’s lab. They then reached out to doctoral student Chen Shi, who ended up as the lead author on the paper and designed the tiny, injectable chip.

“We wanted to see how far we could push the limits on how small a functioning chip we could make,” said Shepard. “This is a new idea of ‘chip as system’–this is a chip that alone, with nothing else, is a complete, functioning electronic system.”

Analysis: Powering the Microchip Inside

After some trial and error, Shi successfully designed a fully functional microchip that is less than 0.1mm3. Or, as stated in the press release, “[t]he system is as small as a dust mite and visible only under a microscope.”

A detailed study outlining the research, which was published in the May journal Science Advances, also notes that Shi’s design “is unique in its volumetric efficiency, the amount of function that is contained in a given amount of volume.”

Of course, to work with a microchip that is so small, the team also had to develop a novel way to communicate with it and a viable method to provide the device with electrical power. And, as noted by the research team’s release, using a radio frequency (RF) signal or other electromagnetic methods wouldn’t work because “[t]raditional RF communications links are not possible for a device this small because the wavelength of the electromagnetic wave is too large relative to the size of the device.”

The release explains that the wavelengths for sound are much smaller than light, so a device of this size could receive those signals even inside the human body. With this in mind, Shi mounted a tiny ‘antenna’ on the top of the microchip, which is specifically equipped to receive sound signals for both power and communication. Or, in this particular application, ultrasound.

Outlook: All That, and a Bag of (Micro)Chips

Although the implantable microchip designed by the Columbia team is currently only capable of measuring a patient’s body temperature, the group’s ultimate goal is to have a device that can monitor things like blood pressure, glucose levels, and oxygen efficiency, as well as a whole host of other valuable medical data points. And given the success of their recent tests, they believe this can all be powered and directed through ultrasound.

“Ultrasound is continuing to grow in clinical importance as new tools and techniques become available,” said Konofagou. “This work continues this trend.”

Finally, based on the project’s success, Shi and Shepard are also listed as inventors on a provisional patent for the chip design, which the release says was recently filed by Columbia University (Patent Application No. 15/911,973).