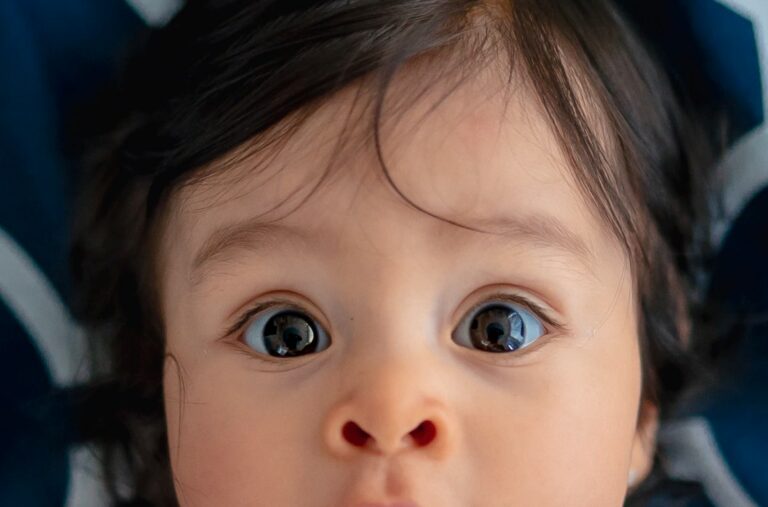 Through a Child’s Eyes: “Backward Masking” Reveals What Babies See That We Can’t

Throughout much of fantasy and horror fiction, very young children can often sense or understand things adults cannot. In actual human biology this is normally the opposite, as babies’ brains are less developed, and therefore less perceptive than adult brains. At least, that’s what scientists thought.

Surprisingly, a group of Japanese researchers have found one particular area of visual perception where fiction may be truer than fact.

“We can generally recognize an object, even if it is presented for a very brief time,” the press release announcing the recent breakthrough states. “However, if another object appears immediately following the first object, the perception on the first object is impaired such that we do not notice its existence.”

This process, called “visual backward masking”, is often used to study how visual information is processed and stored inside the brain. This phenomenon of forgetting the original object or image normally occurs even if the replacement object doesn’t overlap, or even share the same space, as the original. However, according to the latest research, babies, particularly those less than seven month old, appear to not have this limitation, recalling both the original object and the one replacing it with astonishing accuracy.

In hopes of testing this process in children that young, the scientists from Chuo University in Tokyo, whose resulting paper “Perception of invisible masked objects in early infancy” was published in the journal Proceedings of the National Academy of Sciences, the team theorized that based on their stage of development, babies under seven months of age might be able to recall the first object even when an attempt to backward mask the first object was made.

“We applied backward masking to infants aged 3-8 months to examine the development of feedback processing,” said Yusuke Nakashima, a postdoctoral fellow at Chuo University, and the study’s lead author. “Recent studies in vision science revealed the importance of feedback processing in visual perception, but its development is poorly understood.” What they hoped to find was that the youngest children in this age group were indeed able to recall the first image.

To test their hypothesis, Nakashima and his team showed the infants images of various faces on a computer screen, then quickly switched to a second image to test if visual backward masking was occurring. Half of the time they would switch to the image of a mask. In anyone older than 7 months, this predictably results in them only seeing the mask, and never consciously perceiving the face at all.

In the second half of the study, the team would quickly replace the face image with a blank image. In theory, the 3-6 month old’s tested should be able to recall the face image just like older children and adults, and would stare at the blank image while still recalling the first.

“Infants tend to look longer at faces [compared to other images],” the study release states, meaning that if the masking wasn’t taking effect, the researchers could determine whether or not an infant is seeing a face simply based on the length of time they spend looking at a particular image.

Unsurprisingly, the results from the second test were the same as would be expected for anyone over six months. When the blank image replaced the face, the infants continued to stare, indicating that they could still recall the image of the face.

However, when the team looked at the results of the first batch of tests, they found that the children were still able to recall the face image even when it had been replaced by the mask. In effect, the normal visual backward masking the team would expect to see in a more developed brain wasn’t present, allowing babies of this age a seeming advantage that becomes lost as they age.

“These results suggest that feedback processing is immature in infants younger than seven months,” says Nakashima. “That is, younger infants do not have feedback processing that backward masking should interfere, and thus, masking is ineffective for them.”

To confirm their results, the team performed the same tests with infants seven and eight months of age, and found that the visual backward masking was already present, meaning the subjects could not recall the image of the face once the mask image replaced it. “[I]nfants aged 3-6 months could perceive faces even when the faces were followed by the mask image,” the study release concludes, “indicating that masking did not occur and that younger infants could see faces that older infants could not.”

The release also notes that the Chuo University team’s work yielded two distinct results. First, they demonstrated that the brain’s mechanisms for processing visual information as a whole changes drastically in the second 6 months of life, “from the bottom-up system to the system incorporating top-down processing.”

Second, and most surprisingly, their test results showed that a young human’s ability to perceive and recall an object becomes less sophisticated very early in development, at least in this particular circumstance.

“This might seem counterintuitive,” said Masami Yamaguchi, a professor at Chuo University. “Instead, [one would assume] important visual abilities would be acquired by the maturation of feedback processing.”

No immediate plans to follow up on this work were indicated in the study or the release, but the results seem to speak for themselves. As human’s age they gain a great number of abilities, but in at least this one case, scientists have found an unusual skill that disappears almost as soon as it appears.