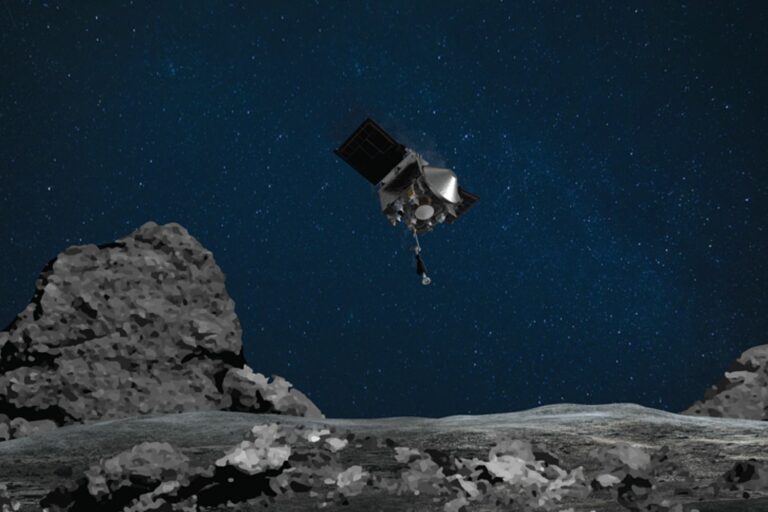 Nearly half a decade ago, NASA’s OSIRIS-Rex spacecraft was launched into space with the mission of collecting rocks and regolith from 101955 Bennu, a near-Earth asteroid. Now, after several years in space, NASA’s spacecraft is on its way back home with a trove of samples it collected during its historic retrieval mission.

OSIRIS-REx, whose official full name is the Origins, Spectral Interpretation, Resource Identification, Security, Regolith Explorer spacecraft, was sent into space to obtain at least 60 g worth of material from the carbonaceous asteroid Bennu. With its samples now in hand, OSIRIS-REx is on its way back to Earth where the samples will be submitted for detailed analysis, which scientists hope will provide new details about the evolution of the Solar System.

Materials scientists expect to find in the samples the NASA spacecraft managed to collect during its mission should offer clues about processes that include early planetary formation in our Solar System, as well as what the origins of many organic compounds that proliferate throughout it may have been.

On May 10, NASA monitored the spacecraft as it fired its main engines at maximum throttle for a period of close to seven minutes, its most challenging feat to date since arriving at Bennu three years ago. Propelling the spacecraft off the asteroid and on a course for Earth, it reached a maximum speed of close to 600 miles per hour, according to a statement from the space agency.

The spacecraft’s departure on May 10 hadn’t been any coincidence, either. At this point in asteroid Bennu’s trajectory, its alignment with Earth facilitated an ideal launch location, placing it in a position to be within 6,000 miles of Earth by September 2023. Distance and timing are keys to the mission’s success, and although OSIRIS-REx has enough fuel to eliminate most concerns about its return trip, NASA aims to use it sparingly in order to preserve as much as it can in the event that the spacecraft ends up extending its mission in order to visit another near earth object before returning home.

Later this summer, NASA is expected to look at whether such a possibility may be feasible, and gauge the likelihood of such an extended mission for the spacecraft.

Barring any additional opportunities for asteroid sample retrieval, OSIRIS-REx is commencing what is expected to be its long journey home, which will bring it back home after another 2.5 years in space. As it approaches the end of its mission, the spacecraft will release the capsule containing samples it has acquired while in space, which concludes the primary phase of its mission. During this stage of the mission, OSIRIS-REx will fire its engines again, orbiting Venus and circling the Sun twice before returning home, with an expected arrival date of September 24, 2023.

The capsule delivery system is designed to separate from the rest of the spacecraft as it enters Earth’s atmosphere. If all goes according to plan, the capsule portion will parachute into Utah’s Western Desert, where it will be retrieved from its landing site within the Utah Test and Training Range.

Peter Antreasian, OSIRIS-REx navigation lead at the California-based KinetX Aerospace, says that regular corrections of the spacecraft’s path will be required “to bring the trajectory increasingly closer to Earth’s atmosphere for the sample release, and to account for small errors that might have accumulated since the last burn.”

In a NASA statement, the OSIRIS-REx mission team said that the mission has provided several valuable learning opportunities so far. Although estimates about Bennu’s smooth shape ended up being inaccurate, the team was able to test other new techniques that allow researchers to predict whether minerals on asteroids like Bennu would be rich in carbon, and possibly also contain traces of ancient water. Such observations are expected to be useful in helping future missions to make accurate predictions about asteroids and other potential space objects that may be studied with probes.