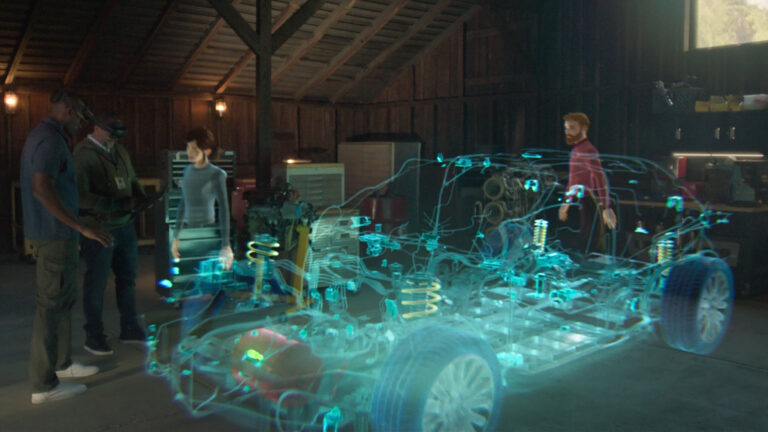 Designed to allow people in different physical locations to create shared experiences across both virtual and physical worlds, it functions through the use of avatars and “holoportation,” a new kind of 3D capture technology that, according to Microsoft, “allows high-quality 3D models of people to be reconstructed, compressed and transmitted anywhere in the world.”

The event featured virtual attendees from around the globe who were able to preview the mixed reality experience as avatars, all taking part in an event in the same holographic world.

Through holoportation, which “beams” the user’s life-like image into a non-physical world, users will have the ability to function as avatars in virtual settings. Powered by the company’s Azure AI, Microsoft Mesh will do more than just power virtual meetings. Through Microsoft’s app HoloLens and the Mesh-enabled AltspaceVR, eventually Microsoft hopes this carries over into applications for smartphones, tablets, PCs, and virtual reality headsets.

The conference attracted some of the biggest names in entertainment, which included Cirque du Soleil co-founder Guy Lailberte, acclaimed director of “Avatar” James Cameron, and the advanced research team OceanXplorer.

“There’s a social component to this that’s essential” vice president of OceanX Vincent Pieribone said to Microsoft Innovation Stories. ”We want to bring everyone into the same ‘room,’ so they can bounce things off each other and have human connection.” From a scientific perspective, the idea would be to bring in, and connect researchers who may not be on that expedition, but to feel like they are there.

The opportunities to use this tech seem limitless. Lailberte hopes to use this as a means for live entertainment (concerts, theater) through his Lune Rouge company’s Hanai World Project.

Brenda Stolyar from Mashable was able to preview Microsoft Mesh during the event, and was able to experience “holding” holographic moons, sharks, and jellyfish. Stolyar considered the detail in the holograms “impressive,” although he noted that the virtual space the preview took place in felt limited.

What Microsoft Mesh is building is a way to connect socially in a way that could be beneficial for entertainment and business industries, as well as possibly educational institutions in the future, and scientific endeavors. You can be anywhere, and collaborate regardless of geographic location and physical boundaries. The idea of being able to “transport” yourself to a place with others and create a shared experience even though you aren’t physically in the same room was explored in Cameron’s blockbuster film “Avatar.” The science fiction film centers around the idea of humans using genetically-engineered avatars to interact with the indegineous alien race of the planet Pandora.

“Mesh enables you to interact holographically with others with true presence, in a natural way,” Nadella said during the conference. “I could join a birthday celebration with my extended family in India, interacting as if we were physically together, without any screens between us, or I could meet my colleagues on the other side of the world and collaborate as though we were in the same room.”

OUTLOOK: Video Conferencing, and Then Some

Microsoft Mesh could be a game-changer in that it attempts to bring the most authentic form of VR yet-seen into use, and the way it may be able to revolutionize social interactions, meetings, entertainment and science is intriguing.

The traditional methods used for gaming, conferencing, research and social media are set for change if Microsoft Mesh takes is the success its creators hope for. Virtual reality, even at its best to-date, has felt clunky compared to what we’ve seen play out in pop culture renditions portrayed in programs like Netflix’s Black Mirror. Since the beginning of the coronavirus pandemic, video conferencing services like Zoom and Microsoft Teams saw record usage, and Microsoft Mesh may well be the next phase of technology to build off of this idea.