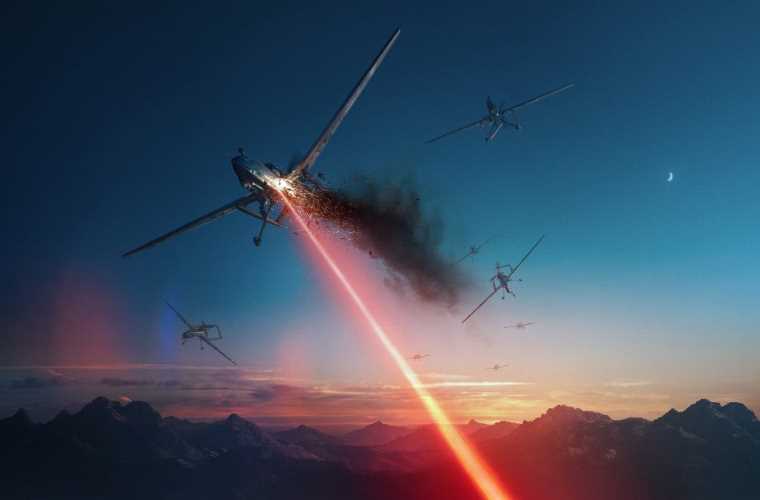 
Militaries around the world know UAVs are a threat. Here is The Debrief's list of the top 7 "Drone Killers."

In the 21st century battlefield, unmanned aerial vehicles (UAVs) are increasingly part of the enemy arsenal. “Drone Killers” have become significantly more important, as these drone platforms move beyond surveillance and into lethal systems. These remote-controlled vehicles can tasked as strike craft and bombers, deployed in “swarms,” operating as a wingman for human-piloted fighters, or operating autonomously using AI.

This expanding range of abilities makes UAVs a growing threat to allied military forces. As Acting Secretary of Defense, Chris Miller told The Debrief in January, “Small unmanned aircraft systems (sUAS) were previously viewed as hobbyist toys, but today it is evident that the potential for hazards or threats has the ability to impact the Joint Force.”https://thedebrief.org/pentagon-releases-new-counter-drone-strategy/

Not surprisingly, this has led to a new wave of counter-drone tools and strategies, many of which are at the very edge of current technology. Some are already being tested, and others are still on the drawing board, but all seem more like science fiction than reality. However, at The Debrief, we focus not only on the cutting edge of science and tech but also on the future. Therefore, here are:

At the 2021 International Defense Expo (IDEX), Emirati defense company Halcon unveiled their radar-equipped anti-aircraft missile SkyKnight. Integrated into the German Oerlikon air defense system, made by Rheinmetall, SkyKnight is specifically designed to neutralize a whole host of airborne threats, including UAVs. As Defense News previously reported, “the counter-drone system was designed to mitigate modern threats such as rotary-wing aircraft, UAVs, rockets, artillery, mortars and other fixed-wing aircraft at a range of up to 10 kilometers.”

“The system is able to detect, track and neutralize small-sized threats,” Halcon CEO Saeed Al Mansoori told Defense News in that report. “It is not a joint venture, we are not participating in the technology; they already have air defense systems, and we already have our missile and canister…We are just integrating the systems together.”

The first such ground-based missile system to be designed and manufactured in the United Arab Emirates, SkyKnight is expected to begin field tests in 2024.

Due to their high level of accuracy and lack of additional munitions, lasers have consistently been developed and tested against several enemy targets, including drones.

The U.S. Navy has one such system, the Lasers Weapon System (LaWS), already mounted on the USS Ponce and has recently deployed the new Optical Dazzling Interdictor, Navy (ODIN) on the USS Dewey. As The Debrief reported at the time, that system can interfere with unmanned aerial system sensors. In that same report, we noted the Navy also plans to deploy Lockheed Martin’s HELIOS system aboard the USS Preble this year.

Not to be outdone, both the U.S. Air Force and the Army are developing drone killer laser systems of their own.

For the USAF, Raytheon’s High-Energy Laser Weapon System (HELWS) is already undergoing field testing to identify and neutralize enemy drones. As Jeff Newson, the company’s director for high-energy laser systems, explained to Defense News, “Raytheon has updated the tracking algorithms and the advanced electro-optical targeting system that helps to identify the drones, with a limitless magazine. The cost per shot is what two people can pay for a cup of coffee, hence the advantages for customers who are going to target very small, cheap drones.”

In 2017, the Air Force Research Lab unveiled a pair of airborne systems (or “spirals” in AFRL parlance) designed to counter enemy drones.

According to a report by Defense Daily, the first spiral, which is the size of a microwave oven and has already been deployed overseas for months, “is designed to precisely disrupt radiofrequency communications between a drone and its operator and push the drone away from protected areas.”

That same report notes that unlike current jamming systems that can inadvertently interfere with friendly communications, this system is more targeted.

The AFRL also unveiled a second system that is essentially a “hunter-killer” drone with a net attached. The system was tested back in 2016 at Robins Air Force Base, where it successfully captured a Phantom 3 drone in mid-flight. Both systems work on entirely different concepts but support the notion that one method for countering enemy drones is deploying drones explicitly designed for that purpose.

Along with lasers, jammers, and drone-capturing drones, systems designed to simply shoot the UAVs out of the sky are also under development. One such pair of systems, the SMASH 2000 Plus Fire Control System and the SMASH Hopper Light Remote-Controlled Weapon Station, was unveiled at IDEX 2021 by Israeli company Smart Shooter.

As The Debrief reported at the time, the company brochure says, “the SMASH 2000 Plus is a sophisticated electro-optical target acquisition and tracking system designed to be attached to small-arms weapons systems. Using advanced proprietary algorithms and sophisticated image processing software, the SMASH 2000 Plus dramatically increases a shooter’s ability to hit their intended target in all-weather and lighting conditions. Based on the original SMASH 2000 system, the SMASH 2000 plus offers an additional advanced counter-unmanned aerial systems mode, giving individual ground troops an accurate hard-kill capability to counter emerging drone threats.”

The company crystalized this point further, stating, “With a unique ‘One Shot – One Hit’ capability, SMASH allows the operator to quickly and effectively neutralize any ground or airborne target, manned or unmanned.”

Microwaves: The Power of THOR

Also on the docket for testing in 2024, a weapon named after the Norse God of Thunder brings an entirely different approach to downing an attacking drone: microwaves. The Tactical High Power Operational Responder (THOR), built at Kirtland Air Force Base, offers a benefit other systems can’t. Specifically, it can spread a wide field of electromagnetic radiation to counter several targets at once.

In an interview with the Albuquerque Journal, Army Lt. General L. Neil Thurgood said, “The Army’s directed-energy capabilities will need to provide a layered defense with multiple ways to defeat incoming threats. High-energy lasers (only) kill one target at a time, and high-powered microwaves can kill groups or swarms, which is why we are pursuing a combination of both technologies.”

As far as a timeline and plans for actual deployment of this drone killer system, AFRL’s Directed Energy Directorate head Kelly Hammett told the Albuquerque Journal. “They intend to procure enough systems for a platoon unit in 2024 to do experimentation with a mix of weapons. They will put microwaves and lasers together in a single unit to assess how to deploy it all.”

Unlike ground-based or even ship-based laser systems, lasers mounted directly on aircraft have long been a dream for military engineers. Now, Lockheed Martin is setting a 2025 timeline for reaching that goal.

A crucial part of the Air Force Research Laboratory’s Self-Protect High Energy Laser Demonstrator, or SHiELD, program, Lockheed Martin indicated that the system results from many years of research and development. “The beam director is the optical system that puts the high-energy light on the target and keeps it there with enough precision to defeat the threat. We spent several years developing producible, low [size, weight, and power] and low-cost tactical beam directors in-house.”

Because the lasers are pod mounted, they are likely poor fits for Stealth aircraft like the F-22 or F-35 Joint Strike Fighter, and therefore will most likely be integrated into larger aircraft like F-15s, F-16s, or even the A-10c Warthog.

Unlike conventional continuous wave (CW) laser systems which are mostly designed to interfere with an incoming drone or missile’s optics, the ultrashort pulsed laser (USPL) would pack enough energy into a short blast to completely disable an attacker’s electronic systems or even blow the thing out of the sky.

“USPL systems are able to neutralize threats via three distinct mechanisms,” the Army’s posting states, “ablation of material from the target, the blinding of sensors through broadband supercontinuum generation in the air, and the generation of a localized electronic interference used to overload a threat’s internal electronics.”

To accomplish this goal, the proposal indicates that the laser must operate in the incredibly powerful terawatt range (current systems only operate in the kilowatt range) and be able to fire all of that energy in a shockingly brief 200 femto-second pulse. For comparison, a terawatt is a trillion watts, as opposed to a kilowatt which is a comparatively paltry 1,000 watts, and a femto-second is essentially a quadrillionth of a second.

Packing that much power into such a short burst means this laser system will be three orders of magnitude more powerful than even the most powerful systems currently in use, and can offer an ultra-precise, ultra-potent option for forces hoping to counter the increasing threat from UAVs.

Outlook: How To Shoot Down A Drone?

Although most of the advanced weapons systems listed above are still in development, even those platforms appear only a few years away from real-world implementation. Until then, UAVs will continue to see an increase in use, as they offer a low-cost option for militaries and other military-style organizations worldwide. Fortunately for the U.S. and its allies, the growing list of “drone killers” now in development appears to offer a veritable array of tactical countermeasures to even the most sophisticated 21st century UAVs.