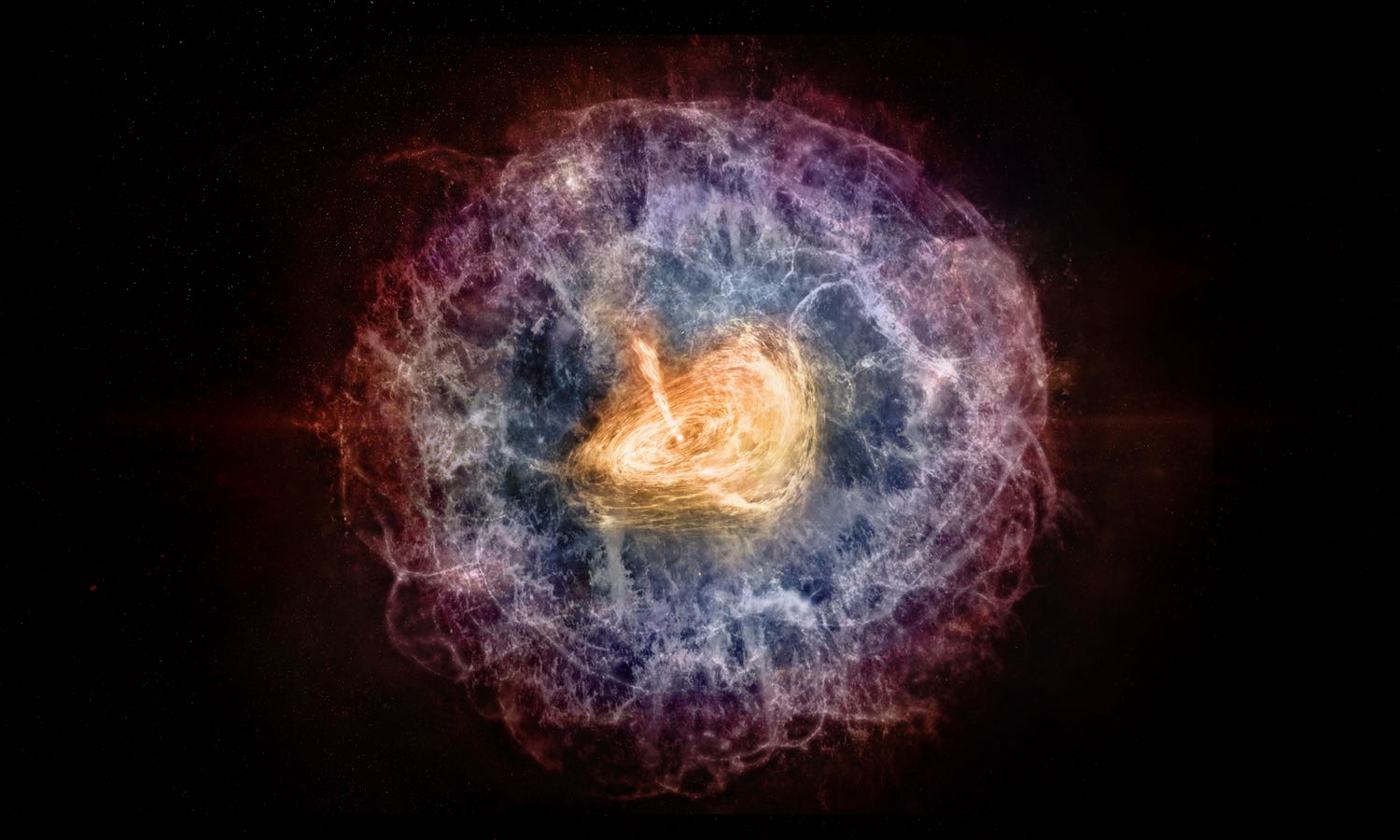 Astronomers pouring over imagery obtained by the Very Large Array Sky Survey (VLASS) in New Mexico recently spotted a transient object they say is unique—and potentially far more energetic—than past examples they have witnessed, according to new research.

In astrophysics, the area of transient astronomy involves the study of short-lived astronomical events or phenomena. Some of these transient objects may last as little as a few seconds, or even fractions of one, while others could persist for several weeks, or even years.

From the enigmatic fast radio bursts of recent years to sudden eruptions of gamma rays and the appearances of novae and supernovae, the primary feature uniting many transient events is their extremity. That is, they usually result from the powerful energy released by the complete or partial destruction of distant celestial objects.

Now, a team of researchers says they may have located one of the most powerful transient objects in its class that astronomers have ever observed, a discovery that could potentially offer clues toward unraveling other unusual phenomena observed in recent years.

The new object, dubbed VT 1137-0337, is believed by astronomers to be a pulsar wind nebula (PWN), also known as a plerion. These objects occur when a nebula forms within the remaining shell of a supernova remnant (SNR). The unique feature of a PWN involves how winds generated by a central pulsar are what astronomers believe powers the nebula.

The discovery of VT 1137-0337 resulted from the analysis of images collected by VLASS, part of an ongoing project of New Mexico’s National Radio Astronomy Observatory, by astronomers Dillon Dong, a graduate student at Caltech, and Professor Gregg Hallinan, his doctoral adviser.

Dong explained to The Debrief that the otherwise monumental task of sifting through the VLASS imagery was made easier by applying filtering that relied on code he wrote, which scanned every image they acquired and identified all of the radio sources present at the time they were recorded. Dong’s program also filtered out artifacts that occasionally turn up in VLASS images, all of which helped him and Hallinan narrow down transient objects that would likely be of interest to their research.

The next step was to take the filtered data and compare that against data from previous radio surveys conducted over the last several decades.

“By cross-matching my catalog of VLASS radio sources with a catalog from a historical radio survey from the 90s and 2000s called FIRST, I identified several thousand variable and transient sources,” Dong told The Debrief, noting that the transient objects he and Hallinan focused on were primarily “sources that have brightened substantially or newly appeared in the radio sky over the past two decades.”

Dong says that several of the transient objects they detected result from far distant black holes that possess relatively compact jets of powerful radio emissions, the likes of which have been discovered in previous studies of VLASS imagery in recent years.

However, during his recent research effort, Dong was more interested in objects that existed closer to us, within an estimated 600 million light-years.

“To find those nearby sources, I cross-matched the catalog of radio variables/transients with a catalog of nearby galaxies,” Dong explained. What he found surprised him.

“As it turns out, there are about 20 transients that are located too close to nearby galaxies to be explained by chance,” Dong told The Debrief, calling the new collection of transient objects—all presumably in nearby galaxies—a sort of “gold mine.”

One of the sources that stood out among those detected by Dong’s code filtering system turned out to be the first known instance involving a stellar collision that is believed to have given rise to a supernova explosion. And there were other transients that caught the eye of Dong and Hallinan, one in particular on account of several unusual features it possessed.

“VT 1137-0337 was another transient that stood out, this time because it had a very unusual flat radio spectrum and because it was fading so slowly,” Dong says. “Both of these properties are unique among known radio transients, and their combination is best explained by an emerging pulsar wind nebula.”

Dong says that the radio emission characteristics displayed by VT 1137-0337 resemble those of known pulsar wind nebula, the most famous of which is the Crab Nebula, located in the constellation Taurus. However, what set VT 1137-0337 apart from other nebulae like it was the amount of energy it produced: close to 10,000 times more than the Crab Nebula.

“VT 1137-0337 one is 10,000x the luminosity of the Crab Nebula,” Dong says, “mostly because the neutron star is young and hasn’t had a chance to slow down. It is also five to 500 times more strongly magnetized than the Crab Pulsar, which contributes to the energy.”

Dong says that astronomers currently think that most neutron stars have their genesis from within supernovae, which as he words it, “carve-out” a nebula that eventually emerges as gas ejected from the supernova becomes transparent.

“This one nicely fits the picture which is why we were able to identify it as a PWN,” Dong says, though noting that it “will be interesting to see if we can find examples of others that may be formed in different ways.”

However, the data Dong and Hallinan are processing could lead to more than just the discovery of transient objects like VT 1137-0337, now believed to be the most powerful PWN ever observed. In addition to being extremely dense, neutron stars are also some of the most magnetic objects in the universe (hence the name magnetar, which simply denotes a neutron star with a highly magnetic field). As highly magnetized neutron stars spin, a wind of highly charged particles is produced, which are ejected from the star at close to the speed of light.

However, even in the case of an object as powerful as VT 1137-0337, the amount of energy required to propel the particle wind outward eventually has a braking effect.

“If you leave the magnet spinning for hundreds or thousands of years, the energy it takes to launch that wind will act as an extremely strong brake and will significantly slow down the rotation” Dong explains.

“That’s the case for pretty much every neutron star we know of in the Milky Way” Dong told The Debrief, who says that “the previous youngest one is about 700 years old and has been slowing down ever since it was born.”

“In our case, we found one that’s less than 80 years old, which provides astronomers an opportunity to directly observe how particularly powerful neutron stars behave when they’re young.” Not only that, but it could also potentially shed light on another great mystery of modern astrophysics: fast radio bursts.

“Some of the leading theories for fast radio bursts claim that they are also due to young, highly magnetized neutron stars,” Dong says. “We haven’t seen any bursts yet from this source, but if we do, that would be an important piece of evidence in confirming this theory.”

Going forward, Dong says he plans to continue to watch VT 1137-0337, although he is always on the lookout for additional evidence of transient features that turn up in the VLASS imagery, and even hints at the fact that there may already have been a few others detected.

“There are many interesting transients left to publish,” Dong told The Debrief, confiding that he plans to “be spending much of the next year writing papers.”