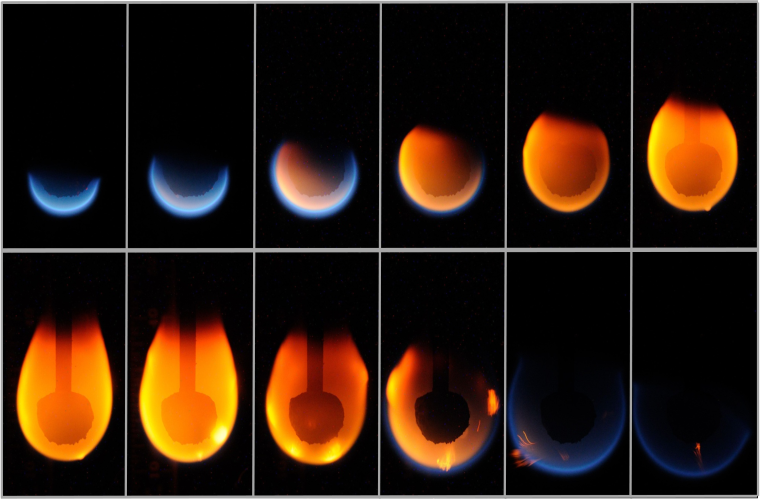 To demonstrate flame growth, decay, and extinction in space, a preliminary test called Burning and Suppression of Solids (BASS) burned a synthetic resin on the space station several years ago. The top row shows the flame growing, while the bottom row shows it going out. Credit: NASA

NASA is Playing with Fire. In Space. Literally.

A new set of NASA experiments will test how fire acts and how to extinguish it in the microgravity environment of space. A follow-up to previous fire-analyzing missions, this decidedly dangerous undertaking hopes to increase fire safety for future colonists traveling to the Moon, Mars, and beyond.

FIRE AND THE MICROGRAVITY OF SPACE DO NOT MIX

On Earth,  engineers often treat furniture, clothing, and building materials to resist fire. In space, engineers also have to factor in fire prevention when designing habitats like the International Space Station (ISS) or its planned successor. Unfortunately, microgravity and its resulting airflow patterns cause fire to behave and spread in entirely different and sometimes terrifying ways. The fact that these patterns only occur in microgravity makes testing them virtually impossible to do anywhere other than space itself.

“Fire behaves differently in space,” explains a recent NASA release detailing the upcoming mission. “Changes in gravity and airflow can alter the way it spreads and make it harder to extinguish.”

This unpredictability is a particular issue for astronauts who can’t always rely on the fire-fighting methods used on Earth. The same problem can affect which materials designers use in their orbiting habitat and which ones are forbidden. Such concerns are increasingly critical as NASA and the world’s other space agencies move forward with plans to set up human colonies beyond Earth or its immediate orbit.

“With NASA planning outposts on other planetary bodies like the Moon and Mars, we need to be able to live there with minimal risk,” said Paul Ferkul, a SoFIE project scientist at NASA’s Glenn Research Center. “Understanding how flames spread and how materials burn in different environments is crucial for the safety of future astronauts.”

Designed to run in the ISS’s Combustion Integrated Rack, SoFIE will test different materials and combustion patterns, and methods for extinguishing different types of flames.

NASA describes those experiments as follows:

Given the hazardous nature of fire in any environment, these experiments are undoubtedly as risky as any of the space station’s habitats will perform. However, the information they can provide for future astronauts and space colonists alike makes these efforts incredibly valuable as well.

UFOs Disabled Weapons at Nuclear Facilities, According to These Former USAF Officers

“On Earth, gravity has a profound influence on flames,” explained Ferkul, “but in the reduced gravity of space, fire can behave unexpectedly and could be more hazardous.”