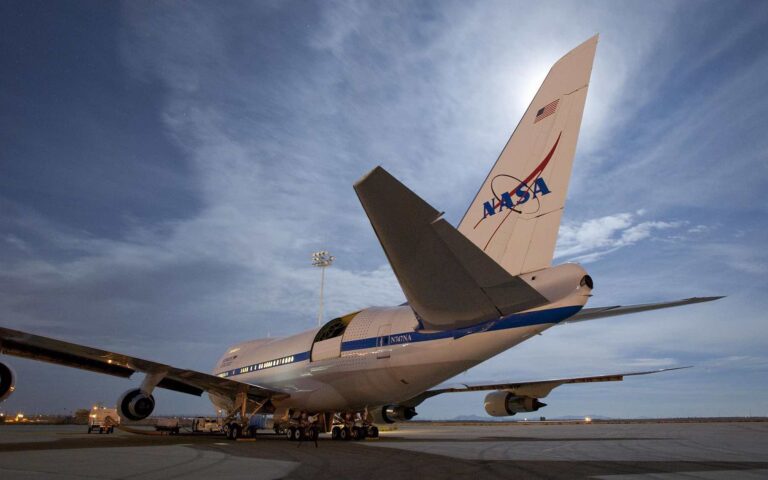 NASA’s premier mobile observatory designed for studying Earth’s stratosphere recently touched down in Santiago, Chile in what will be its first visit to the South American country, according to the American space agency.

Like the James Webb Space Telescope, NASA’s Stratospheric Observatory for Infrared Astronomy (SOFIA) is also equipped for scanning the skies in the infrared portion of the spectrum with a reflecting telescope mounted aboard a Boeing 747SP.

On Friday, March 18, 2022, the large aircraft landed at the Santiago International Airport to begin several weeks of observations of the sky from the Southern Hemisphere, allowing NASA and its partners with the German Space Agency at DLR to study features of the night that can only be observed from such latitudes.

TOUCHDOWN! We’re in Santiago, Chile to study the cosmos from the Southern Hemisphere. ✈️🌌 https://t.co/SOc1OvWNSj

SOFIA is a specially modified Boeing aircraft fitted to carry a 106-inch (2.7 meter) reflecting telescope to altitudes as high as 45,000 feet, which allows it to coast above the largest portion of Earth’s atmosphere that blocks infrared, and study regions of space that cannot be viewed using ground-based telescopes.

Along with its ability to peer beyond Earth’s atmosphere during its high altitude flights, SOFIA’s ability to travel to almost any point on Earth also allows it to view important astronomical events within limited timeframes that many ground-based telescopes, due to their fixed locations on Earth, would be unable to view.

NASA has expressed excitement about SOFIA’s recent arrival in Santiago, where it will spend the next two weeks fulfilling a busy schedule that will include eight scientific flights.

“We are thrilled to deploy to Chile so we can provide more access to the Southern Hemisphere skies for our scientific community,” says SOFIA project scientist Naseem Rangwala, who expressed NASA’s appreciation “for the opportunity to do that from Santiago.”

Rangwala adds that NASA will be accelerating the rate of deployment for this short-term mission “with a focus on efficiency and prioritized targets.”

The SOFIA team will mainly be focusing on a pair of galaxies, the Large and Small Magellanic Clouds, according to a recent post at the SOFIA blog.

“Both [galaxies] are gravitationally bound with the Milky Way and will eventually merge with our galaxy in several billion years,” wrote Maggie McAdam in Friday’s blog post.

Normally, SOFIA’s deployments would entail as many as 25 or more scientific flights, which collect information using a wide array of instruments onboard the aircraft. For its shorter Chilean research effort over the next two weeks, the SOFIA team will be focusing on the use of just one of these instruments, the Far Infrared Field Imaging Line Spectrometer (FIFI-LS) which will allow a number of celestial targets that can only be viewed from the Southern Hemisphere to be observed.

Other targets of SOFIA’s mission in the coming days will be the remnants of ancient supernovae, with an emphasis on collecting data that will help determine how these stellar events have contributed to the prevalence of cosmic dust throughout the early universe.

Among NASA’s primary targets during observation of these neutral hydrogen clouds is the presence of lithium, which is significant because of the way it may help astronomers understand a discrepancy that exists currently between the abundance of lithium that should exist as a result of the big-bang as compared with those observed by astronomers.

“SOFIA will also attempt its first observation to measure the primordial abundance of lithium by looking into the halo of our galaxy where clouds of neutral hydrogen can be found,” McAdam wrote at the SOFIA blog. These massive clouds possess unique properties that include gases that remain essentially in the same state as they appeared during much earlier phases of the evolution of our universe, and could help to resolve the apparent discrepancy involving the universe’s missing amounts of lithium.

Richard Glenn, the U.S. Embassy Chile Chargé d’Affaires, said that the work SOFIA will be conducting over the next two weeks builds on “Scientific collaboration, particularly in astronomy, [that] has been a cornerstone of the U.S.-Chile relationship,” noting cooperative scientific efforts between the two nations date back more than 170 years, coinciding with the establishment of the Observatorio de Cerro Santa Lucia in Santiago.

“NASA’s SOFIA deployment to Chile is the next exciting milestone in that relationship,” Glenn said, “bringing us closer to the stars than ever before.”

To learn more about SOFIA and its past missions, visit NASA’s official SOFIA page, and follow the Chilean mission’s progress at the SOFIA blog.