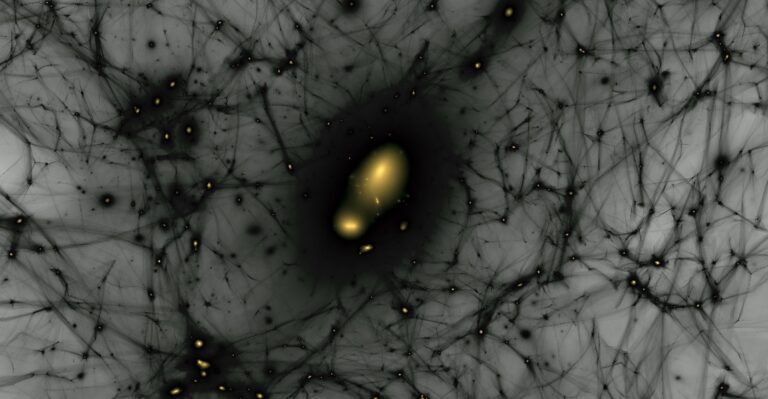 In a recently published study, theoretical particle physicists from the University of California Riverside propose dark matter might be explained by the existence of a new extra-dimension in space-time.

In astrophysics, dark matter is a theoretical form of matter that makes up approximately 85% of the matter in the universe. The existence of this invisible force is implied through a variety of observations in the universe, including gravitational effects that cannot be explained by accepted theories of gravity. Because dark matter does not appear to absorb, reflect, or emit electromagnetic radiation, measuring or providing definitive proof of its existence has remained elusive.

In a research paper published in the Journal of High Energy Physics, a team of physicists from UC Riverside says the presence of a fourth dimension could account for the existence of dark matter and explain why it remains invisible.

“Our observed universe has three dimensions of space. We propose that there may be a fourth dimension that only the dark forces know about. The extra dimension can explain why dark matter has hidden so well from our attempts to study it in a lab,” said Dr. Flip Tanedo, an assistant professor of physics and astronomy at UC Riverside, and co-author of the new study, in a press release.

The existence of an unseen forces in the universe was first proposed by mathematical physicist and engineer William Thomson in 1884. Also known as Lord Kelvin after being the first British scientist to be elevated to the House of Lords, Thomson estimated the mass of the Milky Way galaxy differed from the mass of visible stars, concluding that “many of our stars, perhaps a great majority of them, maybe dark bodies.”

In the ensuing century, scientists have made numerous indirect observations supporting Thomson’s proposed existence of “dark bodies,” or the presence of some type of unseen matter that plays a significant influence on the universe.

The primary evidence for the existence of an invisible force comes from calculations showing galaxies would not form or move the way they do unless the universe contained a large amount of unseen matter. Further evidence has been noted in measurements of the cosmic microwave background or with redshift-space distortions.

So far, scientists have not been able to directly detect dark matter, leading most physicists to conclude the substance must be made up of non-baryonic particles or subatomic particles that’s mass is less than that of a proton. Indirect evidence, however, has been strong enough to lead the majority of the scientific community to generally accept that dark matter exists.

“We live in an ocean of dark matter, yet we know very little about what it could be,” said Tanedo. “It is one of the most vexing known unknowns in nature. We know it exists, but we do not know how to look for it or why it hasn’t shown up where we expected it.”

“The goal of my research program for the past two years is to extend the idea of dark matter ‘talking’ to dark forces,” Tanedo said in the UC Riverside press release. “Over the past decade, physicists have come to appreciate that, in addition to dark matter, hidden dark forces may govern dark matter’s interactions. These could completely rewrite the rules for how one ought to look for dark matter.”

Tanedo explains that this “dark forces” operation can be mathematically described by a theory that includes an extra fourth dimension. Dark matter would appear as a continuous sequence of adjacent particles within this proposed fourth dimension, allowing for self-interaction through a continuum of low mass states. Researchers say this would explain how dark matter causes some of the curious behaviors seen in small galaxies.

Though the existence of a new fourth dimension sounds sensational, Tanedo explained that extra-dimensions are simply a mathematical trick to describe “conformal field theories,” or ordinary three-dimensional theories that are highly quantum mechanical. The view that existence is made up of extra-dimensions is more commonly referenced by String Theory or the holographic principle.

“Since these conformal field theories were both intractable and unusual, they hadn’t really been systematically applied to dark matter,” explained Tanedo, who says he fell in love with physics after reading, The Physics of Star Trek. “Instead of using that language, we work with the holographic extra-dimensional theory.”

Steam is Banning Blockchain-Based Games on Their Platform, But Advocacy Groups are Fighting Back

Outlook: A Fourth-Dimensional Route To Understanding

Past examinations of dark matter have focused mainly on theories that explain behaviors similar to visible particles. Tanedo and his fellow researchers say their new fourth dimension approach explores some of the “more extreme types of theories” and represents something “fresh and different.”

Researchers say the continuum force of these invisible particles would be vastly different from the forces felt by ordinary matter. “For the gravitational force or electric force that I teach in my introductory physics course, when you double the distance between two particles, you reduce the force by a factor of four. A continuum force, on the other hand, is reduced by a factor of up to eight,” Tanedo explained.

In the paper, the UC Riverside physicists say they found that a continuum force like they propose could replicate observations of stellar movements in the universe.

Tanedo’s team says they intend to continue expanding on their theory by exploring a “dark photon” model.

“It’s a more realistic picture for a dark force,” said Tanedo. “Dark photons have been studied in great detail, but our extra-dimensional framework has a few surprises. We will also look into the cosmology of dark forces and the physics of black holes.”