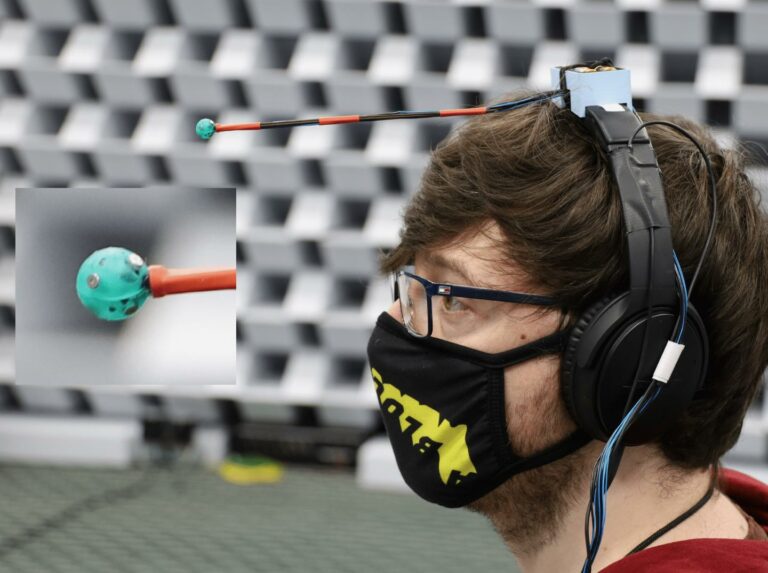 The human ear has an impressive range of sound detection, but almost any pet owner will tell you that dogs can hear things we simply can’t. For the most part, such sounds originate in the ultra-high frequency, or ultrasonic range and are simply out of a human’s ability to hear.

In hopes of providing pet owners the same abilities of their canine friends, as well as a host of other animals that can detect ultrasonic sounds, a group of Finnish researchers have built a simple software-controlled device that, when paired with a set of headphones, can give pretty much anyone the ability to hear ultrasonic sounds. Plus, the researchers say, this includes the ability to track and locate the source of the sound as well.

A typical human ear can hear and detect the origin of most everyday sounds, as long as they land somewhere between 20 Hertz (Hz) and 20 kiloHertz (kHz). As already mentioned, canines are famous for their ability to detect sounds at even higher frequencies ranging anywhere from 47 kHz to 65 kHz. Still, although dogs can detect ultrasonic sounds, they don’t produce them.

Bats, on the other hand, can not only detect ultrasonic sound waves, but emit their own ultrasonic ‘screams’ to navigate via echolocation. These screams typically occur anywhere between 20 kHz, the very limit of human perception, all the way up to 200 kHz, well beyond the detectability of even man’s best friend, making these flying rodents a perfect subject for the Aalto University team’s research.

‘In our study, we used bats in their natural habitat as sources of ultrasonic sound,” said Pulkki. “With our new technique, we can now hear the directions-of-arrival of bat sounds, which means we can track bats in flight and hear where they are.”

To accomplish this superhuman feat, Pulkki and his team, whose research appears in the June 2 edition of Springer Nature Scientific Reports, built a device that can record ultrasound using an array of microphones which were flush mounted and evenly distributed over the surface of a small sphere. This sphere was then placed near the bats, in this case a species of northern bat called Eptesicus nilssonii which is common in Finland, and the team started recording.

Using a computer and software, the recorded ultrasonic signals were instantly ‘pitch-shifted’ to lower frequencies that humans can detect, and then played back through the human subject’s headphones. As hoped, the resultant signal allowed the human subjects to not only hear and detect the ultrasonic screams emitted by the airborne bats, but also determine with a high level of accuracy what direction they were coming from.

“A sound-field analysis is performed on the microphone signals, and as a result we obtain the most prominent direction of the ultrasonic sound field and a parameter that suggests that the sound comes only from a single source,” said Pulkki, explaining the microphone capture and software processing of the ultrasonic bat sounds. “After this, a single microphone signal is brought to the audible frequency range of human hearing and its single-source signal is played back on the headphones so that the listener can perceive the source from the direction the sound was analysed to arrive.”

A separate test confirming the accuracy of their system for locating the origin of the pitch-shifted sounds is included in a 99 second video provided by the Aalto team. In that test, a set of speakers were spaced across a beam, then subjects were asked to identify which speaker had emitted the sound.

Outlook: The Future of Ultrasonic Audio

The study notes that although an external computer and separate software is currently employed to shift the ultrasonic audio into a detectable range, it may be possible in the future to do so using electronics attached directly to the headphones, eliminating the virtual middle man.

As for possible commercial or industrial application for their super hearing system, the team points to a range of possibilities, including detecting otherwise hard to find high pressure air leaks that can sometimes emit sounds in this range. The crew of the International Space Station faced this exact issue between 2019 and 2020, and as a result spent months tracking down and ultimately fixing a pair of leaks.

Near-earth asteroid may be broken off chunk of the moon

“Finding sources of ultrasonic sound is also useful in many practical situations, such as finding leaks in pressurised gas pipes” said Pulkki, whose same video shows their system detecting just such a leak. “Minor pipe leaks often produce strong ultrasound emissions not detected by normal hearing. The device allows us to spot the sound source quickly.”

There also seem to be potential military applications, especially for soldiers on the ground who may run into ultrasound weapons they want to avoid, although none of those applications were specifically addressed in the study.

As one final possible application, the Finnish researcher notes that this type of device could help repair teams in the high tech industry.

“Sometimes, damaged electrical equipment also emit ultrasound, and the device could be used for locating faulty equipment faster in places such as data centres,” Pulkki says.

You can read more about Professor Ville Pulkki and the current research being undertaken at the Aalto University Department of Signal Processing and Acoustics at their website.