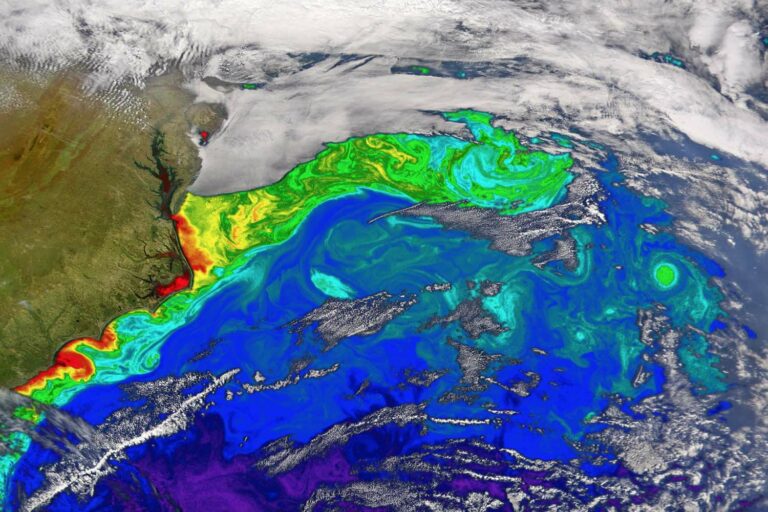 One of the most significant contributors to climate and its effects on our planet involves the role our oceans play in redistribution of heat around the globe.

Key to understanding these climatic dynamics is the Atlantic Meridional Overturning Circulation, or AMOC, arguably one of the most important elements of our planet’s broader climate system. The AMOC involves the movement of warm ocean water northward in the upper (that is, more shallow) Atlantic waters, as well as a colder flow at deep Atlantic depths which is carried southward.

Largely, this is part of the global system of salty ocean water which moves respective to temperature, which is called thermohaline circulation. Scientists have long known that disruptions in Atlantic Ocean circulation can be a key contributor to climate changes, especially those which occur within short periods. At the end of the last geological epoch, known as the Pleistocene, cool meltwater that flowed into northern Atlantic waters is believed to have caused disruptions which might have contributed to periods of cold reversal as Earth was emerging from the ice age.

Now, according to a new study conducted by a group of Irish, English, and German scientists, the AMOC appears to be moving more slowly than it has in close to 1600 years.

The study, led by Levke Caesar, Ph.D., with the Irish Climate Analysis and Research Units (ICARUS), Department of Geography, Maynooth University, Maynooth, Ireland, compared several climate proxies to reconstruct the behavior of the AMOC since as early as around 400 AD. The result of the team’s reconstruction showed that periods of weakened AMOC occurred close to the beginning of the 19th century, along with “a second, more rapid, decline in the mid-twentieth century,” which resulted in what the team called “the weakest state of the AMOC occurring in recent decades.”

The concerns raised by such research are obvious, since weaker circulation of ocean currents will almost inevitably affect global temperatures and climate patterns. Additionally, some scientists believe that the slowing effect that this research describes is directly linked to climate change, and that if the Atlantic Ocean circulation continues to weaken it may result in further global climate concerns.

However, some questions remain about the data in the new study, and what changes in Atlantic Ocean circulation could mean more broadly for Earth’s climate. Dr David Ferreira, Associate Professor in Meteorology at the University of Reading, notes that there are some limitations to the data the proxies used in the recent study are able to provide.

“It is important to recognize that the proxies used in the NG study offers a coarse view of the AMOC both because their limited spatial sampling and their indirect link to the AMOC,” Ferreira told The Debrief in an email. “These should be compared to the full power of on-going modern measurements which still provide an incomplete view of the AMOC.”

“One point that came out of the modern measurements (backed up by climate models) is that AMOC changes are not uniform,” Ferreira also says.

Of particular relevance here is the northward movement of heat through the Atlantic, which at around 24.5°N peaks at approximately 1.3 pettawatts (PW), roughly one quarter of the entire planet’s heat flux. This results from both the northward moving warm Gulf Stream waters, as well as the cooler deep movement described earlier, which gives off heat into the atmosphere. Thereafter, winds carry this heat eastward, which contributes significantly to the generally mild climate of Northwestern Europe.

Since April 2004, the Rapid Climate Change-Meridional Overturning Circulation and Heatflux Array program has monitored the AMOC at 26.5°N Latitude to observe variability in its occurrence over time. The project, a joint operation between the National Oceanography Centre (Southampton, U.K.), the University of Miami’s Rosenstiel School of Marine and Atmospheric Science (RSMAS), and NOAA’s Atlantic Oceanographic and Meteorological Laboratory (AOML), has gleaned from numerical models that the AMOC is likely to weaken by close to 30% in the coming century, which the program associates with greenhouse gas emissions.

“Changes seen for example at the RAPID array near 26N are not mirrored in other latitudes,” Ferreira told The Debrief.“The conveyor belt view, which implicitly assumes that all parts move together, does not always apply. For example, the weakening of the AMOC in the northern Atlantic does not automatically imply a weakening elsewhere in the Atlantic basin.”

Following the recent study’s publication in Nature Geoscience, some outlets have referred to the Gulf Stream off the coast of the Eastern United States as essentially synonymous with the AMOC. However, here Ferreira also makes a distinction.

“I pointed out that the Gulf Stream and AMOC should be distinguished because they both transport heat northward,” he explained in an email to The Debrief. “Roughly speaking it is a half and half job for the Atlantic Ocean. The atmosphere also contributes a lot to the heat transport toward higher latitudes (actually more than the ocean).”

Speaking with the study’s lead author, CBS News quoted lead author Caesar in response to questions about what the hypothetical “tipping point” would be for a total shutdown of the AMOC. “The problem is that we don’t know yet at how many degrees of global warming [would be required] to hit the tipping point of the AMOC,” Caesar explained, adding that “the more it slows down the more likely it is that we do.”

Ultimately, should the Atlantic Ocean circulation ever reach this proposed tipping point, it is still unclear what the actual result may be, and how the global climate will be affected. However, if the past is any indication, the potential for rapid, disruptive climate change is certainly a possibility, if not a likelihood.

According to the RAPID project, “paleoclimate records suggest that during the last Ice Age the MOC has undergone abrupt rearrangements that were responsible for a cooling of European climate of between 5-10°C.”

While temperature changes of 5-10° may appear to be insignificant at a glance, they could contribute to significant issues for many people around the world.

As Alan Buis writes at NASA’s Global Climate Change Website, even smaller temperature changes could have potentially severe results. “At 1.5 degrees Celsius warming, about 14 percent of Earth’s population will be exposed to severe heatwaves at least once every five years,” Buis explains, “while at 2 degrees warming that number jumps to 37 percent.”