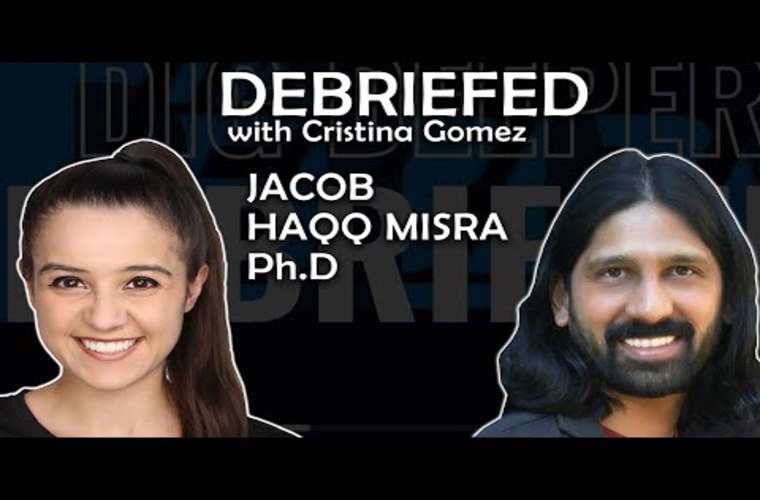 Our guest on Episode 4 of Debriefed: Dig Deeper this week, is research scientist Dr. Jacob Haqq-Misra, who is a senior research investigator at Blue Marble Space Institute of Science.

Dr. Haqq-Misra’s areas of focus include planetary habitability, extraterrestrial life, environmental ethics, and space settlement. He completed his Ph.D. in meteorology and astrobiology (2010) and his M.S. in meteorology (2007) from Penn State University. He also holds B.S. degrees in astrophysics and computer science from the University of Minnesota (2005). He works from his home office in Delaware.

Dr. Haqq-Misra is a member of the American Geophysical Union and the International Astronomical Union. He also serves on the METI International advisory council and the IAA SETI Permanent Committee. He also participates in community engagement events and is periodically interviewed for science news, radio, and television.

The Earth has been leaking radiation for just over a century, when we ushered in the radio age and then when we brought in the era of television. And if any technologically advanced civilizations among the stars had a powerful antenna about the size of our solar system, they might be able to pick up a few of those diffuse signals from bygone eras.

How many exoplanets harbor intelligent alien life, and if the alien life is sentient, are they broadcasting their extraterrestrial presence by beaming out similar radio and other bandwidth signals into the Universe.

But now some private citizens, scientists, and entrepreneurs are sending more focused messages through the cosmos, which could theoretically be intercepted by smaller antennae, essentially advertising the existence and location of Earth.

Dr. Haqq-Misra wonders if there are civilizations across the Universe that have, or are doing the same thing. He asks “Can we detect them if they are in our neighborhood of the Galaxy?”

To this end , Dr. Haqq-Misra is looking forward to the launch of the James Webb Space Telescope in October of this year (2021).

In this episode of Debriefed, Dig Deeper, Cristina Gomez ask Dr. Haqq-Misra questions about his specific fields of research, including the Trappist-1 Star System, and the many rocky worlds which orbit in the star’s habitable zone, also known as the Goldilocks Zone. Could these worlds have allowed complex life to evolve..?

Cristina also asks Dr. Haqq-Misra about binary star systems, and how difficult would it be for worlds to find themselves in stable orbits in such systems.