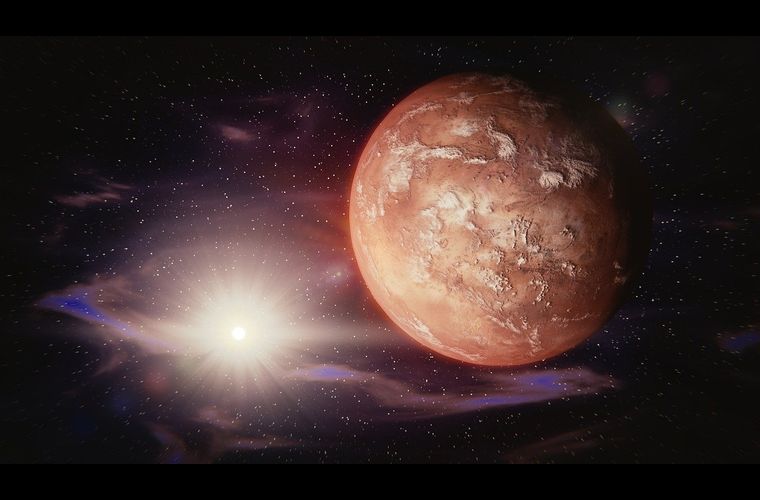 Researchers from the American Geophysical Union look into newly discovered ice caps on Mars to learn more about the planet's beginnings. (PC Pixabay.com)

Ever since its discovery, the planet Mars has been shrouded in mystery. Because of its location in our solar system and the tantalizing possibility of having life on its surface, the planet has been a popular subject of study for many individuals, from amateur astronomers to astrophysicists.

One of the recent fascinations with Mars has been its polar ice caps, which have trapped carbon dioxide. Ice caps can reveal what the planet was made of eons ago. But the ice caps aren’t the only area of the planet to analyze.  In a new study, scientists from the American Geophysical Union (AGU) have discovered ice deposits on Mars’ southern hemisphere, hinting at more information about the planet’s beginnings.

The ice that is found on Mars is similar to dry ice that people use in science experiments or for special effects. Martian ice is made by trapping CO2 and dust in the atmosphere. The planet has two permanent polar ice caps. The northern cap has around 1.6 million cubic kilometers of ice in diameter, while the southern cap has around a 350-kilometer diameter. During the summer, the ice evaporates and then refreezes in the winter. While the ice caps have been studied for decades, they’re slowly losing their definition as they have lost ice deposits and fine details over time, making it harder to gain new information from them.

The scientists at AGU decided to study a set of newly found ice craters in the southern hemispheres to see if they could learn more about the planet’s history. Like Earth, Mars’ ice formation process is affected by temperature and other planetary dynamics, like sunlight, orbit, and tilt. While ice caps were studied previously, these craters were much newer, and could thus give more information. According to the lead researcher Michael Sori, a planetary scientist at Purdue, the craters in question were “exceptionally well-preserved.”

Using photographs from NASA HiRISE Imagery, the researchers were able to analyze the ice layers’ thicknesses and shapes. From their analysis, published in Geophysical Research Letters, the team found that the changes in the ice matched the patterns of the planet’s orbital and tilt shifts over the past five billion years. This confirmed previous theories on the planet’s shift in dynamics, as well as hinted at other events in its past.

As their work improved on previous studies, the researchers are certain that these ice craters will continue to be studied to give more information about the planet’s history of climate change. According to Sori, “Mars is a natural laboratory for studying orbital controls on climate.” Because much of the Earth’s climate is affected by human activity, it can be difficult to study. With no humans, Mars provides a nicer alternative. The researchers are hopeful that one day they can study actual ice cores from the planet instead of images. But as of now, images are the best method as science keeps analyzing our planetary neighbor.