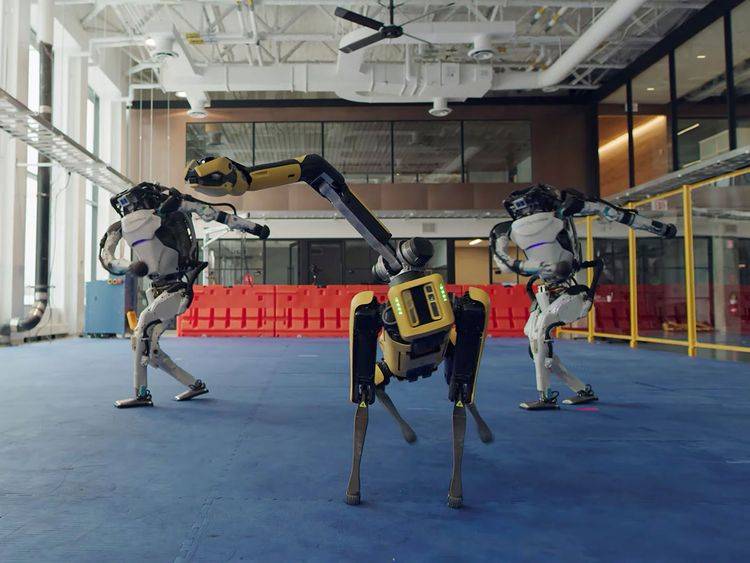 Our Future Robot Overlords Will Have Sick Dance Moves

Boston Dynamics, one of the leading global mobile robot developers, has recently released a video showing their highly popular robot lineup in action. In tackling some of the toughest robotics challenges, the company wanted to show the public just exactly what they’ve been up to lately. In the video below, Atlas, their humanoid robot, Spot, the dog-shaped robot, and Handle, the box-juggling robot, took center stage as The Countours “Do You Love Me” began to play. The dance that happened next needs to be seen to be believed.

BACKGROUND: Who Is Behind This?

Initially founded in 1992 after breaking off from the Massachusetts Institute of Technology, Boston Dynamics’ goal is to “combine the principles of dynamic control and balance with sophisticated mechanical designs, cutting-edge electronics, and next-generation software for high-performance robots equipped with perception, navigation, and intelligence.”

Their first major success came with its dog-like quadrupedal robots developed for DARPA, the Defense Department’s research and development organization. This would evolve into the commercialized version of the Spot robot, which is currently on the market.

In 2018, Boston Dynamics showcased the Spot robot attempting to do “The Running Man” dance to the popular song, “Uptown Funk.” The new video shows how far the company has come with all of the mobility issues they may have had in the past and how much the robots have evolved.

ANALYSIS: Do The Robot Dance

The purpose of showing off the “dancing robots” is two-fold for Boston Dynamics.

The first highlights the organic quality of stable motion that humans often associate with natural movement but implemented in robots with legs. Unlike wheeled or track robots, these robots can navigate and overcome the challenges of obstacles and rugged terrain with this dynamic mobility.

The second reason for showing off the smooth, perfectly choreographed dance chops of the robots is to bring fun to autonomous robots’ evolution. Many videos of these robots have left people feeling uncomfortable due to their rigid movements and focused tenacity at completing tasks.

Boston Dynamics wanted to go into the New Year with some light-hearted fun in an attempt to show how much their robots have evolved. On their official Twitter account, they stated that “Our whole crew got together to celebrate the start of what we hope will be a happier year.”

Our whole crew got together to celebrate the start of what we hope will be a happier year. Happy New Year from all of us at Boston Dynamics. https://t.co/Uys5RMfBqO pic.twitter.com/rY7Xk1BRZN

OUTLOOK: Robot Dance With Me To The End of the World?

Currently, the “Dancing Robots” video has racked up over 20 million views on YouTube, showing no signs of slowing down. And neither do the robots or their creators. Boston Dynamics plans on posting more videos of the robots dancing. And while Spot is the only robot currently on the market, the prototypes of both Atlas and Handle are well on their way to becoming the next dance sensations.

With one of the most unusual and tumultuous years behind us, these three robots indeed show that anything is possible as we move forward. That is, of course, before the Terminator-like invasion begins to the soundtrack Dirty Dancing.