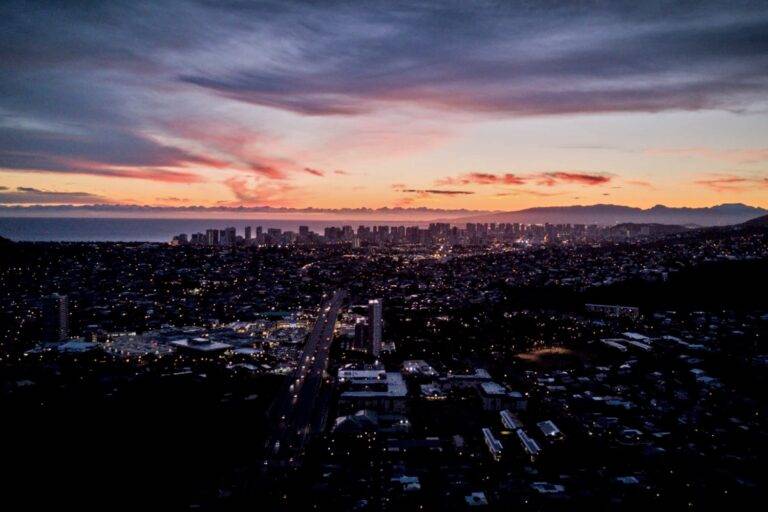 An unusual light that recently appeared in the night sky over Honolulu resulted in 911 calls to local law enforcement, as well as inquiries with the Federal Aviation Administration (FAA) about whether an aircraft might have crashed into the ocean.

The unidentified aerial object also appeared to enter the ocean according to some observers, and was later followed by the appearance of a similar white light, one witness said.

Presently, the source of the mystery lights remains undetermined.

One of the earliest reported observations occurred at 8:26 PM, according to Misitina Sape, who managed to capture images of the unusual blue-colored light as it passed over Haleakala Avenue, Nānākuli, in Oahu’s Waiʻanae District.

The Honolulu Police Department received several 911 calls about the incident, who contacted the FAA to notify them about the possibility that the object might be an aircraft that went down off the Leeward Coast.

“The FAA was contacted by local law enforcement officials on Dec. 29 about a possible plane down in the area,” FAA spokesman Tony Molinaro told The Debrief.

“However, there were no reports of overdue or missing aircraft and we saw no indication on radar of any accident,” Molinaro said. The FAA advised The Debrief contact local law enforcement.

Prior to contacting the FAA, The Debrief also reached out to the Honolulu Police Department, who by the time of publication had not yet replied to our requests for further details about the incident.

One group of witnesses, observing the object from a vehicle traveling on the Farrington Highway outside the Board of Water Supply facility, watched the object as it apparently descended into the ocean, according to investigative reporter Allyson Blair who broke the story for Hawaii News Now.

The unidentified aerial object, which one witness described as being larger than a telephone pole, apparently entered the water, after which its illumination could still be seen for some time.

The same witness, identified only by the name “Moriah” by Hawaii News Now, said that shortly after the blue object plunged into the ocean, a smaller white light appeared, following the same path the blue object had previously taken.

A spokesperson with the Honolulu Police Department previously stated that they had no additional information about the unusual lighted objects, which presently remain unidentified.