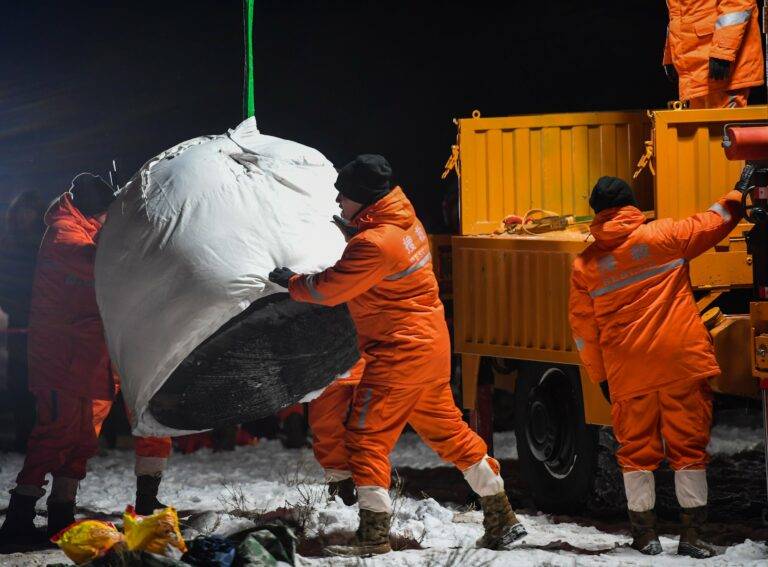 
Experts say exoskeletons are no longer Science Fiction but a soon-to-be part of everyday life.

China recently deployed a recovery team into a remote, snow-laden part of Inner Mongolia to recover the lunar material brought back to Earth by the Chang’e 5 spacecraft. To help the team set up a small command post, carry large packs of gear, and navigate the remote area successfully, they were issued exoskeletons. The recovery team was able to carry almost double the normal amount of weight through snowy and rugged terrain, according to sources speaking to the South China Morning Post.

Though the 1986 film Aliens firmly established exoskeletons in science fiction, they have in recent years become an essential part of life for many people, and exoskeleton companies are now experiencing economic growth as a result.

“This may surprise people but many exoskeletons are already fully developed and in regular use, especially in medical and occupational settings,” Dr. Karl Zelik, a mechanical engineering professor at Vanderbilt University and the Chief Science Officer and co-founder of exoskeleton technology startup HeroWear, told The Debrief via email. “Even now, the car you drive may have been assembled in part by exoskeleton-augmented workers.”

BACKGROUND: What is an Exoskeleton?

After a successful mission to the Moon, the Chang’e 5 probe returned to Earth last week carrying over four pounds of lunar rocks and dust. The probe landed in North China’s Inner Mongolia Autonomous Region, in a snowy and rugged area near the Russian border.

The recovery team was able to quickly secure the precious probe using exoskeletons developed by the Human Function Enhancement Technology Research Center, part of the state-owned China Aerospace Science and Industry Corp (CASIC). The same system is used by Chinese soldiers patrolling their border with India in the challenging Himalayas.

“Since 2014 several medical exoskeletons have received FDA approval. These devices can enable paralyzed individuals to stand up and walk, or help rehabilitate a person after a stroke, and are currently in use in clinics and patient homes,” related Dr. Zelik.

According to Zelik, Toyota has made exoskeletons a required piece of protective gear for certain jobs on its assembly line, with other automotive companies and aerospace manufacturers following suit.

“As another example, I co-founded a company called HeroWear that makes a back-assist exosuit (soft exoskeleton),” Zelik explained. “We launched our first product (Apex exosuit) in March 2020 and it’s already being put to use in over 30 states and 12 countries, across various industries.”

ANALYSIS: The Rise of Exoskeleton Technology

“Exoskeletons are more fully developed and practical to use than most people realize. I expect to see a rapid acceleration in the use and adoption of exoskeleton technology over the next few years, and the general public will become increasingly familiar with real-life exoskeletons (not just the Hollywood depictions),” said Zelik.

There was a major turning point in exoskeleton development a few years ago. Every company was trying to build an Iron Man suit, but the market apparently had little need for such complicated and expensive technology.

Exoskeleton companies changed their models when they “started listening deeply to end-users and designing devices that match specific user needs and use cases,” Zelik explained. The vast majority of exoskeletons in use today are “passive or quasi-passive”—in other words, they use springs rather than motors and batteries to assist the user. While perhaps less exciting for use in cinema, this simplification makes them easier to use and more cost-effective. The exoskeletons used by the Chang’e recovery team were passive and required no external power supply.

The market for exoskeleton companies is experiencing significant growth across multiple sectors. According to Zelik, “we’ve seen an increase in the number of exoskeleton and exosuit products, and better adoption from industrial end-users — who span from Fortune 500 companies to small businesses, and include many industries like manufacturing, logistics, agriculture, and construction.”

OUTLOOK: More Exoskeletons Around The Corner

The public has a lingering perception that exoskeletons are the exclusive domain of futuristic super-soldiers and superheroes. Indeed, several countries including the United States and Russia are developing military-grade powered exoskeletons. Most exoskeletons are much simpler, however, though still able to do some pretty amazing things.

“We are still over a decade away from exoskeletons replacing wheelchairs, but this technology is rapidly advancing,” Zelik told The Debrief. A nonprofit called the American Bionics Project strives to be a catalyst for emerging exoskeleton and bionics tech to make wheelchairs obsolete in the not-too-distant future.

And experts are convinced that exosuits will become a normal part of life even sooner.

“If I walk by a construction site now, I will see workers in safety harnesses and hard hats and it makes sense that these wearables help support and protect workers. In 5 years or so, I think the same will be said for exosuits,” Zelik concluded.

Aliens and workplace injuries, watch out.