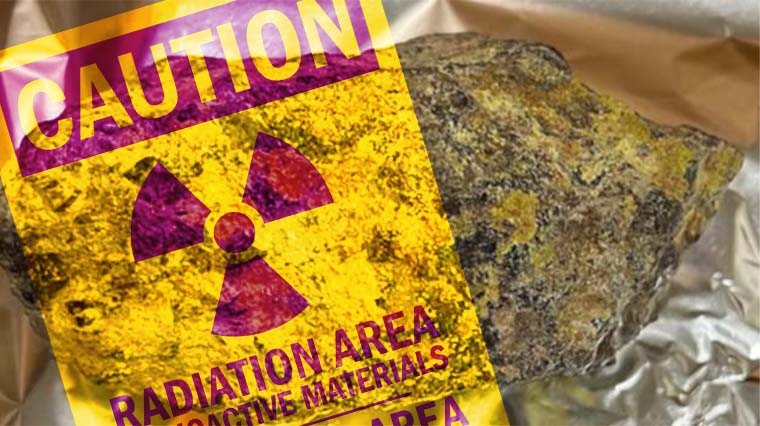 A science teacher inadvertently discovered a radioactive rock tucked away in a storage room at the Randwick Girls’ High School in Randwick, Australia.

How the potentially hazardous rock came to find a home in the inclusive girls’ high school in the heart of Sydney’s eastern suburbs remains a mystery. However, school officials say the radioactive rock did not pose any harm to students or staff.

“There should be no cause for concern or alarm from… parents,” said New South Wales Education Minister Sarah Mitchell during a budget estimate hearing on Tuesday. “We have made it clear the independent experts have come in and assessed the situation and have said very clearly that no harm was posed to staff or students, so that needs to be very clearly put on the record.”

Reportedly, the radioactive rock was accidentally discovered on August 17, after the school’s head science teacher stumbled across it while testing a Geiger counter in a storage room used by the science department.

After the alarming discovery, school administrators say the area where the rock was found was quickly cordoned off to ensure no one was at risk of possible radiation exposure.

“(She) acted very swiftly and cordoned off this location from students and staff,” Murat Dizdar, Deputy Secretary of school performance at the New South Wales Department of Education, told Daily Mail Australia. “That was the appropriate action to take because we were unsure what this material was.”

The following morning, officials from the Australian Nuclear Science and Technology Organization (ANSTO) arrived at the school to clean up the site and collect the radioactive rock. Dizdar said ANSTO scientists thoroughly searched the science department to ensure no other undiscovered radioactive materials were lurking around.

“We asked them to check every science teaching space and every science lab, where possibly (more of) such material could be,” said Dizdar.

Dizdar echoed Minister Mitchell’s sentiments, saying at no time were students ever in danger, explaining the radioactive rock was found in an area that was off-limits to students. “This is a location restricted from students, a no-go area for students. It’s a science prep room for our science teachers.”

A letter sent home by Principal Lucy Andre on August 18 told parents about the radioactive rock’s discovery, explaining, “We have been informed that the risk to staff and students is negligible.”

Officials at ANSTO did not reveal what type of radioactive minerals were present in the rock, nor has the amount of radiation detected been disclosed.

ANSTO has only said that the material contained levels of radioactivity sufficiently low enough that a person could “hold this material in your hand for about 250 hours to reach the allowable annual radiation dose set nationally by Australia’s nuclear regulator.”

While it is difficult to tell, photos provided to the press showing greenish-yellow flaking on its surface could indicate that the rock contained carnotite, a secondary potassium uranium vanadate radioactive mineral.

Notable occurrences of carnotite have been reported at the former south Australian mine site, Radium Hill.

Interestingly, this isn’t the first instance of schools being sent into a panic by the accidental discovery of radioactive rocks.

In 2016, 12 schools in Salzburg, Austria, were evacuated after 44 radioactive rocks were discovered among classroom geology collections. Anti-nuclear activist Thomas Neff, who found the radioactive material during a science presentation at one of the schools, claimed radiation levels for some rocks were 75 times the normal value.

However, a later report by the International Atomic Energy Agency disputed the idea that the radioactive rocks posed any risk to students or teachers. “Due to the storage locations and accordingly to a low local dose rate of most of the samples, an acute endangerment of pupils and teachers could be excluded,” IAEA wrote. Nevertheless, “considering the potential hazard of radiation, the rock samples were removed from the geological collections at the request of the schools.”

And while the word “radioactive” invokes images of tri-foil warning signs and nuclear bombs, when properly handled and stored, small specimens of radioactive rocks are relatively harmless.

Thanks to their unique properties, such as fluorescent hues or the ability to glow in the dark, geology enthusiasts often seek radioactive rocks as collector’s items. For $150, one can order a 5 lb box of uranium ore online from United Nuclear, a scientific supply company owned and operated by Bob Lazar – the man who claims he once secretly worked on reverse-engineered UFOs at Area-51.

ANSTO officials say the radioactive rock discovered at Randwick Girls’ High School was safely carried off in a lead box for further analysis.

It remains a mystery when, why, or how it got into the school’s storage room in the first place.