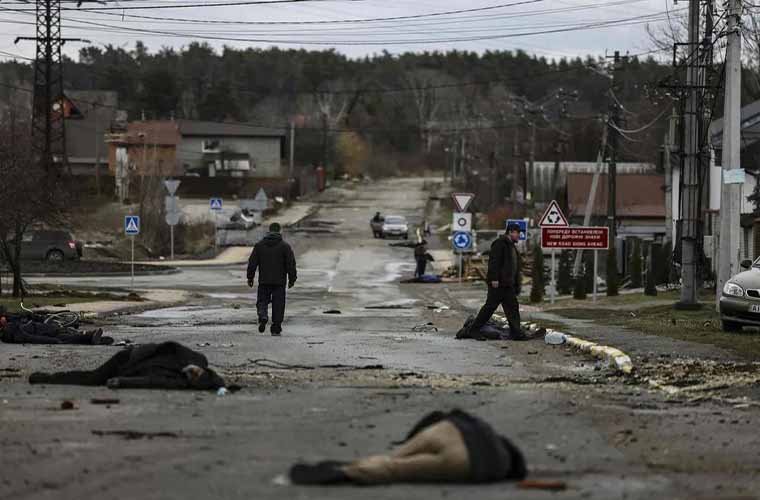 The Russian Federation put in effect a new national policy on mass burials during military conflicts a mere three weeks before launching its full-scale invasion of Ukraine.

Titled: “Urgent Burial of Corpses in Wartime and Peacetime,” the policy details the labor costs, necessary equipment, and standards for preparing mass graves for persons “killed during military conflicts or as a result of these conflicts, or, if necessary, as result of an emergency in peacetime.”

Russia’s Federal Agency for Technical Regulation and Metrology originally approved the legislation in September 2021. However, the policy didn’t take effect until February 1, 2022 – 23 days before Russian President Vladimir Putin ordered the invasion of Ukraine.

According to the document, this is the first time a policy concerning the preparation of mass graves has ever been issued by the Russian Federation.

On April 3, Ukrainian officials said the bodies of over 400 civilians had been discovered in the newly reclaimed town of Bucha, roughly 4 miles from the capital city of Kyiv.

A 45-foot long mass grave containing the bodies of at least 280 civilians was discovered behind the ​​Church of St. Andrew and Pyervozvannoho All Saints in Bucha. According to multiple international news outlets, some of the bodies found in Bucha had hands tied behind their backs with apparent gunshots to the head, suggesting the individuals had been executed.

An “informative” annex provides an in-depth example of what is necessary for the “urgent burial of 1,000 dead within 3 days.”

According to the regulation, a foundation pit 65 feet long, 10 feet wide, and 7.5 feet deep is sufficient for the burial of up to 1000 bodies. The use of a T-170 or T-130 tractor is recommended to prepare the mass burial pit.

The bottom layer of the burial pit should be covered with a mineral binder and compacted with a roller. Subsequently, in sacks, wooden or zinc coffins, corpses should be laid out in four rows within the pit. The mass grave should then be backfilled, compacted, and reinforced with mineral binders “to absorb and neutralize radioactive, hazardous chemicals and biological agents formed during the decomposition of corpses.” A ventilation channel should also be laid from the bottom to the top of the grave.

Finally, the policy recommends that a tombstone with at least 1.5 feet be erected over the burial site.

A series of eight diagrams are provided, complete with four layers of crude ovals representing 1000 bodies buried in mass.

A comprehensive mathematical formula for determining the total labor costs of performing mass burials is provided in the document. Reconnaissance of the burial site, soil structure, weather conditions, continuous work shifts, and necessary maintenance of engineering equipment are all accounted for in the calculations.

According to the policy’s authors, an ad hoc unit consisting of 16 persons and 2 units of engineering equipment can perform the “direct burial of 1000 people within 3 days.” If no engineering equipment is available, it is suggested that 250 personnel will be needed to complete the task within 72 hours.

A recommendation for how to dispose of deceased animals in “earthen pits” is also discussed in the text. The policy, however, recommends that animal corpses be destroyed under the supervision of a veterinarian in “special furnaces or incineration pits and trenches until a non-combustible inorganic residue is formed.”

According to the text, permission for the removal and reburial of persons from mass graves can only be granted by executive authorities of the “Russian Federation or local authorities in the presence of a sanitary and epidemiological conclusion.”

The vast majority of the text is specifically geared toward mass deaths resulting from military conflict. The mention of mass burials during “peacetime emergencies” appears as largely an afterthought.

In fact, the policy provides a chart for calculating the “possible irretrievable losses” of a population based on “degrees of destruction” by “modern conventional weapons.”

According to the authors, when the destruction of a city was considered “complete and severe,” through “conventional means,” there would be an “irretrievable loss” of up to 30% of unprotected, 10% of the simplest sheltered, and 5% of heavily sheltered, of a population.

A second table calculates the “possible irretrievable losses of personnel of economic facilities from modern conventional means of defeating the enemy.” According to this chart, if 55% of a city’s working population is killed, the damage will be considered “complete and irretrievable.”

It isn’t clear why policy authors included a section for calculating the expected mass deaths of a city’s population during military conflict. Particularly since formulas are centered on expected population deaths and not for damage assessment based on actual recorded deaths.

One potential reason could relate to a preceding section of the policy, which discusses that measures and stocks of materials to carry out mass burials in wartime “must be concluded in advance (in peacetime)… corresponding to the predicted losses.”

With this, policy authors are recommending that preparations for mass burials be carried out in tandem with pre-war planning for military operations.

Perhaps bolstering speculation that Russia’s first-ever policy on mass burials was linked with the planned invasion of Ukraine, the head of the Ukrainian Security Service (SBU) in the Kharkiv region, Roman Dudin, said the Russian military had purchased 45,000 body bags, a day before the invasion.

“However, I think, according to the ancient Russian tradition, they will bury them just in the middle of the field or in these nameless graves,” said Dudin.

Various sources have shared graphic images with The Debrief of piles of dead Russian soldiers left behind in regions of Ukraine recently vacated by the Russian military. These morbid scenes suggest that Dudin’s prior prediction was correct in some instances.

Given the horrific scenes of dead civilians littering the landscape or being buried in mass graves in previously Russian-occupied territories, it raises the concerning question of whom exactly was Moscow expecting to use the claimed 45,000 body bags for.

If indeed dug by the Russian military and following Russia’s new mass burial policy, the 45-foot mass grave discovered in Bucha would have been intended to bury 700 bodies.

When the new policy on mass burials came to light in late December 2021, pro-Kremlin pundits dismissed concerns that Russia’s new policy of mass burials was related to any expected future military conflicts.

What went wrong on Mars? Life is Hard Work, But Luck Helps

Russian “military expert” and close confidant of Vladimir Putin, Viktor Baranets, said the document was related to the COVID-19 pandemic.

“The law was being prepared for six months, so you know. We have not yet had forecasts of how the Russian people will die, whether it will be thousands a day or 20,000 a day,” Baranets told the Russian media outlet Novye Izvestia.

“All this requires an adequate response from the state so that they don’t whine, whine and say: ‘Here, Mishustin [Current Russian Prime Minister Mikhail Mishustin], how many people are dying, and people are lying on the roads.’ The state decided to play ahead of the curve and insure itself in case things go down a critical path.”

Russia indeed did have an average of 1,625 daily deaths from COVID-19 from June to December 2021. While undeniably high, this figure accounted for COVID deaths from across Russia’s vast territory, and there were no reports of the necessity for urgent mass burials.

Baranets explanation also fails to address the fact that most of the policy speaks specifically to mass deaths “during military conflicts or as a result of these conflicts.” Throughout the document, mass burials resulting from peacetime emergencies are mentioned “if necessary” following military conflict.

Russian journalist and military expert Alexander Golts suggested the policy was prepared with the type of catastrophic losses associated with weapons of mass destruction.

“No natural disaster can cause such a number of losses, neither an earthquake nor a volcanic eruption,” said Golts. “The one who prepared these standards thought in terms of either a global epidemic or a global war, in which not only the military but also the civilian population will die. This is only possible with the use of nuclear weapons.”

When the policy came to light in December 2021, retired Russian Army Colonel-General Leonid Ivashov agreed it was directly linked to a looming war with Ukraine.

“If we are talking about mass graves, the Russian side is actively involved in this, a war with Ukraine is being prepared,” Ivashov was quoted by Novye Izvestia. “Neither the Ukrainian people nor the Russian people certainly need this war. I do not rule out that it is Russia that initiates this war. We see the surge. We have been preparing for this war for a long time. All the talk shows of recent years are turning our population against the Ukrainians. On the Ukrainian side, the opposite is true.”

In January, the unofficial All-Russian Officers Assembly published an open letter by Ivashov demanding the resignation of Vladimir Putin and an end to his “criminal policy of provoking a war.”

Given incidents of indiscriminate shelling and numerous allegations of war crimes against the Russian military, releasing a new policy on mass burials just before launching its invasion raises some legitimate questions about the Kremlin’s true intent in Ukraine.

To date, the Kremlin has denied it is currently involved in a war or invasion of its western neighbor. Calling its activity a “special military operation” to “denazify” and “demilitarize” Ukraine. Moscow’s claims remain in stark contrast to the reality of the most significant European military conflict since World War 2, which is currently ongoing.