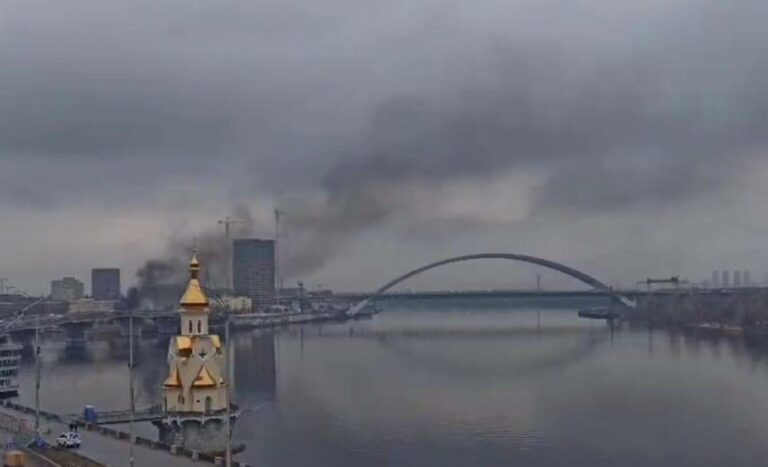 In the early morning hours, Ukrainian president Volodymyr Zelensky made an impassioned televised plea to the citizens of Russia to stop their leadership from invading his country.

“The Ukraine on your news and Ukraine in real life are two completely different countries — and the main difference is ours is real,” said Zelensky, speaking in Russian. “You are told that we are Nazis. How could a people that lost more than 8 million people in the fight against Nazism support Nazism?”

“How could I be a Nazi?” said an emotional Zelensky, Jewish, noting his grandfather had been a Soviet soldier during WW2.

At the Kremlin, Zelesky’s plea for peace fell on deaf ears.

Shortly before 6:00 am (Moscow), Russian President Vladimir Putin made a televised statement, announcing he had authorized “a special military operation” against neighboring Ukraine.

“Its goal is to protect people who have been subjected to bullying and genocide… for the last eight years. And for this, we will strive for the demilitarization and denazification of Ukraine,” said Putin, seated behind a desk at the Kremlin, flanked by the Russian flag and coat of arms.

“And to bring to court those who committed numerous bloody crimes against civilians, including against citizens of the Russian Federation,” said Putin ominously, urging members of the Ukrainian military to “immediately lay down your weapons and go home.”

Shortly after the Russian president’s address, explosions rocked multiple cities across Ukraine, including the capital city of Kyiv. Ukraine’s foreign minister, Dmytro Kuleba, confirmed on Twitter that “Putin has just launched a full-scale invasion of Ukraine.”

In addition to aerial bombardments of multiple cities, the Ukrainian State Border Service announced they were under attack from Russian ground forces to the north along the border with Belarus and in the south from Crimea. Videos shared by the border service showed Russian tanks and military vehicles moving through border checkpoints and into Ukraine.

Still a rapidly evolving situation, early indications are Russia has launched a large-scale military operation involving an air and ground invasion of Ukraine from multiple directions. The move comes as no surprise to Western defense officials, who have been warning for weeks that Russia was preparing for a massive military strike, with hopes of a possible regime change or occupation of Ukraine.

As of 11:30 am (local time), the Armed Forces of Ukraine said they had stopped Russia’s advancement in the Chernihiv region, claiming “at least 6 planes, 2 helicopters and dozens of units of enemy armored equipment were destroyed.” For their part, the Russian Defense Ministry has denied that Russia has lost any aircraft. The Debrief has not been able to independently confirm either claim.

In addition to being the largest European military action since WWII, Russia’s invasion of Ukraine represents the first major conventional war being fought in today’s information age. So far, Ukrainians seem to still have cell phones and internet service, allowing scenes of the conflict to be posted on social media in near real-time.

Another video purportedly taken outside Kharkiv shows what appears to be a burned-out Ukrainian APC and a Russian GAZ Tigr armored vehicle.

Several other videos posted online, extensive small arms fire can be heard, purportedly coming from the outskirts of Kharkiv.

Reportedly video of fighting outside of Kharkiv. Sounds like small arms fire but it is hard to tell. https://t.co/H0AUR0QIg8 pic.twitter.com/CjKTsHSrfH

Other user-submitted videos have recorded what appears to be cruise missile strikes on Ukrainian targets, including the airfield in Ivano-Frankivsk.

Reports of damage to non-military buildings and unknown numbers of civilian casualties are also being reported by social media users in Ukraine.

Civilians already suffering a heavy toll in Putin's war. This apartment block in Chuhuiv, south of Kharkiv, was hit in the opening salvos.

Number of casualties unknown at this point.pic.twitter.com/HkXgLxIBLL

The Debrief has not been able to independently verify any of the videos posted to social media thus far. The ease in which information can be shared online can likewise cause social media outlets to be rife with misinformation. One such example early into the conflict claiming to show formations of low-flying Russian planes over Kyiv, was actually an older video taken during a Moscow airshow.

Roughly 7 hours into the initial attack, Ukraine’s President Zelensky declared, “We will give weapons to anyone who wants to defend the country. Be ready to support Ukraine in the squares of our cities.” In a follow-up post on Twitter, Zelensky said, “We will lift sanctions on all citizens of Ukraine who are ready to defend our country as part of territorial defense with weapons in hands.”

With their military forces largely outmatched by Russia’s massive land, air, and sea war machine, Zelensky’s comments suggest Ukraine is hoping to be able to drag the Kremlin into a bloody street fight and costly war of attrition.

On the other hand, Russia would likely prefer not to get itself bogged down by sluggish urban warfare and hopes a rapid onslaught will be able to quickly force Ukraine into capitulating.

Posting a picture of smoke rising from Ukraine’s capital city of Kyiv, Ukrainian-based freelance journalist Olga Tokariuk said on Twitter, “Kyiv now. Russians will never be forgiven for this. The last time similar scenes were witnessed in the Ukrainian capital was during the attack of Nazi Germany in WWII.”

Kyiv now. Russians will never be forgiven for this. The last time similar scenes were witnessed in the Ukrainian capital was during the attack of Nazi Germany in WWII pic.twitter.com/g421yinG55

The Russian invasion of Ukraine is still a rapidly developing situation. The Debrief will bring updates as they come available.