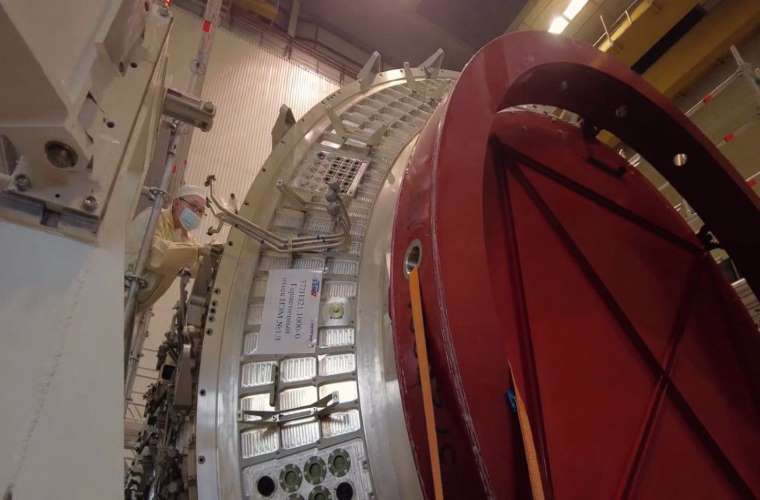 Image put out by Russian space chief of the supposed station module to be launched in 2025. (Image: Roscosmos/Rogozin/Telegram)

Russia May Leave the International Space Station to Build Its Own

On Tuesday, Russia said it hopes to launch an orbital space station in 2025. Moscow is considering withdrawing from the International Space Station, which would end a decades-long relationship with the United States and other member countries.

The announcement follows rising tensions between Russia and the United States over espionage concerns, Russia’s imprisonment of opposition leader Alexei Navalny, and the mounting conflict in Ukraine.

“The first core module of the new Russian orbital station is in the works,” Dmitry Rogozin, Roscosmos’ chief, said in a video posted to the messaging app Telegram.

Rogozin explained that this first module would be in orbit by 2025.

Russia’s Energia space corporation released a video of its staff working on the module.

While Russia has not officially pulled out of its commitment to the ISS, it has raised concerns over the aging space station launched in 1998.

A joint venture between the United States, Russia, Canada, Japan, and the European Space Agency, the ISS was a shining example of international cooperation. Russia was the key player responsible for shuttling supplies and astronauts to and from the station until SpaceX recently ended that monopoly.

“We can’t risk the lives [of our cosmonauts]. The situation that today is connected to the structure and the metal getting old, it can lead to irreversible consequences – to catastrophe. We mustn’t let that happen,” Deputy Prime Minister Yuri Borisov told Russian state TV, expressing concerns that the ISS was aging. Russia’s deal with the other countries involved in the space station expires in 2024. In 2024, the member nations will decide if the ISS will continue its mission or be abandoned out of safety concerns.

According to Interfax news agency, the estimated cost of the module currently being assembled is about $5 billion USD.

Minister Borisov told Russian state television that the new Russian station, if built, would orbit at a higher latitude to have the ability to monitor the Earth’s polar regions, which, some believe, is to help in the development of a long-desired Arctic sea trading route.

While Borisov was clear that this would be a Russian project, the Russian space agency was willing to take international partners. In March, The Debrief reported that Russia signed a deal with China to build a base on the moon.