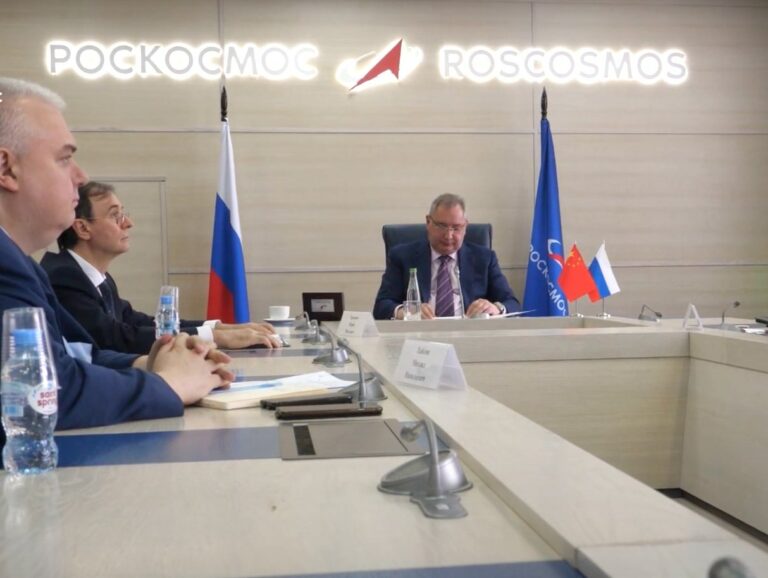 Russia and China Plan to Build a Moon Base, Russian Space Agency Says

Russia and China have announced plans to collaborate on building a moon base for future lunar research, according to a statement appearing at the website of the Russian Federation’s space program.

The Roscosmos State Corporation for Space Activities, which oversees spaceflight and cosmonaut activities as an agency of the Russian Federation, made the announcement on Tuesday.

According to the statement, the two countries endeavor to work together, “guided by the principles of parity distribution of rights and obligations,” and will “promote cooperation in the creation of an open access missile system…aiming to strengthen research cooperation and promote the exploration and use of outer space for peaceful purposes for the interests of all mankind.”

The plan outlines construction of what the Russian space agency has dubbed the “International Scientific Lunar Station,” an experimental research facility which will either orbit, or actually exist on the surface of the Moon. The aim of the moon base will be “to carry out multidisciplinary and multipurpose research work, including the exploration and use of the Moon, lunar observations, fundamental research experiments and technology verification with the possibility of long-term unmanned operation with the prospect of a human presence on the moon,” the Roscosmos statement reads.

The timing of the statement appears to coincide with the birthday of cosmonaut Yuri Gagarin, whose 108-minutes in orbit around the Earth marked the first human spaceflight. Gagarin was born on March 9, 1934.

Roscosmos says that Russia and China have maintained a tradition of cooperation with their spacefaring aspirations. “To date, within the framework of interaction in the field of lunar and deep space exploration,” the Russian agency said, “an Agreement has been signed and is being successfully implemented between the Roscosmos State Corporation and the Chinese National Space Administration,” which in addition to the proposed lunar research facility will be aimed at cooperation between the two agencies with relevance to Russia’s Luna-Resurs-1 orbital spacecraft, as well as China’s Chang’e-7 lunar mission.

It was reported late last year that Russia had been hesitant to commit to future involvement with the United States on future operations, specifically NASA’s project Gateway, a proposed orbital lunar base which will aim to lay the groundwork for future long-term human activities on the Moon, “as well as a staging point for deep space exploration.” Gateway is described by NASA as “a critical component of NASA’s Artemis program.”

Last October during a panel at the International Astronautical Congress, director general of Roscosmos Dmitry Rogozin said that he doubted Russia would play a significant role with the Gateway project, despite commitments from other international partners which included Japan, Europe and Canada, saying that the lunar Gateway “in its current form is too U.S.-centric.”

“Russia is likely to refrain from participating in it on a large scale,” Rogozin said at the time.

Russia and China say they also plan to create “a joint data center for the exploration of the Moon and deep space,” which, despite their choice in operating apart from NASA’s Gateway program, the countries state will be open to “all interested countries and international partners.”

Make sure to follow us on Flipboard for exclusive content and the latest news on breakthrough science and disruptive technology!