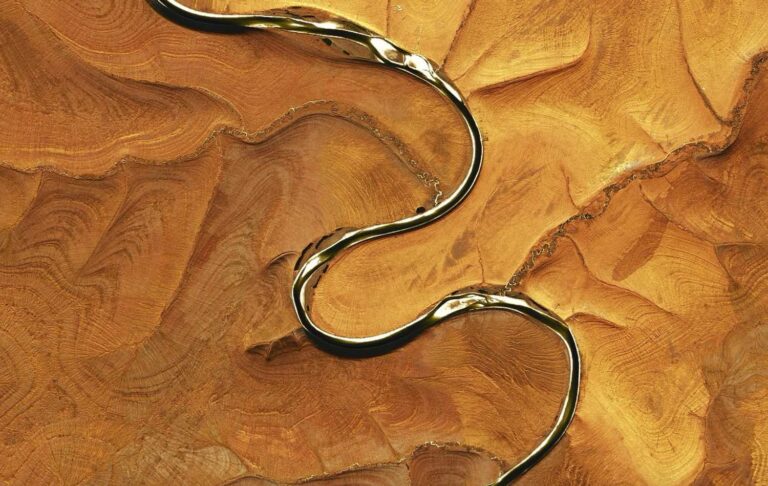 The Vilyuy Plateau of Arctic Siberia is one of the most extreme locations on Earth. Temperatures here at various times throughout the year would redefine what most would identify as cold, representing what are among the most severe winter conditions anywhere in the Northern Hemisphere.

This region of the Central Siberian Plateau, also sight of a mysterious blast that originated from the sky in 1908, is also the source of the Russia’s Markha River, which in recent days has been identified as the source of an all-new geological riddle.

Background: Lines in the Sand

The mystery first came to light with the appearance of new images posted by NASA researchers at the Earth Observatory website. The images detailed a series of odd looking striped areas along either side of the Markha, which appear throughout the series of photographs spanning the last several years, remaining visible in every season.

Researchers note that the strange striped features become most apparent in the winter months, when frost and snow coverage enhance contrast between the light and dark areas represented by these unique stripes.

The photos containing these curious striped areas were obtained from the Landsat 8 satellite, which orbits Earth in a near-polar orbit that allows it to complete a full revolution around the Earth in a little more than an hour and a half.

Analysis: Studying Earth From Above with Landsat 8 Satellite

More specifically, The Operational Land Imager (OLI), deployed aboard the Landsat 8, is what managed to capture the images of the Markha’s unusual stripes. Designed by Ball Aerospace & Technologies Corporation, the OLI measures portions of the spectrum in the near infrared, as well as short-wave infrared. Although the Landsat 8 satellite is able to produce 740 scenes every 24 hours, covering a maximum area of a little more than 112 square miles, the images obtained by the OLI, according to NASA, have 15-meter panchromatic (i.e. sensitivity to all colors in the spectrum) and 30-meter multi-spectral spacial resolutions which are capable of covering areas about 115 miles wide. From its near-polar orbit, Landsat 8 manages to capture images of the entire planet every 16 days.

According to a spacecraft instrument fact sheet at NASA’s Landsat 8 web page, “The OLI uses long detector arrays, with over 7,000 detectors per spectral band, aligned across its focal plane to view across the swath.” This design, which on account of the shape of its coverage area is described as “push-broom,” is able to provide acutely sensitive data about land surfaces, but with greater reliability and overall performance enhancement. It is no surprise that the peculiar geological features along Russia’s Markha River would be detected so clearly considering the Landsat 8’s capabilities.

As far as what causes the appearance of these unusual features, some have suggested that the cold conditions on the Central Siberian Plateau could be a key factor, not only in their visibility at various times of the year, but also in terms of their formation. Regions that undergo periodic freezing and thawing can take on a striped or layered appearance over time, as sediment layers containing various kinds of soil or stony debris gradually stratify into layers of similar composition.

The Antikythera Mechanism Still Challenges Our Ideas About the Past


This ancient computer and other anachronisms from early times leave us with more questions than answers.

According to NASA, soils in cold regions like the Central Siberian Plateau can also become what are known as Gelisols. “As the ground freezes and thaws, the layers break up and mix vertically in a process called cryoturbation,” as Andi Brinn Thomas explains. “The persistent freezing and thawing action through the seasons can cause layers to align in a striping pattern.” Thomas notes, however, that large-scale evidence of such formations is not currently known to exist.

Another possibility is that what geologists call “layer cake” geology could be a contributing factor, in which erosion over time can reveal unique sediment layers possessing a variety of different colors and textures. Arguably, the most famous and striking example of this occurs in the landscape of China’s Zhangye National Geopark, where the stratigraphic layers of its mountains possess an almost rainbow-like appearance.

Although they are less eye-grabbing than China’s rainbow mountains, similar geological process are likely at work behind the appearance of the Markha River’s stripes, and with the aid of technologies like those deployed with the Landsat 8, we are able to spot and identify such natural curiosities, even in regions as remote and demanding as Arctic Siberia.