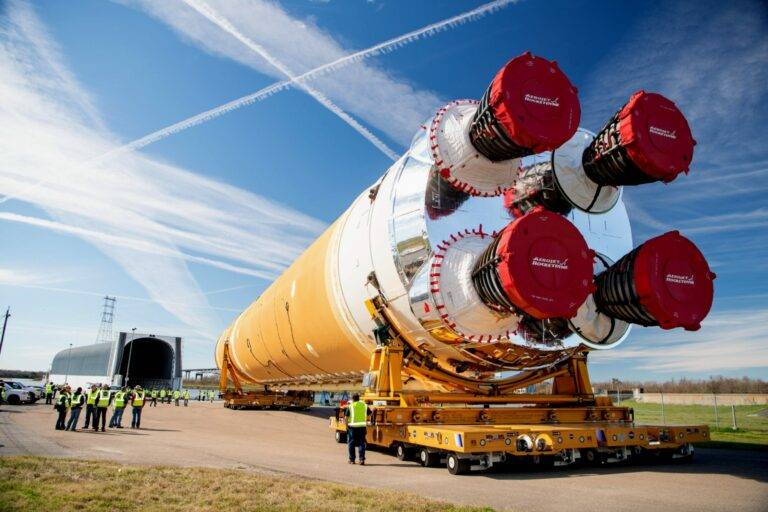 NASA Reached New Heights in 2020, While Aiding the Fight Against COVID-19

In a year where the coronavirus pandemic has slowed the ambitions of many of the world’s leading industries and scientific institutions, NASA has beaten the odds by maintaining ambitious goals, even while aiding in the fight against COVID-19.

NASA has maintained a demanding schedule throughout the last twelve months. Among the many projects the space agency has in the works is America’s Moon to Mars exploration strategy, a part of NASA’s Exploration Campaign, which encompasses the agency’s efforts to place the United States at the forefront of low-Earth orbit operations, as well as regaining a dominant presence in lunar exploration. Such ambitions aim to carry Americans further out as well, eventually bringing humans to Mars.

NASA’s 2020 ambitions have roots in the winter of 2017, following President Donald Trump’s signing of Space Policy Directive-1, which set the pace for many of the agency’s current programs. Earlier that year in March, the Trump administration also signed the NASA Transition Authorization Act of 2017, which authorized “the development and execution of a long-range plan for deep space human exploration; invests in robust science, technology and aeronautics portfolios; and endorses the Agency’s successful efforts to nurture a new commercial market that will boost our economy and create more jobs,” according to a Whitehouse.gov statement. “Additionally, it guarantees vastly improved health care for the heroes who risk their lives in the exploration of space.”

With these ambitions on the table—many of them having been in the works for years, if not decades—few could have foreseen that the emergence of a novel coronavirus would threaten not just America’s long-term space objectives, but also every aspect of its life and economy.

Despite the setbacks it faced, NASA both maintained its cooperation with commercial partners SpaceX and returned Americans to frequent spaceflight, while also engaging in direct efforts in the fight against COVID-19.

While the pandemic began to gain foothold in the United States back in March, a team of engineers based at NASA’s Jet Propulsion Laboratory (JPL) put aside their work with rockets and spaceflight, and began to look at novel and highly efficient ways of building devices meant for use here on Earth: namely, the badly-needed ventilators that hospitals in California and elsewhere around the country had in increasingly short supply.

The JPL team’s main challenge involved crafting a ventilator that was both inexpensive to build, but also functioned differently from traditional models. That way, the parts required would be different from those used in conventional ventilators, demands for which were already unable to be met.

The result of this effort was the Ventilator Intervention Technology Accessible Locally, or VITAL, a ventilator design which met the Food and Drug Administration’s requirements for Emergency Use Authorization. The JPL team managed to design the VITAL system from scratch in just 37 days, and able to last for up to four months of use. Licenses for the VITAL systems were subsequently offered freely to manufacturers through Caltech’s Office of Technology Transfer and Corporate Partnerships, of which there were already 100 applicants within weeks of the license program being authorized.

In addition to JPL’s VITAL ventilators, NASA also helped produce new technologies in response to the pandemic that included an oxygen helmet for use in treating COVID-19 patients, as well as a new surface decontamination system.

“NASA has impressed the nation with our resilience and persistence during the pandemic,” NASA Administrator Jim Bridenstine recently said in a statement posted at NASA’s website.

“We made history with a U.S. commercial partner, made groundbreaking discoveries, advanced science, furthered aeronautics research and technology development, and even joined in the fight against COVID-19. We met an incredibly challenging year with incredible achievements and established a path for continued success.”

Among NASA’s 2020 achievements had been the first launch of astronauts from American soil to the International Space Station (ISS) in almost a decade, and aboard a commercially built American spacecraft designed by SpaceX. The landmark achievements marked two decades of continuous presence by the United States aboard the ISS.

The SpaceX Crew aboard the Dragon spacecraft, comprised of astronauts Michael Hopkins, Victor Glover, Shannon Walker and Soichi Noguchi, approach the International Space Station for docking (Credit: NASA).In addition to returning space flight to the ISS from U.S. launch sites, NASA also managed to expand on its future plans to employ robotic probes, and eventually human visits to the Moon. In a program it calls the “twin sister of Apollo,” the aptly named Artemis program plans to land the first woman on the moon, as well as the next male astronaut to reach the lunar surface, by 2024. The program will use “innovative technologies to explore more of the lunar surface than ever before,” according to a NASA page that details the program’s objectives.

“We will collaborate with our commercial and international partners and establish sustainable exploration by the end of the decade” the statement says, with the goal of using data obtained from lunar exploration of the immediate future in the furtherance of NASA’s aims to carry humans on to the Red Planet.

Also in 2020, NASA launched its Mars 2020 Perseverance rover mission in July, which since that time has crossed the halfway point toward its destination. The most sophisticated rover ever sent to the Red Planet, Perseverance departed from Cape Canaveral Air Force Station from Space Launch Complex 41 at Cape Canaveral on board an Atlas V rocket.

“With the launch of Perseverance, we begin another historic mission of exploration,” Bridenstine said following July’s launch. “This amazing explorer’s journey has already required the very best from all of us to get it to launch through these challenging times.”

In addition to NASA’s in-house and commercial achievements in 2020, the agency also expanded its efforts toward working with international partners. Namely, the introduction of the Artemis Accords, signed by NASA and eight other partner countries, saw the implementation of an Outer Space Treaty and other agreements designed to establish the governing principles for the future of space flight in harmony with all nations of the world.

“The purpose of these Accords is to establish a common vision via a practical set of principles, guidelines, and best practices to enhance the governance of the civil exploration and use of outer space with the intention of advancing the Artemis Program,” reads a portion from Section 1 of the document, which was posted at NASA’s website.

“Adherence to a practical set of principles, guidelines, and best practices in carrying out activities in outer space is intended to increase the safety of operations, reduce uncertainty, and promote the sustainable and beneficial use of space for all humankind,” the document reads.

“The Accords represent a political commitment to the principles described herein, many of which provide for operational implementation of important obligations contained in the Outer Space Treaty and other instruments.”

“By committing to the principles of the Artemis Accords, NASA and its partners help ensure humanity can enjoy a peaceful and prosperous future in space,” a December 21 press release by NASA stated.

NASA’s most recent press statement detailing its 2020 achievements, as well as its future goals, can be read online at the agency’s website. Additional details about NASA’s current and future missions, research, and discoveries can also be found online at nasa.gov.