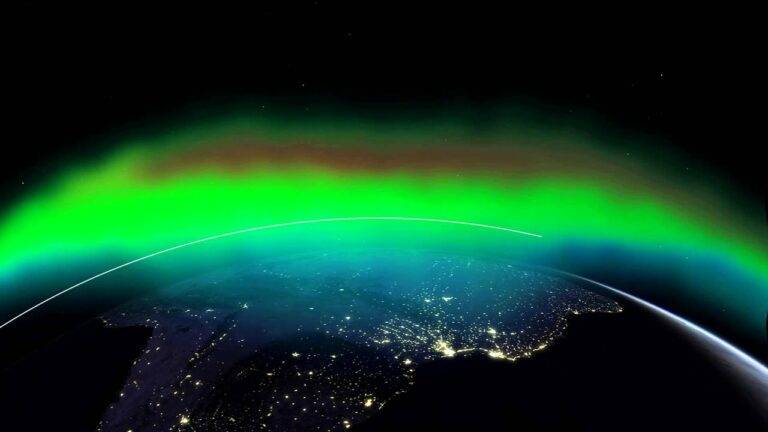 One of Earth’s most well-known mysteries, the Bermuda Triangle, apparently has a cosmic counterpart. The South Atlantic Anomaly, a distortion in Earth’s magnetic field, has perplexed space explorers for decades. Satellites experience malfunctions as they transit this area, and astronauts have reported seeing strange lights as their craft pass through the zone.

BACKGROUND: What is the South Atlantic Anomaly?

Earth’s magnetic field is generated by the enormous, swirling, and infernally hot iron core of the planet. The fundamental issue underlying the South Atlantic Anomaly is that the generation of this magnetic field is not symmetrical. The magnetic poles emanating from the core of the planet do not line up with its actual northern and southern poles, creating the conditions for distortion.

As the iron core of the planet churns and the Earth’s magnetic field forms, energetic particles from the sun become trapped in it. This phenomenon forms the Van Allen belts, highly radioactive areas surrounding the planet. The South Atlantic Anomaly occurs where the Van Allen Belt dips closest to Earth.

The magnetic anomaly dips as close to 200 miles to the planet’s surface, well into low Earth orbit, and is located between South America and Africa—south of the infamous Bermuda Triangle, with its storied history of purported disappearances of ships and planes.

When humans and our technology pass through the anomaly and interact with the Van Allen belts, which Space Center Houston describes as “two donuts of seething radiation,” the results can be similarly strange. Apart from the dangerous radiation levels, satellites experience malfunctions and astronauts have reported seeing flashing lights; communication systems experience issues, and other equipment malfunctions.

NASA and other scientific organizations state that this anomaly currently poses zero risk to life on Earth.

Several studies have been conducted within the anomalous area. One of these indicates that the phenomenon may have even been around for millions of years.

While there isn’t a definitive answer on how this anomaly may change in the future, its existence as is can prove problematic. In space, astronauts and technologies passing through it are exposed to more Van Allen belt radiation; and on Earth, ScienceAlert suggests it could weaken our natural defense against cosmic radiation. As if the events of 2020 haven’t worried humanity enough, we can apparently add space radiation to any apocalyptic bingo card.

The effects of the South Atlantic Anomaly remain another weird mystery of space, presenting a potential obstacle to satellite technologies and uninterrupted space communication, and generating some strange reports from those few humans passing through it. If the anomaly were to grow and deepen its area of influence, it could be a science fiction disaster movie waiting to happen. But back in reality, further study of the South Atlantic Anomaly and its effects will help humanity navigate space more safely and effectively in the future.