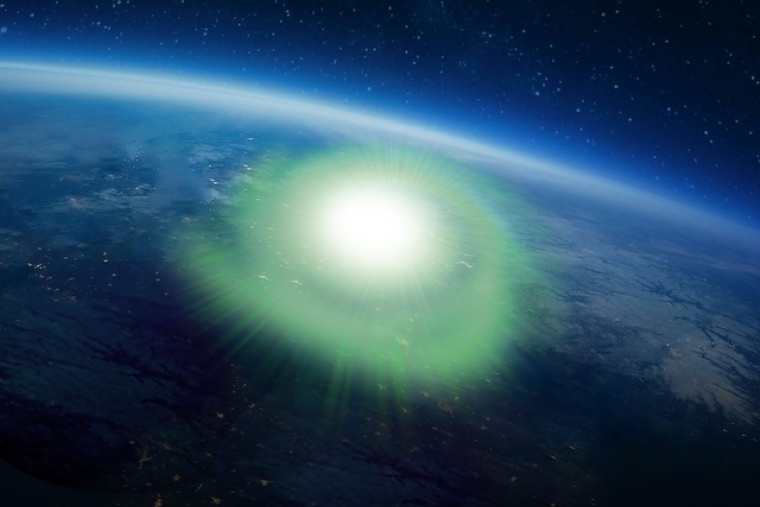 Hurricanes represent one of nature’s most awesome and potentially devastating climatic events. These tropical storms, whose quick rotations produce a lower-pressure central “eye” surrounded by spiraling wind and thunderstorms, can produce heavy rain and winds strong enough to cause a wide variety of damage once they make landfall.

Now, scientists have confirmed the existence of a similar phenomenon that occurs in space, and which instead of water and wind produces showers of excited electrons.

A new study in the journal Nature Communications details research by an international group of scientists, whose observations of hurricane-like formations of swirling plasma above the North Pole confirms the existence of what they call “space hurricanes.”

Such formations, observed swirling within the polar ionosphere and magnetosphere, are believed to occur coinciding with varying degrees of solar activity and, according to researchers who conducted the study, “otherwise low geomagnetic activity.”

While the occurrence of space hurricanes was only recently confirmed, observational data obtained from satellites was actually first obtained as far back as 2014.

The dazzling display of charged particles spinning in Earth’s upper atmosphere was first spotted by satellites, and lasted close to eight hours before dissipating. The research team who disclosed the discovery believe that these space hurricanes are likely to cause widespread magnetic disturbances that may affect GPS, communications systems, and other similar technologies around the world when they occur.

Close to the center of the swirling formation, the shower of electrons it produced were excited to faster than normal speeds of around 10 kiloelectronvolts (or keV). Although climatic conditions were actually quite stable at the time of the space hurricane, the researchers note that the size of the plasma formation and its accompany energetic momentum were impressive.

According to the Nature study, the hurricane is believed to originate from what is called high-latitude lobe magnetic reconnection, a long studied phenomenon which remains mysterious to scientists. This involves plasma processes that are capable of converting Earth’s magnetic energy into particle energy, which is believed to occur coinciding with changes in magnetic field lines. The result is the appearance of plasma phenomena in space, and magnetic reconnection has been strongly linked to a variety of explosive phenomena that include geomagnetic storms and other phenomena occurring in Earth’s magnetosphere.

Much the same with space hurricanes, these phenomena occur coinciding with such magnetic reconnection events, according to the Nature study’s authors.

Online Witchcraft Is Popular as Hell, and It Isn’t Going Away


As science and technology continue to remain the key driving forces of the 21st Century, witchcraft is still out there and its popular as hell...

“The space hurricane opens a rapid energy transfer channel from space to the ionosphere and thermosphere,” the study states, which the researchers believe would lead to widespread space weather effects capable of inducing increased satellite drag and navigational issues, as well as radio communications and radar systems disturbance.

However, the researchers add that this phenomenon is probably not specific to our planet, and in fact may be a phenomenon which occurs on most planets and other magnetically active areas throughout the universe.

“The space hurricane is likely a universal phenomenon,” the study concludes, adding that “The process may also be important for the interaction between interstellar winds and other solar systems throughout the universe.”

The study, titled “A space hurricane over the Earth’s polar ionosphere,” was published in Nature Communications by lead author Qing-He Zhang, et al, and can be read online.