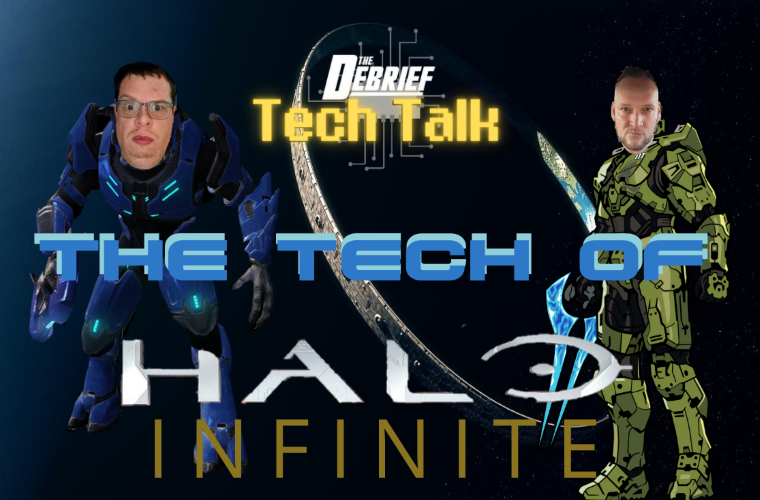 In the latest edition of The Debrief’s Tech Talk, resident techno-nerds Mr. Stefan Gearhart (aka the camp counselor, because he was actually a camp counselor, because who would lie about that), and his trusted fellow host Dr. Josh Rutledge (who claims he would be the “leader of cheer” at any summer camp he worked, and who is also not a doctor) take a closer look at the Halo Infinite Campaign.

Along with a number of mistakes they had to fix after the pod’s initial recording, and their usual affable nature that makes those mistakes more charming than challenging, the semi-dynamic duo did their best to look at the tech of the game itself, including the move from discs and cartridges in the early years of X-Box Halo games to the streaming options currently available.

(Spoiler alert: The guys didn’t love the switch at first, but now can’t believe they were ever resistant to streaming. Oddly, this is a set of qualities shared by my 80-plus-year-old parents)

“I want my disc,” exclaimed Gearhart of his initial reaction to cloud gaming, before stating that, “I now buy every game digitally.”

As far as game improvements, Messieurs Rutledge and Gearhart highlight the evolution of the game controllers, the move from X-Box exclusivity to multiple platforms, and the aforementioned benefits of storing your games in the cloud for later retrieval. The competent-yet-kooky cyber chums also look at the various upgrades the Halo series has undergone over the years, with a great series of comparisons between images from early games and the upgraded images of those games years later. It is really impressive, and a must-view part of the show.

In their next segment, Mr. Stefan and Professor Rutledge (who is also not a professor), highlight some of the technology featured within the world of Halo, which they note takes place about 500 years in the future. (The guys do give a figure of the exact year during the show, but seriously, they had to change like four facts in editing, so I am not committing to anything beyond the 26th century.)

The main focus is on some of the fictional military vehicles in the different iterations of the game, including something called the Warthog that Josh describes as “this crazy, four-wheel drive, like four-wheel steer, Jeep type thing.”

“I hated it,” said Gearhart, interrupting his beneficent pod partner.

“It was impossible to drive,” added a more-level headed Rutledge, as the graphics on the screen show the clunky nature of the game’s cursor-based steering.

“I hated it!” Gearhart shouted loudly again as if no one heard him screaming the first time. “Anytime we would play a two-player story mode, I’m like ‘I’ll sit in the back, and I’ll shoot things.’”

(According to some of the attendees at Mr. Rutledge’s wedding, he said the exact same thing to his wife before they drove away in the honeymoon car.)

The loony, loveable scare-heads (because they host the Fearscape Paranormal Podcast, alright?) then talked about the bionics used by some of the characters in the game, before highlighting some really cool advancements made in the bionics and brain-machine interface fields in recent years. They also note how Luke Skywalker’s bionic arm in the 1980 sci-fI Classic The Empire Strikes Back influenced the real-world science of bionic limb replacement, seemingly ignoring the legendary work of former astronaut Steve Austin and former tennis professional Jamie Summers in the 1970s, not to mention the contributions of Dr. Rudy Wells and senior OSI administrator Oscar Goldman.

This interchange about bionics also leads to a headier, more esoteric philosophical discussion about the idea of voluntarily swapping one’s functional human limbs for cybernetic ones, an exchange that highlights the sometimes contrasting approaches to life by The Debrief’s two Tech Talk pod pals. For instance, was the movie Terminator actually a warning message sent by a time-traveling movie maker from the future, asks Rutledge. You have to listen to really see what I mean and to hear Stefan’s response.

Next, the guys highlight some real-life aerial vehicles currently being built that share some similarities to the more futuristic vehicles in the Halo series, including a pair of manned drones called the Jetsons 1 and the Zevo Zero respectively. The Debrief recently reported on the latter, a flying-saucer-shaped, manned electric VTOL, and based on Stefan’s description of how it will fly once it is available for purchase, he didn’t read the story. (But the video is cool, so there’s that.)

Josh and Stefan close their review of Halo Infinite with their WARP scale rating of the game and then finish the show with a review of the social media app The Pattern. It’s a real trip, but you will have to hear their description of the app and its insanely unique functions to see how interesting it really is.

All in all, this third episode is definitely the guys’ best Tech Talk yet, so I give it a WARP factor of five out of five. Well done, fellas. And I’ll be looking forward to a review of the Star Wars Occulus VR game you teased during this show.

May the force be with you.