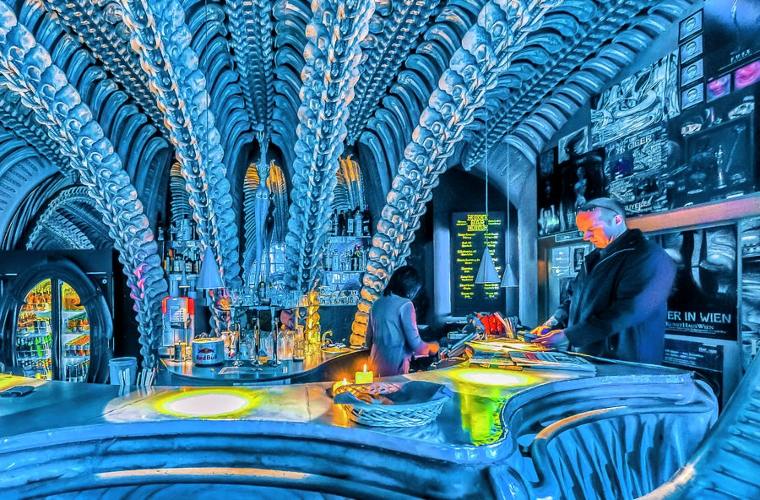 
The Debrief dives into the finest drinking establishments this side of Luna to meet your geeky party needs.

When it comes to locations that the average punter can get a drink, it would be hard to throw a stone and not hit a drinking establishment in most of the world. It’s easy enough to find a sports bar, a “Wild West” themed bar, and just about any era has a bar styled up to match somewhere. Sadly, the same cannot be said for clientele who desire a drink surrounded by robots, phasers, and their favorite sci-fi memorabilia. Science fiction themed bars are few and far between, though thankfully not light-years apart.

Are there Sci-Fi Bars in the USA?

There have been many valiant attempts over the years. Sadly, such endeavors have been doomed to failure within the USA over the last decade, with Covid-19 putting the final nail in the coffin for a few.

Among the notable names include; Mars 2112 in New York City, which closed in 2012 due to financial problems, The Encounter at LA Airport that closed in 2013, and The Lovecraft Bar that was sold and rebranded in 2020 amid a scandal regarding its former owner.

However, the good news is that while they are thin on the ground in the USA, it’s possible to find more worldwide if you know where to look. Here are five notable offerings where you can

Do you feel like putting your Battlestar into some action? The Debrief has you covered with our list of the top science fiction-themed bars to get your “Kirk game” on. Set your phaser to stun (or kill…you naughty nerd) and hit up one of these great establishments.

One of the few exceptions to the downtrend in Sci-Fi bars in the USA, The Scum & Villany Cantina in Hollywood declares itself a drinking establishment for sci-fi and fantasy movie fans. Initially inspired by Star Wars, the Cantina caters to anyone with a love of the genre.

It was initially intended to be a temporary pop-up bar in 2017, with ticketed entry, that would only last a few months. However, the bar proved popular, and its coming demise was so lamented that the bar owners decided to drop the ticketed entry and make it a permanent haven for all ‘geeks.’

It operates a strict no-bullying policy, and disagreements between the Star Wars and Star Trek communities are likely to find a costumed bartender joining in the debate while mixing cocktails. It is a safe space for mega fans and the casually interested alike.

If you prefer your watering holes to be a tad more threatening, we’ve got just the place for you. The HR Giger Museum Bar is, quite frankly, terrifying.

Swiss artist H. R. Giger created the bar. It is a love note to the acclaimed biomechanical environment and creature design from the film Alien. If you are liable to recall watching Alien, or its sequels, from behind a blanket, the bar will give you the jitters, with its spine-like constructions and molded alien-esque seats.

Thankfully, the bartenders are human, there isn’t an egg in sight, and the drinks are unlikely to result in any chest-bursters.

Tucked away in a cozy space near Kanda Station in the heart of Tokyo, Kanda Flux is a homage to all things Sci-Fi. The walls are lined with memorabilia, while near life-size robots and more recent pop-culture films find a home here.

Star Wars plays a prominent part of the display, but replicas from other films, such as Ghostbusters and Back to the Future, are also nestled into the bar, which looks more like a toy shop than a bar at times.

Although opened with sci-fi enthusiasts in mind, the bar has never lost sight of its true purpose and features an impressive away of food and drink options. If you want to find out what a Sith is made from or how the Dark side tastes, this is the place for you.

Just remember not to bash your head on the “Welcome to the Future” sign on your way past.

The Joben Bistro is a steampunk-inspired pub in Cluj, Romania. It is a fantastic three-room homage to the great Jules Verne, author of Twenty Thousand Leagues Under the Sea and Journey to the Centre of the Earth.

The pub’s interior has been put together with care, creating a space filled with steampunk styling, from the lights, the décor, and the curated objects within. The pub is divided into three areas, each with its own flavor.

The first room acts as an art gallery, while the main bar resides within the second room, which it shares with quirky installations. The final room is an ensemble of steampunk objects that will make the keenest hands-on fan of the scene start planning their own recreations.

Returning to the USA, the Jupiter Disco in Brooklyn is a bunker-like space given a dystopian sci-fi make-over. No specific film is represented here, although a blueprint to the Mos Eisley cantina can be found on one wall.

The space is bathed in orange lighting, deliberately not penetrating deep into the dark recesses of the booths. Local DJs are on deck, mixing progressive disco, synth, and electronic music.

As with any dystopian bar, the space inside is dark and comfortable for regular visitors, while the outside world is ignored and its threats are forgotten.

The drinks here feature names drawn from a wide range of influences, the coolest sounding of which is the Europa Report, a name that you’ll see coolly scrolling past among the list of drinks displayed on TV screens. Forget looking for a paper menu. You won’t find one.

Sometimes themed bars suck so severely that they doom themselves to failure before they ever open. Others are created with love, resulting in a palpable atmosphere of genuine interest in the scene. When that happens, surprise hits can last for decades, and fans keep coming back, enjoying the ambiance and the safe space to chat about their favorite science fiction movies. Make sure you take that stillsuit off, holster your blaster, and grab a nice cold one to salute the future world you now inhabit (at least temporarily).

Between rock climbing, sky diving, and saving up for a ticket to space, Matt Staples loves to write. Okay, he doesn’t do any of those other things, but he does love to write.  His favorite topics are anti-heroes, dystopias, crazy sci-fi, and researching side hustles for his entrepreneurial blog.