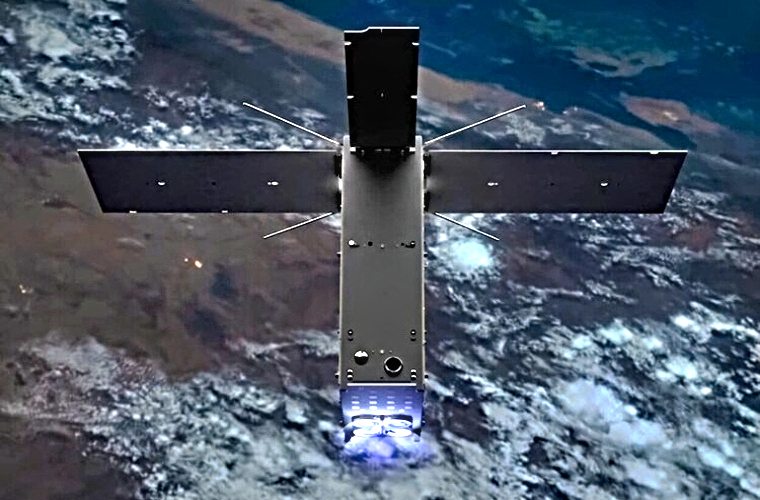 Although space is incredibly vast, critical portions of Earth’s orbit are becoming dangerously crowded. Commonly referred to as “space junk,” thousands of pieces of dead satellites, rocket boosters, and other artificial debris are making it increasingly dangerous to navigate this narrow band of satellite-friendly space and endangering future launches.

Hoping to help address this growing issue, along with a host of others, South Africa based Hypernova Space Technologies has zeroed in on a novel type of electrical propulsion known as plasma propulsion, which they claim can not only offer significant maneuverability to smaller satellites (those less than 10 Kg) but can use the metal from dead satellites and other space junk as fuel for their electric propulsion engine.

Furthermore, says Hypernova, their breakthrough engine can even use natural space objects like the iron from asteroids and other space bodies to replenish their engine’s fuel on the spot.

“Hypernova’s breakthrough technology uses resources that are found in abundance throughout our solar system as fuel,” the company’s website states. “We are the world’s only commercial electric propulsion designed for in-situ resource utilization.” As such, the company’s website adds, “Hypernova’s thrusters will use fuel found on Earth today, the Moon tomorrow, and asteroids within our lifetime.”

Since Sputnik, the first artificial satellite, launched in 1957, engineers have searched for newer, better ways to power satellites once they are in orbit. Solar panels and batteries have traditionally offered the needed juice for most electrical systems, but other than a few technology demonstrators on future concepts like Ion drives and solar sails, chemical propellants are still the go-to method for in-space mobility. As such, most satellites don’t even possess the ability to maneuver, much less change orbit, making a technology like the one being championed by Hypernova even more critical for versatility and safety.

These present-day shortcomings led the company’s founder Johnathan Lun to see if a method of electrical propulsion that uses metal as fuel could be adapted to smaller satellites, offering operators the ability to change a satellite’s position and altitude at will.

“Most satellites are simply computers that are tossed out the side of a rocket [that] are tumbling in space,” says Jonathan Lun in a recent interview with Yahoo.

That revelation, he says, hit him around a decade ago when he learned about a thruster technology first researched by NASA but never brought to completion, known as a plasma thruster. It involved using an electrical reaction to vaporize solid metal fuel, creating a jet of fast-moving plasma that he believes can offer the capability of maneuvering these smaller satellites for repositioning, maintaining their current position, or even being moved to avoid oncoming space junk.

Analysis: The Best Way to Kill a Zombie Satellite is to Eat It

In the years since his initial inspiration, Lun and his Hypernova team have run a range of tests on their own version of the plasma drive system.

These included testing the thruster in a vacuum to simulate the environment of space, across an extreme range of temperatures like those found in Earth orbit and under heavy vibrations like those experienced during launch. These successful tests ultimately culminated with the company entering and winning the 2017 LuxIMPULSE Award at the government of Luxembourg’s Space Exploration Masters competition.

“Picking a winner out of the 49 proposals was certainly a challenge for all of us,” said Marc Serres, the Director of Space Affairs for the Luxembourg government. “In the end, Hypernova’s advanced prototype of a plasma thruster struck a chord because it is a technology with a proven track record that neatly fits into Luxembourg’s dynamic space ecosystem, including our new SpaceResources.lu initiative. We are looking forward to supporting Hypernova’s bid to become the first commercial producer of electric propulsion engines using solid metal as propellant.”

According to the company, using solid metal as fuel has several advantages.

First, it is safer. By using a non-toxic, non-pressurized, non-liquid propellant, there is little risk of explosion during pre-launch. The second reason is the ability to load this solid-state propellant during the construction phase rather than waiting until the last minute, as is currently done with highly combustible liquid fuels.

Of course, the most tantalizing component of Hypernova’s electric plasma thruster is the potential for using space junk (or the metal from asteroids) to refuel the engine on-site, offering expensive-to-launch satellites a significantly longer lifespan, and at least a partial solution to the growing space junk problem.

“Hypernova’s thrusters will use fuel found on Earth today, the Moon tomorrow, and asteroids within our lifetime,” their website states.

The company also notes that such systems will offer their customers’ satellites maneuverability, which is becoming increasingly important in the crowded regions of Low Earth Orbit, where satellites as small as 10cm (called CubeSats) are expected to be launched by the tens of thousands in the coming decades.

“Hypernova’s line of plasma thrusters are suited for CubeSat missions and beyond,” the website explains. “We’ll help you with station-keeping, constellation phasing, collision avoidance, and other critical in-orbit manoeuvres.”

Outlook: Space Junk Can Be A Giant Buffet

Although the company’s metal-based plasma propulsion system has yet to be put to the real test in space, Bulgaria-based EnduroSat is currently scheduled to launch a satellite equipped with the Hypernova plasma drive in early 2022, offering the company its first opportunity to see how their system performs in the actual environment of space. If successful, Lun believes the idea of using metal fuel scavenged from zombie satellites may shake things up in the greater spacecraft navigation community.

“If we can now switch over from rare, expensive liquids and gases as fuel sources, to move stuff around in space with cheap and abandoned iron ore or other metals,” said Lun, “it changes the game completely.”