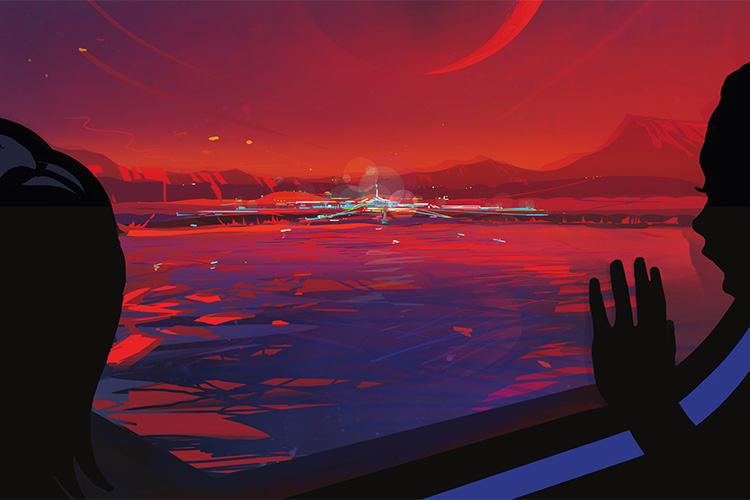 University of Montreal (UdeM) researchers have found the first confirmed exoplanets categorized as water worlds. Dubbed Kepler-138c and Kepler-138d, the two ‘super-Earths’ are essentially identical twins, with both about 1.9 times the size of the Earth. Astronomers had previously found an exoplanet they thought may be a water world, but that find still needs to be confirmed by the James Webb Space Telescope (JWST) sometime next year.

Researchers tell The Debrief that more work is needed to fully understand the composition of Kepler-128c and Kepler-138d, and both exoplanets may only contain water vapor and no surface water. However, given that water is the fundamental building block for all life as we know it, the exciting first-ever confirmation of two exoplanet water worlds still dramatically increases the likelihood that alien life exists in the universe.

Before 1995, astronomers and cosmologists were not sure that planets besides the eight in our solar system (sorry, Pluto) even existed. Since the first discovery of an exoplanet that same year, the number of known worlds outside of our solar system has grown to over 5,000 and counting. Most of those initial discoveries were of massive gas giants like Jupiter and Saturn, but as researchers improved their methods and tools, which included adding the Transiting Exoplanet Survey Satellite (TESS) and the Kepler Space Telescope (nicknamed the planet finder), zeroing in on smaller and smaller planets around distant stars has become more viable. Still, finding a world made up of a significant amount of water had been particularly elusive, at least until now.

Located in the Lyra constellation, which is about 218 light-years from Earth, the two new planets orbit an M-class (aka red dwarf) star called Kepler-138 or KOL-314. As a result, Kepler-138c and Kepler 138-d are much closer to their host star, with full orbits taking mere days (13.8 and 23.1, respectively) as opposed to the 365.25 days Earth takes to orbit the sun.

Finding planets around red dwarf stars is not a coincidence, as they are significantly dimmer than main sequence stars like the sun. In fact, the Kepler telescope first spotted the two planets back in 2015, hence their names, but it wasn’t until two researchers from UdeM, Ph.D. student Caroline Piaulet and her advisor Professor Björn Benneke, took a closer look with the Hubble Space Telescope and the Spitzer Space Telescope that it was determined both 138c and 138d were essentially water worlds.

In an email to The Debrief, Piaulet explained that in total, they observed “10 transits of Kepler-138d with Spitzer, and 3 with Hubble” before determining they contained a significant amount of water and were not rocky worlds like previously discovered super-Earths.

“We previously thought that planets that were a bit larger than Earth were big balls of metal and rock, like scaled-up versions of Earth, and that’s why we called them super-Earths,” explained Benneke in a press release announcing the find. “However, we have now shown that these two planets, Kepler-138c, and d, are quite different in nature: a big fraction of their entire volume is likely composed of water.”

Benneke also noted that astronomers had theorized that planets made mostly of water likely exist, but this “is the first time we observe planets that can be confidently identified as water worlds.”

In their published paper, which appears in the December 15 edition of Nature Astronomy, the researchers note that Hubble and Spitzer did not directly observe water on the two planets. Instead, their compositions were calculated based on the way they interact with the gravity of the other bodies in the Kepler-138 system. These calculations showed that the twin super-Earths were not as dense as rocky worlds but were denser than helium/hydrogen gas giants like Jupiter. As a result, the best (and likeliest) answer was that both planets contained a significant amount of water, classifying them as water worlds.

While both Kepler-138c and d are likely swimming in water, so to speak, the researchers caution that most, if not all, of the water on these worlds may not be in liquid form on the surface.

“The water layer is so thick that it extends from the atmosphere all the way into the deep high-pressure interior of the planet,” Paulet told The Debrief. “Therefore, some of the water is in vapor form in the atmosphere while some is in high-pressure water phases such as the “supercritical” phase of water.”

Piaulet told The Debrief that some of the water could theoretically be in liquid form if clouds reflect away enough of the star’s light to cool down the planet a bit, but they’re more likely to expect a “supercritical water ocean” right below the vapor atmosphere. She also noted that pressure typically increases as you move below the surface, so the presence of underground water is even less likely.

For comparison, the researchers note that the closest analog to these planets, at least in composition, would be right here in our own cosmic backyard.

“When you think of Kepler-138 c and d, imagine our own icy water worlds in the solar system: the icy moons of Jupiter and Saturn, such as Ganymede or Europa,” Piaulet told The Debrief. “What our discovery suggests is that Kepler-138 c and d are versions of the icy moons, only bigger and brought much closer to the star such that instead of an ice layer, they harbour extended water vapor atmospheres!”

A bonus find of their research is the possible detection of a fourth planet in the system, tentatively named Kepler-138-e (The planet closest to the star is Kepler 138-b, and is a Mars-sized rocky world that is one of the smallest exoplanets ever found). Along with being a rocky world, the newly detected Kepler 138-e sits in the star’s habitable zone, where liquid water could indeed exist on its surface. In fact, the researchers believe that there is a good chance that 138-e may also have water since at least two of its fellow planets do.

“The amounts of water that we infer for Kepler-138 c and d suggest that they formed further from the star than where they are now, where water ice is abundant and can more easily be accumulated,” Piaulet told The Debrief. “The “locked” configuration of the system leads us to believe that the four planets may have been close together already while they were forming and then eventually moved in concert closer to the star. In that scenario, Kepler-138 b and e would also have formed in a water ice-rich environment and may very well have initially accumulated some water.”

Still, Piaulet cautions that since Kepler-138 e has a mass of “barely half that of the Earth,” whether or not it was able to retain that water until today “is an open question.” Unfortunately, the newly discovered planet does not transit the star from our point of view, so determining if it also has water like its two neighbors is going to take a lot more than what Hubble and Spitzer can do. As for confirming the presence of water on Kepler-138c and d or even finding other water worlds, the researchers note that help may soon be on the way.

“As our instruments and techniques become sensitive enough to find and study planets that are farther from their stars, we might start finding a lot more water worlds like Kepler-138 c and d,” explained Benneke.

Piaulet agreed, telling The Debrief that more research is needed to confirm their discovery and that telescopes like the James Webb Space Telescope may be up to the task.

“We have reason to believe that there may be more than these two “water worlds” out there, and still have yet to confirm whether what makes for their small density is indeed water or also involves methane or ammonia, which have similar densities as water,” she explained. “This question can only be solved by probing the atmospheres of these planets, indeed using space-based observatories such as JWST!”