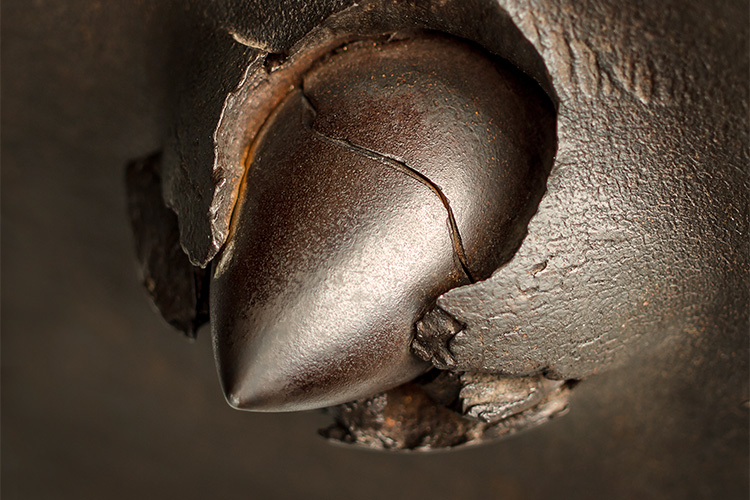 A team of researchers from the University of Kent in Canterbury, England, have created a new long-lasting synthetic-biological armor capable of absorbing impacts from supersonic projectiles.

Scientists say the discovery of this new material could revolutionize armor applications in defense and space exploration.

“This project arose from an interdisciplinary collaboration between fundamental biology, chemistry, and materials science which has resulted in the production of this amazing new class of materials,” said University of Kent professor and study co-author Dr. Jennifer Hiscock.

By examining the natural shock-absorbing properties of a protein cell called talin, the science team says it was able to create a new family of synthetic-biological hydrogel materials called “Talin Shock Absorbing Materials,” or “TSAMS.

“Our work on the protein talin, which is the cells’ natural shock absorber, has shown that this molecule contains a series of binary switch domains which open under tension and refold again once tension drops,” explained study co-author and Kent University professor, Dr. Ben Goult.

“This response to force gives talin its molecular shock-absorbing properties, protecting our cells from the effects of large force changes. When we polymerized talin into a TSAM, we found the shock absorbing properties of talin monomers imparted the material with incredible properties.”

During testing, researchers found the novel synthetic-biological material could absorb projectiles traveling as fast as 4,910 feet per second, or over four times the speed of sound. At these speeds, a projectile travels more than twice as fast as the fastest bullet and the velocity of most particles in space.

Most significantly, not only was TSAM able to stop everything fired at it, but the synthetic-biological material was also able to capture these hypervelocity projectiles intact.

“TSAMs were shown not only to absorb the impact but to capture/preserve the projectile, making TSAMs the first reported protein material to achieve this,” wrote researchers.

Ultimately, this means that TSAMs appear to better absorb and disperse a projectile’s kinetic energy than the current body armor widely used by law enforcement and military forces today.

The most common body armor worn by police forces, security guards, or private citizens is the soft-ballistic vest. Typically made from many layers of woven synthetic fibers, such as Kevlar or Twaron, most soft-ballistic vests can protect a wearer from bullets fired by small-caliber handguns or small bits of shrapnel.

Combat soldiers or police tactical units often wear ballistic vests reinforced with metal or ceramic plates, which provide additional protection against high-caliber rifle rounds. These hard-plate ballistic vests are typically combined with other items of protective clothing, such as a ballistic helmet made from Kevlar or ultra-high-molecular-weight polyethylene.

And while modern body armor is effective in preventing a bullet from penetrating, it can be cumbersome and doesn’t block a projectile’s kinetic energy. Because of this, a wearer will usually experience some degree of blunt trauma behind the armor.

Additionally, after stopping an impact, the structural integrity of modern body armor is usually irreversibly compromised and can no longer provide a wearer with reliable protection.

Why is the Air Force AWOL on the UAP Issue?

However, by incorporating this new synthetic-biological material into new body armor designs, scientists say TSAM could provide a lighter, longer-lasting body armor capable of stopping bullets and protecting against injuries caused by a projectile’s kinetic energy.

Aside from military and defense, there is also great potential for TSAMs in the aerospace industry.

The synthetic-biological material could be used to improve the safety of astronauts or better protect costly aerospace equipment from the dangers posed by tiny pieces of space debris or space dust constantly zipping around.

TSAM’s ability to capture and preserve projectiles post-impact could also be instrumental in furthering the scientific study of tiny space objects, such as micrometeoroids.

The scientists have published the results of their research into TSAMs in a paper titled, “Next generation protein-based materials capture and preserve projectiles from supersonic impacts.” A pre-print copy of the article is available on bioRxiv.

“We are very excited about the potential translational possibilities of TSAMs to solve real-world problems,” said Dr. Hiscock. “This is something that we are actively undertaking research into with the support of new collaborators within the defense and aerospace sectors.”