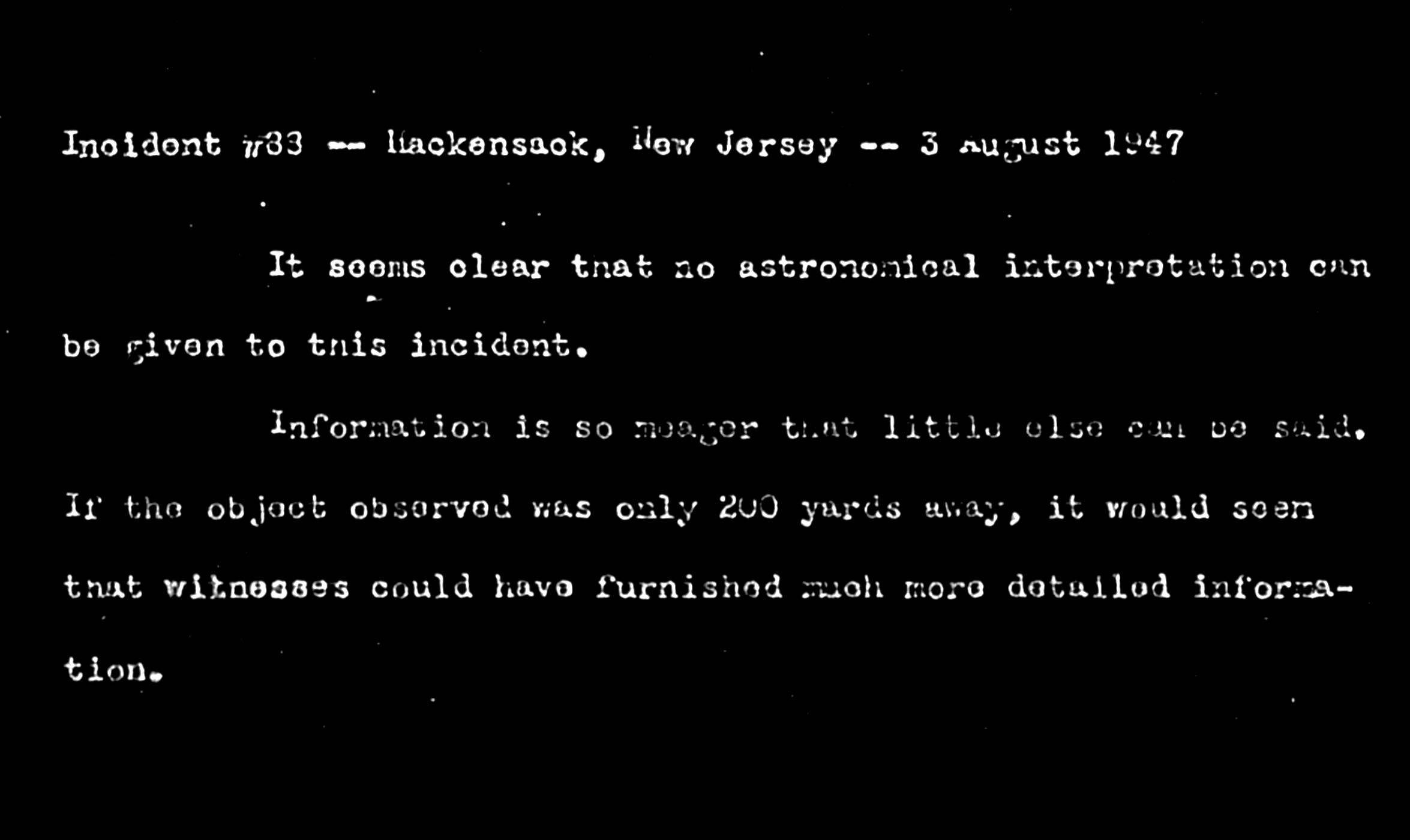 Here at The Debrief we have looked into the deeper details of a number of the historical UFO records from Project Blue Book and examined some of the similarities between these far older records and modern sightings currently being investigated by the United States government. Some are well known in the field of ufology, such as “Incident 17,” better known as the Kenneth Arnold encounter of 1947.

But another record from the days of the Blue Book investigations which has received far less attention is recorded under the category of “Incident 88.” (Follow the link for the collection of National Archive records of this event.) It is sometimes referred to as the “Hackensack event” because it was reported on August 3, 1947, in Hackensack, New Jersey.

The Blue Book archive contains 19 records associated with Incident 88 and, at first glance, it is easy to see why investigators might write this event off as an uninteresting bit of UFO history. The original Blue Book report contains scant information, suggesting that two men in Hackensack reported seeing a “flying disc” while walking back from a day of vacation activities. The men, one a soldier stationed at Fort Dix named William Truex and his friend, Charles Casella, a local resident, called in a report to the local police, describing an object in the skies that was a “disk,” roughly 200 yards in the air and “revolving slowly.”

The event was picked up in a local newspaper article, but little more was mentioned about it at the time. The Blue Book report described the report as containing “information so meager that little more can be said.” In J. Allen Hynek’s assessment of the Project Blue Book cases, he rated Incident 88 as being “non-astronomical with no explanation evident” and the “lack of evidence precludes explanation.”

But the incident in Hackensack is only mentioned in the first five articles of this collection. After those entries, all mentions of the sighting in Hackensack end. The final few documents relate to a report from the Commanding General of the Army Air Forces in Washington from August of 1947. They include a glossy photo of “specimens” purportedly from a “flying saucer” event in Danforth, Illinois in August of 1947 and a military explanation of the terrestrial nature of the samples. The letters contain the curious denial that the material had “no connection whatsoever with anything to do with the Mogul project.” This suggests an investigation into Project Mogul, which was later blamed for the Roswell crash claims.

It is the rest of the documents in this folder that may be of greater interest, however. Items 5 through 15 suggest no connection to the Hackensack, New Jersey sighting. They all revolve around correspondence between a woman from Wildwood, New Jersey who had been reporting sightings of flying saucers over that coastal area to the Air Force and had received numerous responses to her reports. Her name is redacted in most of the archived documents with the exception of one instance where she is referred to as “Mrs. Evans.”

We’ll get to the actual identity of “Mrs. Evans” in a moment, but the contents of her letters back and forth with the government tell a remarkable story. She was contacted by Wright-Patterson Air Force Base regarding her reports of flying saucers over Wildwood, New Jersey, and rolls of film she submitted to the Air Force allegedly documenting her sightings. The Air Force repeatedly assured her that her reports were being taken seriously and that her patriotism was appreciated, with requests that she continue to submit any new evidence she gathered. This correspondence continued until nearly the end of 1948. At one point, she mentioned that her son had witnessed the flying saucers with her from their yard and others in the area had reported the same.

At that point, the Blue Book records end, with no final resolution being offered. This led to our own investigation into the real identity of Mrs. Evans and any public records of reported UFO sightings over Wildwood, New Jersey during that period. This investigation would go on for months, involving multiple FOIA requests and searches of newspaper archives. The results to date have produced many remarkable hints, but also many questions that were left unanswered.

Who Was Mrs. Evans?

In order to fully research the events reported in these documents, it was first necessary to find the identity of the correspondent who was sending all of this material to the Air Force at Wright-Patterson. Who was Mrs. Evans? With some help from the good people at the Center for UFO Studies (CUFOS), we learned that unredacted versions of these documents do exist. The full name of the correspondent was Mrs. Ethel Evans. But the diligent work of CUFOS further revealed that this was not her legal name. Her real name was Ethel Rodman. Evans was a pen name, as she was the author of several books on knitting and crochet. She was something of a minor celebrity in that regard and had additional celebrity ties through her family. Her brother, E. Ray Goetz, was a Hollywood motion picture producer and the husband of stage star Irene Bordoni. The famous composer Irving Berlin was her brother-in-law.

Her full, married name was listed as Ethel Mary Goetz Rodman, and she passed away barely a year after her final correspondence with the Air Force on July 28, 1950, at Atlantic City Hospital. In almost all of the many obituaries that were published around the country after her passing, it was claimed that she was also the granddaughter of a man who had once been the Mayor of Buffalo, New York. It seemed as if someone with those sorts of connections should be fairly easy to track down and determine if more news about her sightings of flying saucers could be uncovered.

Attempting to identify her family line, we began by researching her famous grandfather. But a search of the list of past mayors of Buffalo revealed that none of them had carried the surname of Rodman, Goetz, or anything close to it. Working with the archivists at the Buffalo History Museum, we learned that every one of Mrs. Rodman’s obituaries had been inaccurate. The Mayor in question was named Philip Becker and his wife’s maiden name had been Sarah Goetz. The couple did not produce any children. Ethel Rodman was actually the former mayor’s great-niece, not his granddaughter. Their son, Edward H. Goetz, was Ethel’s father.

A Cold Trail and Many Questions

Ethel Rodman and her husband produced at least one child, a son who they named Rodman. (Giving him the curious name of Rodman Rodman.) He passed away in 1984 and is buried in a cemetery outside of Buffalo, New York near the grave of his mother. However, lengthy searches of newspaper archives in Florida (where the son lived in his later years), New Jersey, and the Buffalo area turned up basically no public records of any sort. The dearth of records goes well beyond that, though.

Will Birds or Toads Be the New Tsunami Early Warning System?

In Mrs. Rodman’s correspondence with the Air Force, she mentions being visited by military officials. She also references an appointment she had with the FBI office in Philadelphia, Pennsylvania in April of 1948. Yet aside from this small collection of documents in the Blue Book files, no other documents mentioning her appear to exist. FOIA requests to both the Air Force and the FBI have been unfruitful thus far.

Further, Mrs. Rodman mentions in her letters that other people in Wildwood had seen the “saucers” and reported them to the local police. She described “people who can be identified” as having reported such sightings. And yet a thorough search of the newspaper archives covering southern New Jersey and Philadelphia during that period did not produce any articles about sightings of flying saucers, UFOs, or any similar description in the Wildwood area. Remember that all of this was taking place in the year after Kenneth Arnold’s story exploded in the media and reports of flying saucers were inundating newspapers across the country. If there was that much activity taking place, how was none of it reported?

The Incident 88 Files Are Either a Mystery or a Mess

All of this research leads us back to the question of how this collection of documents all wound up being categorized under the heading of Incident 88. A lengthy search revealed no connection between either William Truex or Charles Casella and the Rodman clan. Truex does not mention her or anything to do with Wildwood during his interrogation by the FBI. Rodman similarly makes no reference to either of the men or anything to do with Hackensack in her correspondence with the Air Force. And what does any of this have to do with the supposed “UFO debris” found by a farmer in Danforth, Illinois in 1947? The Air Force made repeated mentions of “the Wildwood sightings” in their correspondence with Mrs. Rodman. Were they really investigating cases in that area or were they simply humoring a women who may have just imagined the entire thing?

Are all of these reports related in some way that has never been made clear? Or did the Air Force simply dump them all in the same file because there was no other obvious place to put them? Perhaps the Hackensack and Wildwood reports were combined because they were both from New Jersey, but that seems like an ineffective way to categorize records. In any event, unless Mrs. Rodman’s missing rolls of film or copies of her photos come to light, we may never know much more about this portion of the story.

We have multiple FOIA requests and appeals in process, but it will likely be a fair amount of time before those requests are finally resolved. If any new information comes to light from that process we will publish an update to this coverage.