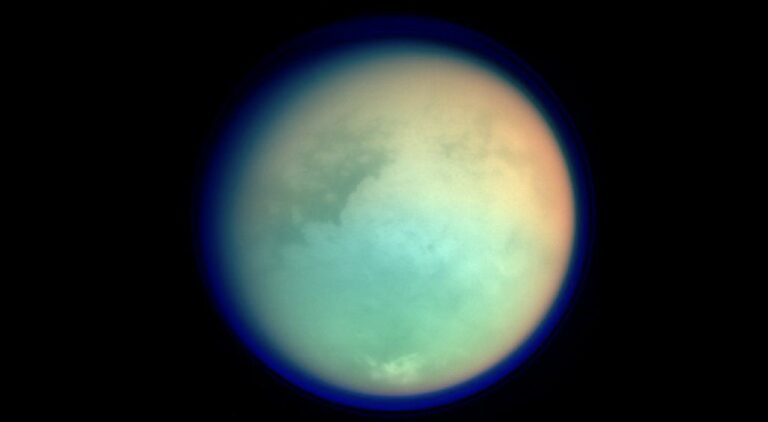 Saturn’s largest moon, Titan, has a surface temperature of 94 degrees Kelvin above absolute zero, about a third of Earth’s. Titan is located 9.5 times farther than the Earth-Sun separation, and the surface temperature of Solar system objects declines roughly as the square root of their distance from the Sun.

Coincidentally, 94 degrees was the temperature of the cosmic microwave background about a hundred million after the Big Bang when the first generation of stars formed, as described in my 2010 book. An object like Titan forming out of gas enriched by heavy elements from the first supernovae would have had this surface temperature irrespective of its distance from a star. The bath of cosmic radiation would have kept the object warm for tens of millions of years, sufficiently long for primitive forms of life to emerge on it.

This coincidence of temperatures raises the fascinating possibility of testing how early life could have arisen in the Universe by studying Titan. In other words, the question of whether Titan hosts life has cosmic implications. It could unravel the roots of Life in the Cosmos, the title of the book I published last year with my former postdoc, Manasvi Lingam.

In the Solar system, Titan is the only object besides Earth that has rivers, lakes and seas on its surface, as well as a cycle of methane and ethane liquids raining from clouds, flowing across its surface and evaporating back into the atmosphere, similarly to Earth’s water cycle. Titan is also thought to have a subsurface ocean of water. Its atmosphere is primarily nitrogen like Earth’s, but with a 5% contribution of methane.  Titan’s landscape is covered with dark dunes of hydrocarbon grains, resembling coffee grounds, primarily around the equatorial regions.

Gravity measurements by NASA’s Cassini spacecraft revealed that Titan has an underground ocean of liquid water, likely mixed with salts and ammonia. Radio signals detected by ESA’s Huygens probe in 2005 strongly suggested the presence of an ocean 55 to 80 kilometers below the icy surface, allowing for the chemistry of life as we know it. In addition, Titan’s rivers, lakes, and seas of liquid methane and ethane might serve as a foundation for the chemistry of life-as-we-do-not-know-it on the moon’s surface.

Whether the physical conditions on Titan gave birth to these forms of life is unknown.  The realization that Titan’s atmosphere is rich in organic compounds led to speculation that chemical precursors of life may have been generated there.

In June 2010, papers analyzing data from the Cassini–Huygens mission reported anomalies in the atmosphere near the surface, which could be consistent with the presence of an exotic lifeform of methane-consuming organisms but may alternatively be due to non-living chemical or meteorological processes.

The Miller–Urey experiment and its follow-ups have shown that UV irradiation of Titan’s atmosphere can generate complex molecules and polymer substances like tholins. The reaction starts with the dissociation of nitrogen and methane, forming hydrogen cyanide and acetylene.

After applying energy to a combination of gases like those in Titan’s atmosphere, the planetary scientist Sarah Hörstdetected in her laboratory in 2010 the five nucleotide bases which make  DNA and RNA, as well as amino acids – the building blocks of protein, among the many compounds produced. In 2013, NASA reported that complex organic chemicals could arise on Titan based on studies simulating the atmosphere of Titan. A few months later a paper reported the detection of polycyclic aromatic hydrocarbons (PAHs) in Titan’s upper atmosphere.

In 2015, a model for a hypothetical cell membrane capable of functioning in liquid methane was modeled. The proposed chemical base for these membranes is acrylonitrile, which was detected in Titan’s atmosphere by Cassini and ALMA.  Unfortunately, the Cassini–Huygens mission was not equipped to search for biosignatures or complex organics.

With any luck, future space probes will reveal whether Titan hosts life in its liquid bodies of methane, ethane, water, and ammonia. Finding life on Titan would not only reveal that we are not alone but also that we may be relatively late to the party. The cosmos may have been teeming with life after the first stars formed.

In retrospect, such a finding would be embarrassing to most cosmologists who treated the Universe as lifeless for over a century while focusing attention on dead objects like stars, black holes, and dark matter halos. In reality, the Universe may have been full of life starting from the first generation of Titan-like objects about a hundred million years after the Big Bang. Our cosmic neighbor, Titan, could be the first to reveal this cosmic secret to us.