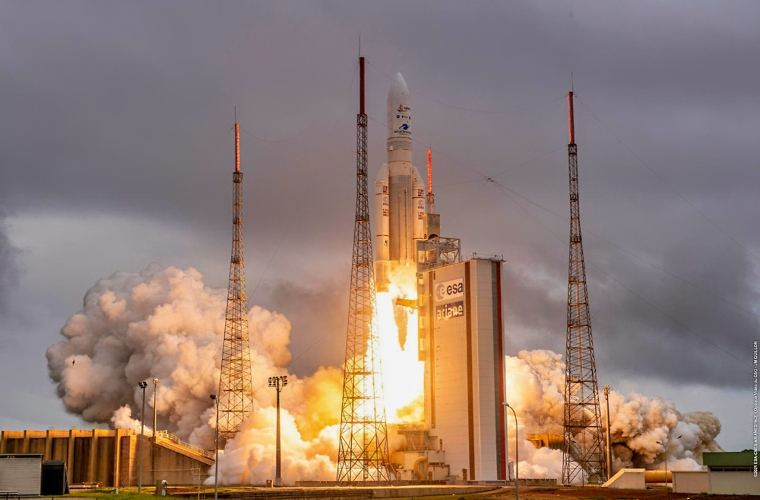 The James Webb Space Telescope Lift Off A Success, A New Era Of Astronomy Is About to Begin

As of 7:20 EST, the Ariane 5 rocket successfully launched, taking the James Webb Space Telescope far into space. Spectators at the launch site in French Guiana cheered and hollered as this monumental moment occurred. Literally decades in the making, the James Webb Space Telescope symbolizes a new era of astronomy and astrophysics, as it will go farther into space than any telescope before it. With years of redesign, budget cuts, and new technology, this telescope has overcome many challenges to rise to new heights, literally.

Looking for the Origins of Galaxies

As a collaboration between the European Space Agency (ESA), the Canadian Space Agency (CSA) and NASA, the James Webb Space Telescope is designed to succeed the infamous Hubble telescope. With the new tools installed in the James Webb Space Telescope, this telescope will look at different wavelengths than the Hubble, particularly more in the infrared spectrum. Because the universe is expanding outward as it grows, the older objects appear to have more red-light, therefore being easier to study in an infrared spectrum. Because of this, the James Webb Space Telescope is designed to specifically see the older parts of our universe. With astrophysicists and astronomers studying the formation of galaxies and black holes, this telescope is of the utmost importance to advancing these fields of science. Many researchers are excited to study the first data retrieved from this telescope after it has settled into its new position in space.

The James Webb Space Telescope is also hoping to answer some of our biggest questions, including the possible origins of life in our universe. Only time will tell what this amazing piece of technology will see, and what we can learn from its images.

Where Will The James Webb Telescope Live?

The James Webb Space Telescope, now being successfully launched, will be deployed from the Ariane 5 into space. From there, it will travel for 30 days or so to reach its stopping point, around 1 million miles from Earth. As it travels, the telescope will unfold itself, revealing its helpful sun shield, made of almost science fiction-esque material, and its giant mirror made of 18 smaller hexagonal mirrors. Both of these together allow the telescope to properly function and to capture images in higher resolution than those taken by the Hubble telescope. The first images will show up later in 2022, and will be studied by astronomers everywhere. The data from the James Webb Space Telescope is open-sourced, so if you’re a researcher wanting to use this data, it’s freely available.

The Impact of the James Webb Telescope

As this telescope has taken decades to design and develop, a giant collaboration has been established from this project. As of 2004, it has taken over 40 million hours to build this telescope, and the building and designing was done by scientists and engineers from over 14 different countries. This telescope not only symbolizes a new era of science, but also shows the power of collaboration between some of the brightest minds the world has ever known.

Kenna Castleberry is the Science Communicator at JILA and a staff writer at The Quantum Daily and The Deep Tech Insider. She has written various pieces on diversity in deep tech, covering stories from underrepresented communities, as well as discussing how science fiction contributes to the reputations of deep technologies. Follow her on Twitter @kennaculture