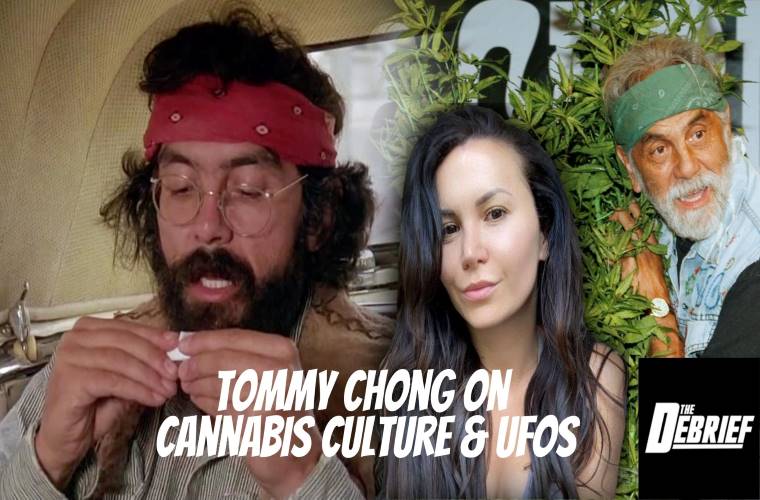 Tommy Chong first rose to fame in the 1960 and 1970 as one half of the marijuana-infused comedy duo “Cheech and Chong.” Since then, the Canadian-born counter-culture comic has been a steadfast supporter of the medicinal and spiritual benefits of cannabis, even spending time in a United States federal prison for lending his name to his son’s online bong business.

In the latest edition of Rebelliously Curious, The Debrief’s Chrissy Newton sits down with the comedy legend and cannabis culture icon as he shares his thoughts on marijuana potency, new consumption technologies like vaping, ongoing efforts at legalization and an even his own UFO experience.

“I guess it started back when I was a kid,” explains Chong regarding his almost lifelong relationship with the controversial plant. “I got turned on to cannabis quite early. I was seventeen at the time.”

Surprisingly, Chong relates how this didn’t come from a love of the hippie lifestyle (which didn’t fully exist in the 1950s) or even a way to escape his poverty-stricken upbringing, but instead arose from his interest in bodybuilding. It’s a fascinating an unexpected connection, and one worth hearing him explain.

“When Cheech and I got together and started doing our comedy,” Chong later recounts of his nearly 60 year relationship with fellow comedian Richard Anthony ‘Cheech’ Marin, “cannabis was the only thing that connected us to our audience.”

“We started out in strip clubs, so we had a lot of T & A jokes, you know?” he explained. “A lot of adult humor. But when we got down to LA, we had to relate for the kids, for the younger crowd, and the one thing that united everybody was cannabis.”

Next, Chong talks about the political environment that led to his brief incarceration for helping his son sell bongs online, and the role he believed those politics as well as his Chinese heritage may have played in him spending some time behind bars.

“I was fighting the war on a couple of fronts,” says Chong. “It was a racial equality I was looking for and am still looking for. And the fact is that cannabis turned into being an accepted and highly regarded medicine.”

As the interview progresses, Chong offers his thoughts on his “favorite Rabbi” Jesus Christ and the value of turning the other cheek, the connection he sees between cannabis and spirituality, the key differences he sees between alcohol and cannabis, the role of ‘humor’ in making political progress, and the unifying message of world religions.

When asked by Newton about the possibility of alien life, Chong offers his thoughts a well.

“AI enabled us to have drones,” he said. “We send a drone to Mars. So don’t you think that any UFOs you see are really (alien) drones?”

Perhaps unsurprisingly, given his candor, Chong also shares the details of his own UFO experiences.

“Have you ever seen a UFO yourself?” asks Newton.

“Yes. Yes, I have,” replies Chong, before recounting two distinct experiences. One, he says, lasted for two days, and another happened during his childhood years before the first human made objects had even been sent into space. Both are funs stories and worth hearing.

All told, Chrissy Newton and Tommy Chong clearly had a fun and engaging time, while also providing a unique insight into a celebrity in his 80s who has experienced a lot that life has to offer. Make sure to check out the entire interview. And always remember, if you want real answers to the hardest questions, follow Chrissy’s lead and get Rebelliously Curious.