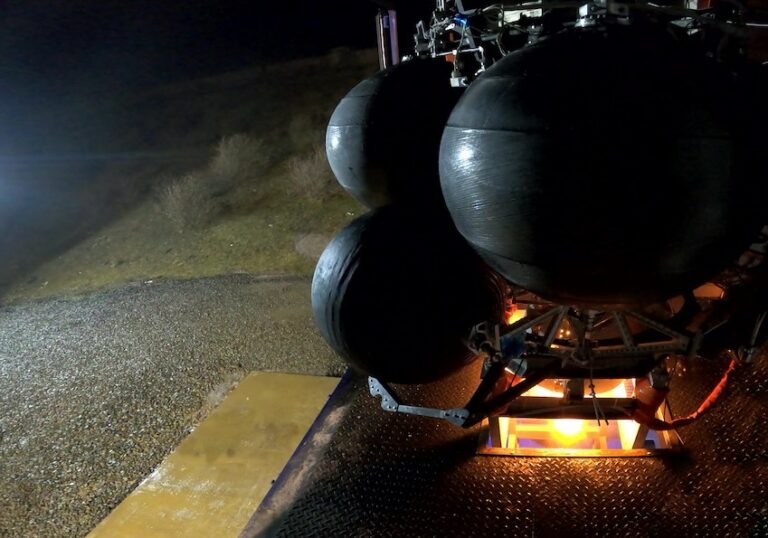 The “space tug” OTV is a mission-ready orbital vehicle capable of positioning the payload associated with its launch, before going on to perform additional tasks, such as the servicing of other space vehicles and the removal of space debris.

Skyrora CEO added that the third stage OTV was part of a greater strategy the company was perusing, aspiring to a “whole new level of efficiency with full consideration of environmental impact taken into account.”

Intended to be attached to the Skyrora XL rocket, the upper stage vehicle is able to refire its engines several times, accommodating multiple missions across disparate orbits inside a single trip, and making its own deorbit a simpler affair.

Since the news, Skyrora has increasingly fielded conversations around Britain’s responsibility in space as one of its prominent market players and enthused about the idea of the UK becoming a global role model for sustainability in space.

Their focus was the fate of the Prospero satellite, an old science satellite from the time of the space race, launched in 1971 as the first British satellite to be carried into space by a British rocket, as well as the last, as of the time of writing. A year on, I approached Alan Thompson, Head of Government Affairs at Skyrora to discuss the company’s progress, as well as to expand upon their contemporary strategies and goals.

“In December of 2021 alone about 35 distinct objects hit Earth’s atmosphere and fell into destructive re-entry,” he recounted. “As you can imagine this has become fairly common and will only accelerate over the next decade and beyond as more and more satellites and space vehicles are launched.”

To say nothing of the potentially harmful emissions introduced into the ozone from satellites and junk being vaporized by re-entry, this natural process of disposal isn’t enough. It would take thousands of years for the existing pool of debris to reach re-entry assisted by Earth’s gravity alone, and with much more junk on the way, the time has come for our space industries to become proactive about the problem.

“At present, we don’t have nearly enough space situational awareness (SSA) to grasp the scope of the debris problem,” Thompson admitted. “In order to realistically tackle it, we need be able to closely track dimensions, trajectory, rotation, and state of decay of all loose objects in our orbits. That’s a huge challenge considering debris ranges from hulking USSR wrecks to chips of paint below 10mm in diameter.”

One of the reasons our SSA is not what it could be is the lack of communal globalized resources supporting it. Lasting global tensions have resulted in a segregated set of systems all holding their cards to their chests, only speaking up about the odd projected International Space Station (ISS) conjunction, or a second-stage Long March rocket hurtling toward the planet, after it’s become a problem of potentially existential proportions.

Mr. Thompson isn’t the first to offer his recommendation that a shared database of objects is needed, much as we enjoy in the case of the global maritime industry, so we’re not rushing to step on one another’s toes in space, and our understanding of our orbits can become peer-reviewed rather than isolated.

“By taking a stronger role in controlling space, we are realizing a powerful economic advantage,” he explained. “This isn’t some meddlesome cost or a burden to avoid, it’s an investment at the ground floor at the final frontier of our history.”

Mr. Thompson admitted that, in principle, there is certainly an argument not to become hysterical over debris, given how small a hazard it currently represents, although given its certainty to exponentially grow, there is no real logic in ignoring tomorrow’s problems today. With the means to address the issue and encourage a more sustainable industry within reach, it’s our responsibility to evolve today.

“Skyrora believes the commercial solution to debris exists in the orbital servicing market. With an engineer on orbit in the form of a maneuvering maintenance vehicle, capable of orbital transfer, repair, and eventual deorbit, the economic dividends are inarguable.”

The third stage orbital maneuvering platform test-fired in 2020 is fully functional, but purpose-built for adaptability, which means “there’s still room to add all sorts of customization options for individual customers. One such possibility includes integrating 3D printing capabilities onto the platform’s robotic arms, theoretically allowing for dextrous construction or reconstruction in orbit.

“We could integrate that today, at a push, and could execute it with two platforms working together. Our development priority is on making that system more dynamic and reliable. In-space manufacturing and scientific experimentation will one day be a huge market, and we’re working closely with its first-ever customers to create the best service we can.”

Returning to Prospero, Mr. Thompson remarked “The entire derelict Prospero vehicle as well as pieces of the Black Arrow rocket that carried it remain floating in space. They’re a hazard there, and are Britain’s responsibility to deal with, but as these conversations evolve, they turn to subjects of space archaeology. These derelicts are pieces of British space science history, and some have begun suggesting that we ought to be working out how to recover them both whole for display in museums as pieces of our scientific heritage, which will be a much more complicated job.”

Skyrora isn’t alone in their work to develop an adaptive autonomous capability for space, and compete with several groups across the world’s foremost space powers, but aren’t without their own unique selling points. “While we don’t have the scale or price per kilo of SpaceX, as a smaller, more agile provider, we naturally prioritize a greater degree of tailoring for our customers.

“These leading launch providers illustrate their offering quite transparently as one that cuts costs and scales dramatically, like an economy airline. That doesn’t suit small businesses or academic projects, which both require all sorts of extra provisions to innovate. Those customers find themselves strapped with pigeonholing and hidden costs instead of the scientific precision and extra-mile assistance they need to break the mold.”

Looking ahead to the future of Skyrora and the UK space industry it compliments, Mr. Thompson summarised “We’re looking to upscale our operations to compete, but we won’t lose sight of our customer focus. With a fleet of space tugs in service, providing responsive orbital solutions for our space infrastructure, we can bring about lasting stability to the world’s orbital infrastructures.”

Laurence Russell is a technology and culture journalist specializing in the space sector. His past work has been featured in publications that include Wired and several others. Follow Laurence at his website, lcrussell.co.uk, and on Twitter @laurence_russel.