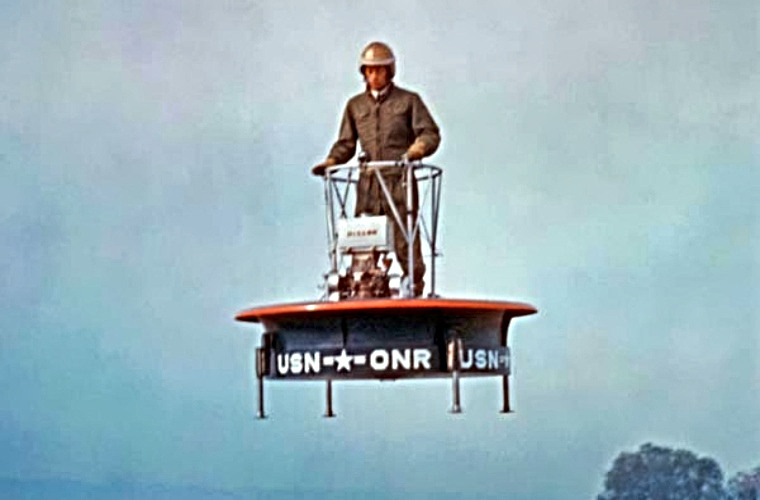 The US Military spent the 1950s developing “Flying Platforms”


From Flying Shoes to the VZ-1 Pawnee.

Long before Marty McFly tore up Courthouse Square on a Mattel hoverboard, the US military-industrial complex worked secretly to develop their own flying platform technology. The VZ-1 Pawnee was eventually born, and it was a bizarre.

The development of flying platforms began in the 1940s with Charles Zimmerman. An aeronautical engineer, Zimmerman dreamt of providing low-cost flight to everyone. Creatively working to make flight accessible, Zimmerman developed a vertical take-off apparatus called “Flying Shoes,”–a platform with two small engines. The engines were connected to a pair of upwards-facing propellers that the pilot strapped to their feet. The pilot could control the “Flying Shoes” by simply shifting their weight in the direction they wished to move–a form of movement referred to as “kinesthetic control” (much like a bike or surfboard).

Zimmerman’s Flying Shoe design was eventually acquired by Stanley Hiller, who designed the world’s first successful coaxial helicopter–when he was still 15. The Flying Shoe concept went nowhere (in part because Hiller’s first successful production helicopter, the UH-12, consumed so much of Hiller’s time). In the meantime, Zimmerman continued to experiment with kinesthetically controlled flying platforms. One used compressed air channeled through fire hoses for thrust. Another, named the Whirligig, used a compressed air-driven propeller placed beneath a platform to create thrust. Both of these experiments were easy to operate and stable in flight. The US military took notice.

On September 17, 1953, the US Army issued contracts to de Lackner Helicopters and Hiller Helicopters for kinesthetically controlled flying platform prototypes. de Lackner’s efforts resulted in the HZ-1 Aerocycle, a one-man “personal helicopter.” The Aerocycle, intended for novice operators (with just 20 minutes of instruction), featured a cross-shaped frame, rotary-blades, a platform for the pilot (situated just above the exposed blades), and an outboard motor (courtesy of Mercury Marine). The engine was controlled with a twist-grip motorcycle-type throttle. The Aerocycle looked dangerous. And the craft happened to be more challenging to fly than intended, proving unsuitable for novice operators. Twice, during testing, the Aerocycle’s rotary blades became enmeshed, causing a crash. The de Lackner project was abandoned. Hiller’s efforts were slightly more successful.

Hiller melded Zimmerman’s concept with Alexander Satin’s ducted fan concept to create the Model 1031 “Flying Platform.” Developed in secret, the 1031 used a ring-like-duct to direct thrust from the propellers downward, creating lift. Three 1031’s were built, flying for the first time in 1955. Conducting test flights was difficult because there was nothing to protect the pilot in the event of engine failure or loss of control. So, for test flights, the pilot was tethered to a high wire suspended between two towers. Fortunately, the craft was inherently stable, easy to operate, and nimble, despite the standing pilot having a high center of gravity. The 1031’s stability was primarily due to how the 1031 duct’s forward edge provided more lift than the trailing edge. The effect was an upward pitching movement, which created the benefit of stability, but limited speeds to just 16 miles per hour.

Hiller experimented with various configurations of the 1031, and none could combine adequate thrust with adequate stability. When the Army placed an order for a variant with three engines (for contingency purposes), the resulting product was the VZ-1 Pawnee. To accommodate the extra engine, the VZ-1 Pawnee featured a larger platform and larger rotors. The excess weight degraded performance further while also making kinesthetic control more difficult for the pilot. After the construction and testing of three prototypes, the Pawnee was abandoned, too. The flying platform idea was no longer needed; by 1961, the Bell UH-1 Huey helicopter was being used for troop movement. After leaving the Pawnee behind, Hiller experimented briefly with a flying Jeep and a VTOL coleopter–but the company went under in 1966.

Do Astronomers Exist on Other Habitable Planets?

While the flying platform lacked military application, the concept captivated the general public. Because the concept’s successes were publicized–and the failures kept private–many citizens felt a potentially society-changing form of transportation had been too hastily abandoned. Yet, the flying platform lives on, in the backyards and garages of inventors and enthusiasts, those who haven’t given up on the concept.