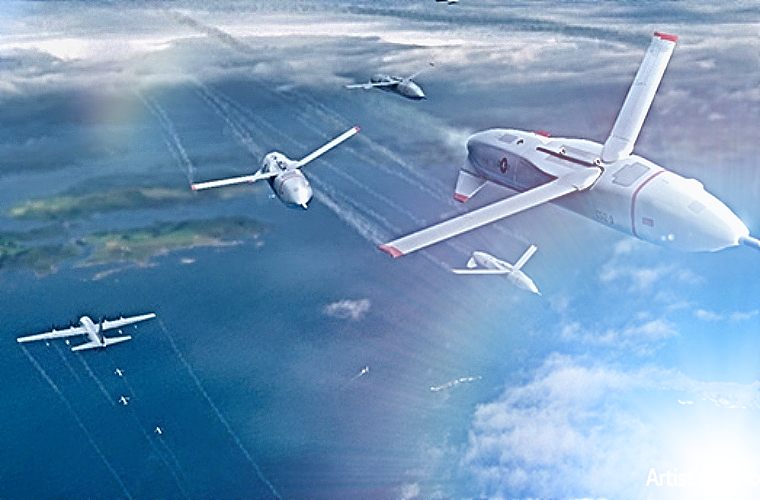 DARPA’s Latest Gremlins Drone Will Cause Some Serious Mischief


Reduce, Reuse, Recycle. The Drone Swarm You Can Use Over and Over

DARPA’s Gremlins program is developing reusable air-launched drones that could carry small bombs or other forms of ammunition. Though the Gremlins program states that its purpose is to gather intelligence and have “non-kinetic” payloads—meaning non-explosive—its newest initiative suggests otherwise.

Background: What is the Gremlins program?

Named after the tiny mischief makers that supposedly caused glitches in WWII bombers, the Gremlins program envisions fleets of small unmanned air systems (UAS) to be launched out of larger aircraft. But whereas UAS are traditionally a one-and-done thing, the Gremlins program seeks to retrieve them in the air and carry them home for further usage.

The Gremlins project was initiated in 2015, with the production of an X-61 Gremlin air vehicle awarded to Dynetics. The X-61 carrier is 14 feet long and weighs 1500 pounds, cruising at around 450 mph for up to four hours.

Analysis: Is This The Future of Drone Warfare?

A priority with the Gremlins program is that each drone can be reused 20 times. This is achieved through an aerial retrieval technique in which they are docked with a probe extending from a mothership and then are reeled in and recovered.

In an interview with Military.com, Steve Fendley, President of the Unmanned Systems Division at Kratos, the firm overseeing the construction of the drones, said, “[The military wants] to be able to deploy and retrieve a volley quantity, which is approximately 20 of those aircraft [the X-61A].”

While Fendley did not specify any payloads the Gremlins might carry in the near future, he indicated that they are equipped to carry small bombs, smaller attack drones, or loitering ammunition. A drone carrying another drone is also known as the ‘Russian doll of death’— this concept is achieving popularity in the U.S. and China.

The Gremlins program is just one part of what Fendley views as a three-tiered crewless aircraft family of systems for the U.S. military. “That will evolve this year. I think you’re going to see the Gremlins really be a high-focus item for the Defense Department moving forward because it’s kind of a third leg of that attributable capability set,” he said.

The other two components are Kratos’ UTAP-22 and the XQ-58A Valkyrie, both of which are currently being used to support other technological efforts in the Air Force. Artificial intelligence and machine learning will also be instrumental in the development of Kratos’ three-tiered system.

While gremlins once held a connotation of being mischievous but relatively harmless little things, it’s possible that with DARPA’s new initiative, that could change dramatically.

The next round of flight testing is scheduled to take place later this year. If those tests are successful, it won’t be long before the Gremlins are out in the world.