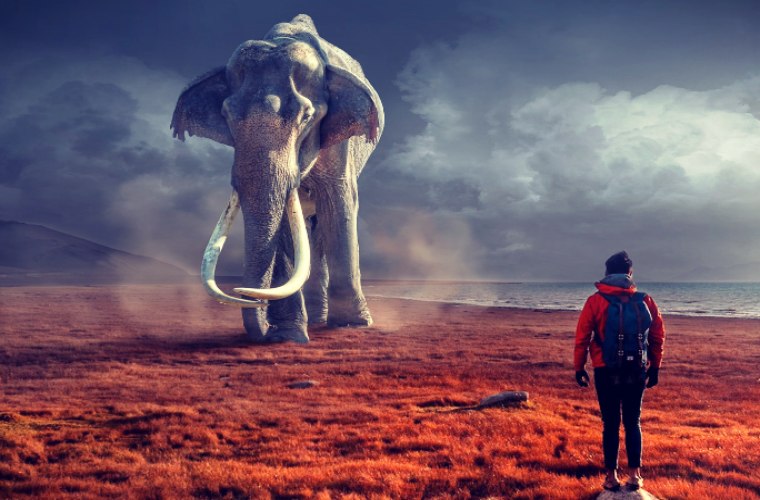 The Woolly Mammoth Will Be Back In 6 Years, Says New Start-Up in Partnership with Harvard University

Colossal, a new Texas-based start-up, plans to bring the woolly mammoth back from the dead and return an ancient species to the Arctic tundra.

Working with Harvard University’s Dr. George Church, a pioneer who laid the scientific groundwork for the de-extinction of the mammoth, Colossal is a “new wave of thoughtful and disruptive conservation aimed at combating the effects of climate change through ecosystem restoration,” according to their press release. Using CRISPR gene-editing technology, Colossal’s goal is to “rewild” the Siberian Tundra with mammoths for the purpose of conservation and to restore the ecosystem back to when mammoths roamed.

“Successfully reintroducing the mammoth to the tundra for the purposes of rewilding and reestablishing the Arctic grassland is a radical new approach at combating climate change and helping to protect the trapped carbon and methane in the permafrost,” Ben Lamm, co-founder and Colossal’s CEO, told The Debrief.

Lamm, a serial entrepreneur who has helmed multiple successful start-ups, has always had a deep personal interest in ecological conservation. He explained that rewilding is a critical tool in the environmental kit.

Rewilding, as a conservation method, has two approaches. First, pulling humans and human interaction out of an area allows nature to ‘take over’ and heal itself. Secondly, rewilding demands a reintroduction of lost animal species back to their environment to create a top-down rebalancing of the ecosystem. The most dramatic example of this occurred in the nineties when wolves were reintroduced to Yellowstone National Park. Still unfolding today, the wolves have created a massive cascading effect that seems to be reshaping the park’s ecology for the better.

“By bringing the woolly mammoth back into the tundra and restoring the Arctic grasslands, allowing the grasses and steppe environments to thrive again will help with carbon sequestering and methane suppression,” Lamm explained. “Returning extinct species to their original habitats can help restore degraded ecosystems, which in turn, has the potential to reverse the effects of climate change.”

Lamm and the scientific team at Colossal are planning on mimicking the success of the Yellowstone example, but they are doing it with a long-extinct species.

“The tundra environment has suffered without the existence of woolly mammoths and other cold-tolerant megafauna,” Lamm told The Debrief. “Mammoths inadvertently acted as natural geo-engineers by trampling mosses and shrubs, uprooting trees, and disturbing the landscape, which in turn, helps the Arctic steppe grasslands thrive.”

Researchers believe the wooly mammoth went extinct about 10,000 years ago due to climatic changes and human hunting. However, small isolated pockets of the species survived on St. Paul Island in the Bering Sea and Wrangel Island in the Arctic Ocean, lasting as late as 4,000 years ago.

“Through these genetic engineering technologies, the cold-tolerant nucleotide(s) will replace the Asian elephant-specific nucleotide(s), generating increasingly mammoth-like genomes in Asian elephant cells,” Lamm explained. “Aiding in our process of precise genetic engineering is the annotation and characterization of the surviving elephant species genomes. Colossal has funded the sequencing, full assembly, and annotation of the Asian and African elephants through an active partnership with the Vertebrate Genome Project.”

This, and by deriving induced Pluripotent Stem Cells (iPSCs) from Asian and African elephant tissue, the team will have a better understanding of how many mammoths form successful herds, as well as be able to test out what specific cold-tolerant adaptations will allow for these new mammoths to thrive. Moreover, by using stem cells, the team can measure the effects of mammoth genes on elephant cells and make very precise edits to the DNA.

Once the editing process is complete, these new “mammoth-like cells” will be switched with the nucleus of an Asian elephant egg cell using a technique called Somatic Cell Nuclear Transfer (SCNT). A few electrical pulses stimulate the hybrid egg cell’s fertilization, and you get your first mammoth embryo.

After verification that the cells meet the team’s mammoth requirements, Colossal will transfer the embryo into a surrogate elephant.

“The viable embryos will give rise to cold-adapted elephants who resemble a woolly mammoth at both the phenotypic and genetic level,” Lamm stated. “The gestation period for elephants is 18-22 months. Colossal’s goal is to have our first woolly mammoth calves within the next 4 to 6 years.”

Church has been working on this for years and has made significant headway into splicing mammoth and Asian elephant DNA. If successful, Colossal will work with Arctic rewilding scientists Sergey and Nikita Zimov, who manage a 160 square kilometer area known as Pleistocene Park in northern Siberia.

There has been significant debate concerning the ethics of bringing the woolly mammoth back. Concerns ranging from the resources required, animal rights, to the fact that the funds allocated could be spent on saving currently endangered species, to the very distinct possibility that there will be an urge to place these animals in zoos or private collections to earn profit or for bragging rights, are not without merit.

It is difficult not to imagine a Jurassic Park situation where the act of ‘playing God’ gets a whole bunch of people killed. While the mammoths won’t go on a massive Raptor-like killing spree, the common philosophical consensus seems to be that “just because we can, should we?”

Lamm and Colossal view it differently.

“Our goal is long-term species preservation and survival through rewilding,” Lamm stated. Well aware that there are ethical concerns, Colossal has brought in a team of ethicists.

“It’s important to balance science with ethics, and it is something we take very seriously, which is why we have a diverse group of scientists, conservationists, and ethicists on our scientific advisory board. George Church also has a bioethicist as part of his lab that oversees the work at Church Lab.”

Fugal, whose portfolio often dips into emerging technology and exotic science, owns the infamous Skinwalker Ranch in Utah. Dabbling in the paranormal may be in Fugal’s comfort zone, so bringing a dead species back to life seems to track.

“Colossal is boldly positioned to revolutionize the way we view and renew our world. I am proud to be joining the visionary Ben Lamm on this journey,” Fugal told The Debrief.

Something big is potentially coming from Colossal. Whether it is a woolly mammoth or not- the collective imagination is fueled by the fact that a long-extinct species may once again be returning to this world.