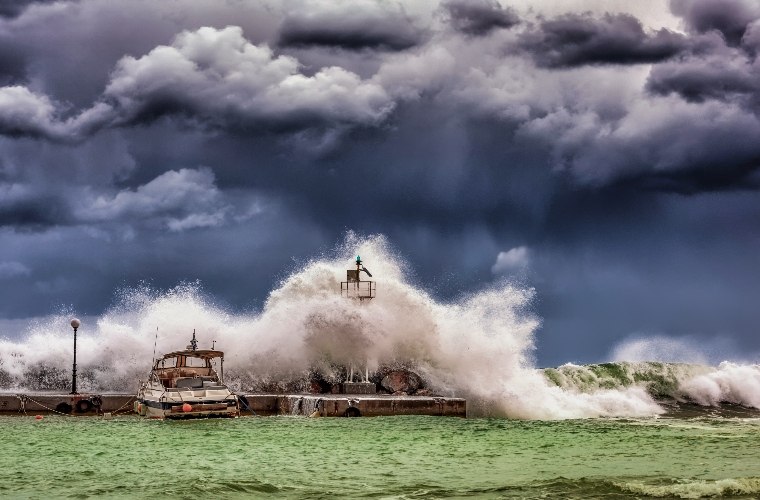 Will Birds or Toads Be the New Tsunami Early Warning System?

There have been several tsunami warnings issued over the past couple of years (nine of them in the first eight days of September of 2021 alone), but thankfully none of them produced much in the way of wave damage. Sadly, that’s not always the case. The tsunami that struck most of the Pacific basin in 2004 led to tens of thousands of lives being lost and structural damage that still hasn’t been entirely repaired.

While new technology has helped scientists produce better, faster data to warn us of a possible massive wave – such as the DART system – the amount of notice that humans living near the coasts of our oceans receive is still often alarmingly small. It’s believed that the next time the Cascadia subduction zone off the coast of the northwestern United States and Canada experiences a major slip (this is a question of “when,” not “if”) there will be, at most, a 15-20 minute warning before a wave of 100 feet in height or more comes ashore.

The problem is that tsunamis are produced by strong earthquakes under the ocean, resulting in major shifts in the seabed. And despite all of the years of studying the planet’s fault lines that have gone into the subject, we’re still not very good at predicting when such massive earthquakes will take place. But a group of scientists have recently begun investigating whether or not there may be a different way of detecting signals indicating an impending quake that doesn’t involve seismometers or ground-penetrating radar. They believe the answer may come from mother nature in the form of birds.

SOME ANIMALS APPEAR TO KNOW WHEN TROUBLE IS APPROACHING

This year, a team from France’s National Museum of Natural History (NMNH) began testing a theory that had previously been posited based on the migratory patterns of the bar-tailed godwit, a bird that annually travels back and forth between New Zealand and Alaska. The birds seem to be remarkably adept at avoiding storms. Other animal species have shown what appear to be similar predictive abilities, including what appears to be an advanced knowledge of when earthquakes will strike.

While widely considered to be little more than anecdotal testimony, witnesses from the 2004 tsunami did report birds and other animals heading inland before the wave struck. This led researchers with the new Kivi Kuaka project, led by Frédéric Jiguet, an ornithologist at NMNH, to capture specimens of multiple species of birds and equip them with tags capable of satellite tracking to observe their movements before and during climatic and seismic events such as typhoons and tsunamis.

If these birds truly were able to capture and interpret signals about impending disruptions to their environment and act on them, perhaps they could be used as an early warning system. But could this actually work?

We regularly receive warnings about impending hurricanes and typhoons from the National Weather Service. In the modern era, we’ve come to take this data for granted. So one question that is regularly raised is why we can’t generate the same sort of warnings about earthquakes, particularly those that might spawn tsunamis. Why is that?

The Debrief contacted Dr. Wendy Bohon, a geologist at the Incorporated Research Institutions for Seismology in Washington, D.C., who studies earthquakes. She told us that it’s true that earthquakes and the fault lines that produce them are indeed more challenging to study than storms, but meteorologists don’t really “predict” hurricanes and typhoons in a precise fashion either. They make projections based on the available data. She cited Hurricane Harvey as a prime example.

“Currently, earthquakes can not be predicted,” she said. “And actually storms can’t be predicted either. Take hurricanes, for example. Meteorologists can tell us that conditions are favorable for storm formation, or hurricane strengthening, and they can give us an idea of the storm track and speed, but they can’t actually predict for certain what will happen.”

“What meteorologists do,” she continued, “is forecast the weather, or give us an idea of what could happen and the odds of it occurring during a certain time frame (like a 60% chance of rain at 6:00 on Wed), which is also what we do with earthquakes just over longer time scales.”

As an example, Dr. Bohon offered the forecast that the San Francisco Bay area has a 72% chance of a magnitude 6.7 or greater earthquake between 2014 and 2043. Neither hurricane nor earthquake predictions are precise. The difference in the predicted ranges are based on variables in the available data.

SO ARE BIRDS OR OTHER ANIMALS A BETTER ALTERNATIVE?

The NMNH study is hardly the first time that scientists have explored the idea that animals might be able to sense and react to an impending earthquake, including those leading to tsunamis. While largely considered anecdotal in nature, there have been reports of animals reacting in this fashion in the past, and some scientists have taken the question seriously.

Aside from the reports of odd animal behavior prior to the 2004 tsunami, other studies have been conducted. A breeding group of toads were recorded abandoning their breeding area near L’Aquila in Italy in 2009 only days before a major earthquake, not returning until all of the major aftershocks had subsided. Major changes in animal behavior in the Peruvian Andes were recorded just before a major earthquake there. Reports exist of China installing monitoring equipment to observe the behavior of snakes as an early earthquake warning system.

Unfortunately, how these animals were able to “detect” an impending earthquake has been the subject of speculation. It’s been suggested by some scientists that anything from radon gas being emitted along active fault lines to ultrasound waves too low for humans to hear or other emissions caused by the pressure exerted between tectonic plates could have been detected by animals, and if humans might not be able to pick up such signals as well.

The Debrief asked Dr. Bohon if any such measurements of these sorts of hints given by fault lines were verifiable. Her answer was shot and to the point. She simply said, “no.”

SO WHY ARE Birds SO GOOD AT AVOIDING EARTHQUAKES?

At first glance, it appears that some of the scientific studies of animals apparently sensing the approach of an earthquake somehow and reacting to save themselves are quite compelling. And it’s been suggested that such a skill would enhance any species’ chances for survival. So shouldn’t this qualify as solid science?

Dr. Bohon responded to The Debrief with a variety of questions about the actual data underlying the study. As it turns out, there are many more questions to be answered about animal behavior before we leap to the conclusion that animals are reliable earthquake predictors. One important point she noted was that it’s certainly possible that animals may have some senses that would allow them to detect the earliest stages of a seismic event before humans would notice anything and react accordingly. But that wouldn’t give them a head start of several days. So what about those toads in Italy?

“I am open to the idea that animals could be sensing some type of earthquake “precursor,” but I have yet to see convincing evidence that this is the case,” she said. “For instance, in the case of the toads, did all toads of that type leave the area? Have toads of that type ever been known to have this behavior in other locations or at other times? 74 km is pretty far away from that event. Why would toads that far away care, and where did they go? Did they move closer to the earthquake epicenter or move farther away? Did those toads leave before other earthquakes that were nearby and likely to create higher levels of shaking? And why would they leave?”

Dr. Bohon continued, pointing out that evolutionary defenses generally appear in response to actual threats to the survival of the species. This may not have been the case with the toads.

“Earthquakes are not actually dangerous in and of themselves. Generally, they only cause problems for us humans because they destroy our man-made structures and infrastructure. What threat would that pose to the toads that would require them to flee? Also, it makes sense that if there was some type of environmental disturbance, like an earthquake, the toads might not return to their breeding ground in their normal numbers. I would like to see evidence that the toads’ behavior was directly linked to the earthquake, and I feel like there are too many other potential reasons they could have exhibited that behavior to definitely tie it to that event.”

SO THIS ISN’T GOING TO WORK?

We simply can’t entirely rule out the possibility that there may be some sort of natural transfer of information that certain animals can detect when it comes to an imminent earthquake. Even if such a phenomenon occurs, it still doesn’t appear to be testable and repeatable under rigorous scientific analysis. While this might change in the future, we are still not at the point where we can fully grasp what signals the animals are detecting (assuming they are) or what their responses indicate.

Imagine for a moment that the scientific community collectively decided that the movements of a particular breed of birds common to Washington state were such an indicator. How many times would the residents of Seattle put up with a massive, panic-driven scramble toward higher ground after a flock of Swainson’s Thrushes headed for the county line but no earthquake or towering wall of water followed?

There is clearly much still to be learned from nature, and this avenue of exploration has attracted the attention of serious scientists. But until more data can be obtained and published under peer-review standards, the idea of biological earthquake detectors or predictors seems to remain in the category of an open question at best.