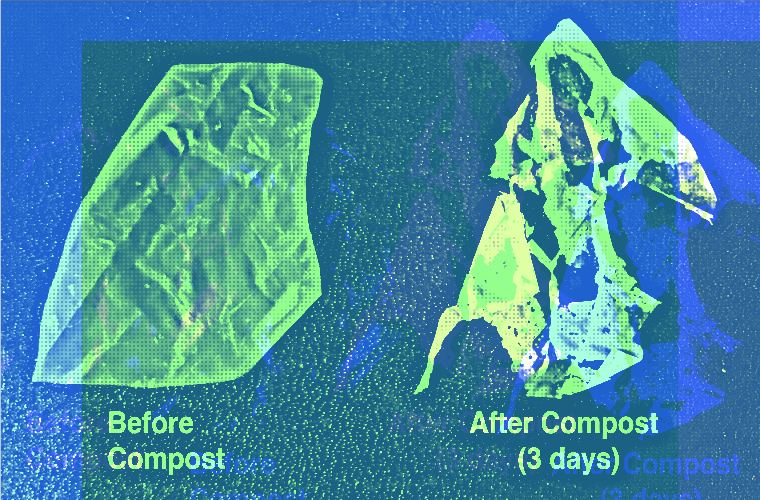 This Plastic Is Compostable and Could End ‘Forever Plastics’

Few human-made substances have caused as much damage to the global environment as plastics. Fortunately, researchers at the University of California, Berkeley, have announced a new, compostable plastic that can be recycled with just a little heat and water. And, according to the release, as much as 98% of the plastic made using this technique successfully breaks down into smaller, biodegradable pieces within only two weeks.

“People are now prepared to move into biodegradable polymers for single-use plastics, but if it turns out that it creates more problems than it’s worth, then the policy might revert back,” said Ting Xu, UC Berkeley professor of materials science, engineering, and chemistry in the press release announcing their results. “We are basically saying that we are on the right track. We can solve this continuing problem of single-use plastics not being biodegradable.”

Ever since Walter Booke’s Mr. McGuire pronounced humanity’s future with that single, infamous word in the 1967 cinematic classic “The Graduate,” the real world story of the versatile, often indestructible resin has been significantly more complicated. Once touted as the future of everything from automobiles to skyscrapers, plastics have become both ubiquitous and notorious at the same time.

That’s primarily because, for all of their advantages, nearly every one of the lightweight, sturdy, cheap to manufacture plastics in use today are also particularly difficult to break down. This has led to a growing, some say critical, environmental crisis, including such notorious tragic examples as the
Great Pacific Garbage Patch, a Texas-sized collection of virtually indestructible plastic waste swirling in the middle of the Pacific Ocean.

To address this looming catastrophe, policymakers and environmentalists have preached things like reduction, recycling, and reuse to cut down on the amount of plastic waste making it into our landfills, lakes, and oceans before often ending up in the food chain. Unfortunately, decades of efforts have proven insufficient to keep up with the demand for a growing field of plastic products, leading to today’s situation.

More recently, composting of supposedly environmentally friendly “biodegradable” plastics has been tried, but with limited results.

“Biodegradable plastics have been advertised as one solution to the plastic pollution problem bedeviling the world,” the press release announcing the breakthrough research states, “but today’s “compostable” plastic bags, utensils and cup lids don’t break down during typical composting and contaminate other recyclable plastics, creating headaches for recyclers.”

This issue, the release also notes, leads to an even more significant problem since “most compostable plastics, made primarily of the polyester known as polylactic acid, or PLA, end up in landfills and last as long as forever plastics.” Like the name sounds, forever plastics are projected to take millennia to break down, leaving a trail of environmental damage in their wake.

To address this situation, professor Xu and her research team first looked at why plastics were so hard to break down in the first place.

“The most durable plastics have an almost crystal-like molecular structure, with polymer fibers aligned so tightly that water can’t penetrate them, let alone microbes that might chew up the polymers,” the press release says. And it is in this area that the UC Berkeley research team decided to focus their efforts.

They started, Xu told The Debrief, by looking at enzymes that previous research dating back to 2011 had proven could break down plastic fibers, then tried to figure out how to get those enzymes into the tightly aligned spaces that have so far foiled previous efforts. Their solution? Introducing the plastic-eating enzymes during the plastic resin manufacturing process, essentially binding them right into the base material of plastic bags, bottles, and other similar products when they are first being made.

“If you have the enzyme only on the surface of the plastic, it would just etch down very slowly,” Xu said in the release. “You want it distributed nanoscopically everywhere so that, essentially, each of them just needs to eat away their polymer neighbors, and then the whole material disintegrates.”

For the plastic-gobbling enzymes to be successfully built right into the original base material that these products are made from, they had to be placed into a protective polymer shell, so they don’t start breaking down the plastic right away, essentially turning these suspended enzymes into veritable, plastic eating’ time bombs’ waiting to be set off.

To light the fuse, Xu’s research says you simply treat the polymer to a hot bath, around 50 degrees Celsius (122 F) in a standard industrial composting facility. Within two weeks, 98% of the plastic breaks down into smaller, biodegradable pieces.

This timeline, it turns out, melds perfectly with municipal composting, which the study notes typically takes 60 to 90 days to turn food and plant waste into viable compost. The study also points out that plastics made with the enzymes built right in do not degrade at lower temperatures or during periods of brief dampness, meaning even a polyester shirt made this way won’t break down from sweat or a lukewarm laundering.

Also, the study notes, soaking the treated plastics in water for three months at room temperature did not cause them to degrade either. Although, according to the release, nudging the temperature up just a bit did the trick.

“People want to compost in their home without getting their hands dirty, they want to compost in water,” Xu said. “So, that is what we tried to see. We used warm tap water. Just warm it up to the right temperature, then put it in, and we see in a few days it disappears.”

The study also notes that this process eliminates microplastics, a byproduct of many such techniques (and a pollutant all on its own). The polymer coating the team uses to protect the enzymes breaks down safely during this process.

As a final point, the release makes sure to point out that the ability to protect the enzyme inside the polymer coating while keeping it from falling apart, (something it says proteins are known to do when they are outside their normal environment) is the key innovation to come out of the UC Berkeley team’s work. And, Xu told The Debrief, it was also her team’s biggest challenge. “Develop[ing] molecular insights, and knowing what does what inside this complex system. Without these molecular insights, we won’t be able to achieve nanoscopic enzyme dispersion, nor modulate degradation pathway.”

So, we asked, are the enzymes being held in suspended animation alive?

“It depends on what you consider is alive,” Xu told The Debrief. “Enzymes are essentially biological catalysts, and we would like them to be active to do the work. They don’t self-replicate like other forms of life, such as viruses, and do not contain genetic information. They can be readily deactivated.”

The four-year research project was partially funded by the Department of Defense’s Army Research Office (ARO), an element of the U.S. Army Combat Capabilities Development Command’s Army Research Laboratory. However, when asked by The Debrief about the Army’s role in her research, the professor said the ARO gave them no specific instructions on how to go about accomplishing their goal.

“Nothing except doing good science,” she said. “No string attached. They supported us to do basic science and benefit civilians and protect soldiers on the field.” The professor also made sure to point out that her team does no classified research.

Outlook: The Future of Compostable Plastic

As for what’s next, Xu told The Debrief, “We would like to see this to be in grocery stores and on your kitchen countertop, and [eventually] eliminate plastics in the compost facilities.”

Even before that goal is accomplished, Xu also said she is already looking at ways to use her process to degrade PLA’s and treat heavy-duty plastics so they can be better recycled for future use. This means taking on a type of industrial polymer used in a whole range of plastic products; Polyolefins.

“Polyolefins are a major contributor to plastic waste,” Xu told The Debrief. “They are different from polyesters and are chemically dormant and are very cheap. By chemically modifying them (with her process), they will become higher-value products, creating a financial incentive for their recycling. The buzz word is upcycling or valorization!”

Of course, even with her breakthrough results, Xu thinks the original tenants of reduction, reuse, and recycling are critical to the environment’s long-term health. Future generations will need to modify how they deal with these types of materials regardless of any scientific advancements like hers.

“It is good for millennials to think about this and start a conversation that will change the way we interface with Earth,” she said in the original release. “Look at all the wasted stuff we throw away: clothing, shoes, electronics like cellphones and computers. We are taking things from the Earth at a faster rate than we can return them. Don’t go back to Earth to mine for these materials, but mine whatever you have, and then convert it to something else.”

As far as how humanity might accomplish such lofty goals, Xu offered The Debrief a final piece of sage advice.

“Learn from nature and be in harmony with our planet. Do not take faster than what we can return. Treasure what you have, although it is tempting to get the latest, the greatest thing next. If you do, that is OK; just be responsible where and how you discard them.”

In the end, it will most likely take a combination of old-school recycling and newly developed processes like the one pioneered by Xu and her UC Berkeley team to deal with the plastics already polluting our environment. However, suppose the professor’s enzymatic process does prove to be a large-scale success. In that case, it may also be time for a 2021 remake of that famous Graduate scene, only this time Mr. McGuire can look into Dustin Hoffman’s character’s eyes and simply say, “Enzymes!”