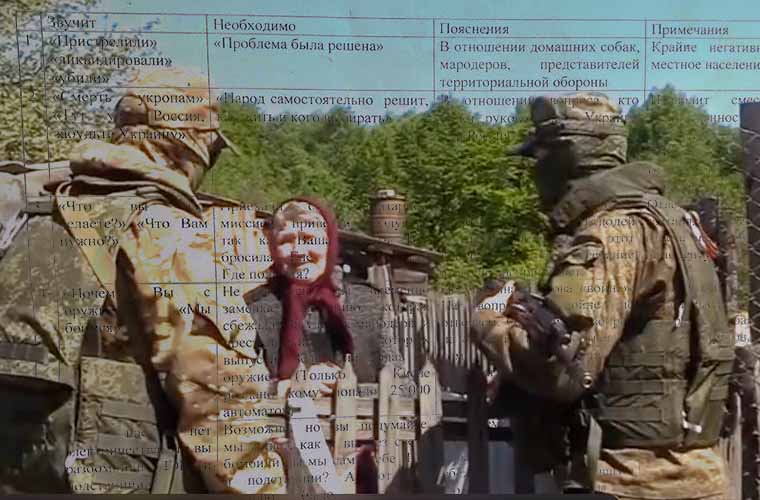 The documents were recently discovered after being abandoned by Russian troops near the Kyiv suburb of Dymer.

Based on the documents, Moscow’s plans for winning over the hearts and minds of Ukrainians whose lives have been in constant peril since Russia launched its invasion over three months ago are relatively straightforward.

Blame everything on Ukrainians themselves. More specifically, the current Ukrainian government and the United States.

“We do not blame “Khokhlov” (an ethnic slur for Ukrainians) or Ukrainians for everything. We blame the puppets Poroshenko, Zelensky, and their puppeteers of the USA,” a section reads.

The documents chart eight key themes that should be avoided regarding questions Ukrainians might pose to Russian soldiers. Further sections cover the appropriate or “essential” responses and explanations for how a message supports the Kremlin’s PSYOP goals. In some instances, additional supplementary notes are provided for added clarification.

If confronted with questions about pets, looters, or territorial defense fighters killed by Russian forces, soldiers are instructed to avoid the terms “shot,” “liquidated,” or “killed.” The document notes these terms “[have] an extremely negative effect on the representatives of the local population.”

Instead, Russian soldiers are told to reply, “The problem has been solved.”

Many themes show that a central tenet of the Kremlin’s PSYOP focus involves shifting blame for the war on the current Ukrainian government.

If asked why troops are armed or locals express fear towards Russian authorities, soldiers are instructed to avoid mentioning the word “war” and say they are “temporarily replacing the police that has abandoned you.” The document says an emphasis should be placed on locals being abandoned by the “Kyiv police.”

An element of fear is added by instructing soldiers to tell the populace that bands of looters and “criminals armed by Zelensky” are roaming the streets.

When it comes to the underlying PSYOP message, the document states, “The main task is to sow thoughts to the people how weak the Ukrainian authorities are and how they have abandoned them without food, pensions, [and] salaries.”

Russian President Vladimir Putin has steadfastly claimed the reason for the invasion of Ukraine- or as he terms it a “special military operation” – has been “denazification” and to protect the pro-Russian separatist regions of the so-called Donetsk and Luhansk People’s Republics.

However, Russian soldiers are instructed to avoid saying “that people are being fired at in [Russian controlled] Donbas.” The document notes, “Locals do not take this well.”

[Full English Translation of the Documents Below]

Instead, the PSYOP document instructs Russian soldiers to portray a delusory alternate reality in which the shelling, missile strikes, and fighting for the past three months have all been the work of a corrupt Ukrainian nationalist regime.

“We bring humanitarian aid and food since your government abandoned you,” soldiers are told to respond if asked, “Why are you here?”

If concerns are raised about a lack of electricity, Russian troops are told to remind locals that they are equally without electric power while shifting blame for the outages on “retreating police and administrations [who] undermined substation and don’t care about their own population.”

A second option is provided in which soldiers can tell an aggrieved populace that, “The entire north of Ukraine was de-energized by order of the authorities from Kyiv.”

Contradicting the laughable idea that Russia’s invasion is some kind of humanitarian mission, a cornerstone of the Kremlin’s PSYOP motif seemingly involves shifting any responsibility for rebuilding areas ravaged by war from Russia onto the Ukrainian people.

Four of the eight themes outlined in the PSYOP document discuss shifting responsibility or “burden” onto the local population.

In fact, Russian troops are specifically told to avoid telling locals to “forget Ukraine” because occupied areas are now Russian-controlled. Instead, soldiers should say, “The people will decide on their own how to live and who to choose.”

“It will allow shifting the vector of responsibility from Russia to the local population and their ability to take responsibility for themselves up to a certain point,” the document reads.

In one section, soldiers are told to invoke religion to avoid the question of whether they are Ukrainians or Russians. “We are both Ukrainian and Russian, but the main thing is that we are Orthodox [Christians], and we have no divides.”

Being against “gay parades, the split of Orthodoxy, and the sale of land to foreigners” are given as examples that can be used to establish a thread of commonality between soldiers and locals.

The PSYOP directive explains why it is essential to invoke Orthodox Christianity when influencing the opinions, emotions, attitudes, and behavior of locals toward the Russian occupying forces.

“Nine years of propaganda equated the image of Russians to that of an invader. The image of an Orthodox Christian is spotless.”

On Telegram, the Project Manager of the Lviv Media Forum, Melaniya-Mariya Podolyak, reported that the two-page set of PSYOP instructions was found in Dymer by employees of the National Museum of History of Ukraine after it had been abandoned by previously occupying Russian troops.

How the documents were discovered is somewhat ironic, given PSYOP instructions repeatedly tell Russian soldiers to reinforce the idea that Ukrainian authorities have abandoned them.

Speaking under a condition of anonymity, an official with Ukraine’s Security Services (SBU) told The Debrief that they weren’t familiar with these specific documents. However, there was no reason to doubt their authenticity.

“Everything mentioned is entirely consistent with Russian messaging in temporarily occupied territories.”

From the start of Russia’s invasion to mid-March, Russia’s President, Vladimir Putin, claimed Moscow had no intentions to occupy or seize Ukrainian territory.

“Our plans are not to occupy Ukraine. We do not plan to impose ourselves on anyone,” said Putin on February 24, during an early morning television address announcing the start of a “special military operation” to “denazify” and “demilitarize” Ukraine.

However, similar to the previous claims that Russia had no intention of invading Ukraine, Putin’s promises are often not abiding.

In early May, a senior pro-Russian official in the occupied Ukrainian region of Kherson, Kirill Stremousov, told NPR  he fully expected Russia to annex the currently occupied areas in southern Ukraine, including Kherson and Mariupol.

More recently, Stremousov said that current Ukrainian counter-attacks in the area could delay a formal bid for Kherson to join Russia.

“It won’t happen by autumn. We’re preparing an administrative system, and then towards next year, we will see what the situation is like,” Stremousov was quoted as saying by Reuters.

Other abandoned Russian military documents discovered in the northeastern town of Trostyanets in Sumy Oblast revealed Putin had initially hoped to seize all of Ukraine.

“[SBU found] important documents of soldiers of the Russian Federation’s Armed Forces that give a clear understanding that Russia was preparing to seize all the territory of Ukraine,” Oleksiy Sukhachev, the director of Ukraine’s State Bureau of Investigation, said in a statement.

“First of all, before the formation of a state apparatus and the legislative framework, we will be forced with the concepts of “Ukraine” and “Ukrainians,” the document reads.