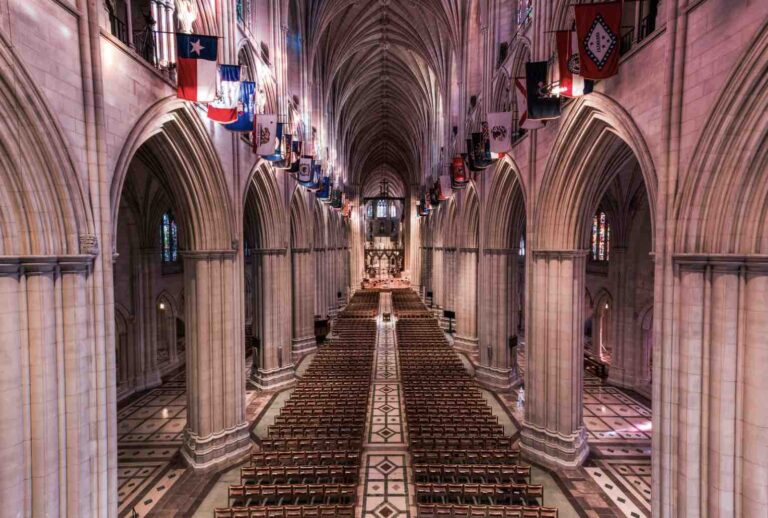 No less than 10,647 pipes sang eerily in chorus, bellowing the surreal sounds of Louis Vierne’s Pièces de Fantaisie from the Washington National Cathedral’s Great Organ on Wednesday night. The instrument—a 1938 Ernest M. Skinner model and the largest of its kind anywhere in the nation’s capital—issued its melodies against the subdued chatter of an audience assembling nearby, setting an unearthly tone for a night of discussion about one of the greatest prospects of science in our time: the future of human space exploration.

“We have an extraterrestrial treasure built into the very fabric of this building,” said Rev. Randolph Marshall Hollerith, Dean of the Washington National Cathedral, who began the event by referencing a 7-gram moon rock returned to Earth by the crew of Apollo 11, which now rests within one of the cathedral’s windows.

Following a brief introduction by moderator David Ignatius of the Washington Post, the first panel of the evening led off with him being joined by Haines, along with a prerecorded series of questions conducted with Nelson.

After an introductory statement by Nelson, Ignatius posed his first question to Haines, which included a query as to whether her agency is collecting any “early signs” of possible extraterrestrial intelligence.

“On this topic of life out there, you issued an extraordinary preliminary assessment in June on unidentified aerial phenomena,” Ignatius said. “To summarize that report, you studied 144 reports from U.S. government sources. 80 had sensors that had made the identifications; in 18 of these instances observers, I’m quoting, ‘reported unusual UAP flight characteristics.’ You sorted these into five different bins, the last called just ‘other.’

“I want to ask you to share with the audience your takeaway after the completion of that report,” Ignatius said, “and what your own view is once you look at the evidence?”

“I mean, I think the bottom line is that we don’t understand everything that we’re seeing,” Haines responded. “And that’s probably not surprising to anybody in many respects.”

“It was a report that, really, Congress asked us to produce a report that assessed what we saw as the threat, essentially, from unidentified aerial phenomenon, and what our sort of best understanding was of the different reports that we had identified. And it stretched over from, I think 2004 until 2021…. and we had different categories, as you said.”

After listing the various categories into which UAP may fall, as detailed within the report delivered to the Office of the Director of National Intelligence in June, Haines elaborated briefly on the enigmatic “other” category into which some of the UAP observed by our military has apparently fallen.

“The fifth one was ‘other’,” she said. “And that basically indicated that we were pretty sure we weren’t going to be able to characterize every single one of these reports in the various categories that we’d identified because, frankly, we were not able to understand everything about it.”

“A large portion of that is based on the fact that we don’t have a consistent way of reporting this information,” Haines further stated. “We need to integrate, frankly, a lot of data that we get. We need to get better at collecting data that’s useful to us from different sensors that are available to us, and we need to deepen our analysis in these areas.

“The main issues that Congress and others have been concerned about are safety of flight concerns and counterintelligence issues,” Haines added.

“But of course,” Haines said, “there’s always the question, ‘of is there something else that we simply do not understand,’ that might come extraterrestrially.”

“People are reporting things, we’re picking up things technically,” Haines explained. “We’re doing a variety of work to try to understand what it is we’re seeing. We are then taking other information that we have to determine, ‘is it something that we know about in that area? Is there some other reporting that we might not normally think of as being connected?’ And then we do our analysis as we normally would, to sort of say, okay, put it into context. What are the likely possible options? How do we characterize it, bucket it… think about it? ”

“All of that,” Haines added, “is sort of the standard way in which you work. But it doesn’t mean that we are definitely going to be able to tell if we’re being observed under the circumstances.”

Haines also expressed that there may be several ways that evidence of extraterrestrial intelligence could be discovered.

“I think that there’s a lot of different ways in which that might be revealed,” Haines said, “but certainly, we’re working to make sure that we understand what we do see, and what phenomenon is identified.”

“Otherwise, we’re gonna have to wait for Bill [Nelson’s] science work to actually reveal some of these additional possibilities,” Haines said.

“What’s the coolest thing that the intelligence community is doing in space that we don’t know that you can talk about?” Ignatius then said coming back over to Haines.

“I don’t think there’s really anything. I’m gonna get fired if I talk about the coolest thing that you don’t know about,” Haines laughed, before encouraging those in attendance to consider becoming future recruits to work within the intelligence community.

“We have some phenomenal stuff that we will show you,” Haines added, “once you get your clearance.”

Following Haines and Nelson’s appearance, the second moderator of the night, Adi Ignatius of Harvard Business Review, was joined by Blue Origin founder Jeff Bezos, whom he asked at one point about the question of intelligent life in the universe.

“There’s so many stars just in this galaxy, and then so many galaxies. The odds that we are the only intelligent life in the universe seem vanishingly small to me,” Bezos said.

“Now if you ask me have we been visited by those extrasolar intelligences, I very much doubt that. I think we’d know if we had been,” Bezos said. “But are they out there? Probably.”

Shifting away from the technical side of space exploration, the final panel discussion of the evening between Rev. Wilkinson and Loeb, moderated by Rev. Hollerith, focused primarily on the question of extraterrestrial life, though infused at times with passing flourishes of theology and philosophy.

However, when it came to the discussion over the search for extraterrestrial life, Avi Loeb wasted no words.

“My point is simple,” Loeb said. “Let’s look at the sky and check if there’s any equipment—A.I. astronauts—that were sent by other civilizations. And that’s the goal of the Galileo Project.”

The Galileo Project, an initiative launched in July by the Harvard-Smithsonian Center for Astrophysics, features an international team of researchers whose stated goal “is to bring the search for extraterrestrial technological signatures from accidental or anecdotal observations and legends to the mainstream of transparent, validated, and systematic scientific research.” Founded by Loeb, who serves as its director, notable recent additions to the project include former Pentagon counterintelligence agent Luis Elizondo, former Deputy Assistant Secretary of Defense for Intelligence Christopher Mellon, and founding publisher of Skeptic magazine Michael Shermer.

“We plan to use telescopes and look at the sky,” Loeb added, “because if we don’t look through our windows, we can argue that we don’t have neighbors, but that will not get rid of our neighbors.”

“Oumuamua was the first interstellar object that came from outside the solar system that was spotted near Earth in 2017,” Loeb said, referencing his book, Extraterrestrial: The First Sign of Intelligent Life Beyond Earth, which presented the argument that the mysterious object might have represented some kind of interstellar alien probe or other technology.

“It didn’t look like a comet or an asteroid,” Loeb said. “It looked very weird.”

“My point is, let’s get a high-resolution image—a megapixel image—of an object like [Oumuamua], and figure out whether it has screws, and bolts, whether it has buttons that we can press… or whether it’s a rock.”

“Let’s embark on this learning experience,” Loeb added. “That’s what the Galileo Project is all about.”

Later, Reverend Hollerith asked Loeb his thoughts on the objects observed and filmed by Navy pilots in recent years, which were reported on in the New York Times in 2017.

“That’s the second branch of the Galileo Project,” Loeb said. “We’d like to take high-resolution images of unidentified aerial phenomenon and figure out what they are. Because it’s not a philosophical question. If you have good enough data, you can tell.”

Shifting again toward the philosophical, Loeb, who went on to elaborate on the problems that stem from the human ego and its influence on past global conflicts, expressed hope that the eventual discovery of extraterrestrial life might help to unite life on Earth, and help humans to coexist more peaceably.

“My hope is that once we discover intelligence out there, we will treat each other with more respect. As equal members of the human species.”

Loeb also elaborated on the possibility that the eventual discovery of evidence of extraterrestrial visitors may take the form of alien artificial intelligence, rather than the biological beings who created it.

“If these are A.I. systems,” Loeb said, “not biological creatures, we might need our own A.I. systems to figure them out. Sort of like relying on our kids to interpret content that we find on the internet because they’re more computer savvy.”

Loeb also proposed the notion of searching Earth for past evidence of alien technology that might have been left behind during visits by extraterrestrial explorers in early historic, or even prehistoric times, as well as similar technological implements that may exist outside Earth.

“In space, it means looking for equipment that they sent and that kept accumulating in space just like plastic bottles on the surface of the ocean. That’s what the Galileo Project aims to do; search through telescopes for equipment floating in space.”

“It sounds to me [like] common sense,” Loeb added. “And with 100 million dollars, we should be able to say something very interesting on this question.”

From the music selections that introduced and concluded the events of the evening, to the diverse list of guests and the topics they addressed, “Our Future in Space” framed its presentation of the coming years of space exploration almost mystically; a juxtaposition of old-meets-new that was often charming in the way it evoked the timeless sense of wonder that calls to us, whether that be from unexplored regions of space, or from within the imagination alone.

“I think that there is something about exploring the heavens,” Wilkinson said as the evening concluded. “To be surprised, both as a scientist and as a theologian. For the God that I believe in is both a surprising God at times, and he breaks the insularity of some of my prejudices, and some of my preconceptions.”

“A supporter of space exploration, because it’s thinking God’s thoughts after him.”