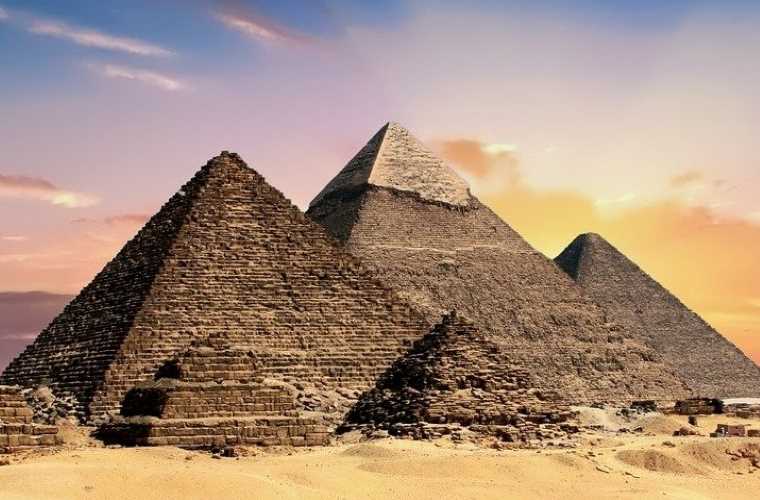 Will Cosmic Rays Reveal the Secrets of the Pyramids?

A team of researchers is planning to use cosmic rays to look deeper into Egypt’s Great Pyramid than ever before. Called muon tomography, this process of detecting high-energy particles revealed a previously undiscovered chamber inside the pyramid back in 2017.

The Great Pyramid of Giza is the last of the Seven Wonders of the Ancient World. While most scholars agree the stone monument was intended as a tomb for the pharaoh Khufu (also known as Cheops), who reigned around 2,500 B.C., there is still no consensus on how it was constructed. Conventional scanning tools like X-rays and ground-penetrating radar can’t peer deep enough into the dense stone structures to provide answers. And direct exploration (aka digging) is out of the question.

In 1969, a novel approach utilizing the deep-penetrating power of high-energy particles caused by cosmic rays showed some initial promise in scanning one of the other pyramids on the Giza plateau. Then in 2017, an effort known as ScanPyramids used that same technique to examine the Great Pyramid, even revealing a previously unknown “void” within the pyramid’s interior. Now, another effort to scan the Great Pyramid using the same technique is underway, only this time the detection equipment is highly mobile and up to 100 times stronger.

“It has been half a century since Luiz Alvarez and his team used cosmic-ray muon imaging to look for hidden chambers in Khafres Pyramid,” explains the research paper outlining the Exploring the Great Pyramid (EGP) Mission. “Advances in instrumentation for High-Energy Physics (HEP) allowed a new survey, ScanPyramids, to make important new discoveries at the Great Pyramid (Khufu) utilizing the same basic technique that the Alvarez team used, but now with modern instrumentation.”

That technique involves detecting a type of subatomic particle known as a muon that is created when cosmic rays slam into Earth’s atmosphere. Once created, muons only last a fraction of a second. Fortunately for researchers, muons produced by cosmic rays are moving at nearly light speed. As a result, a large number of muons slam into and even pass through the Earth. By tracking these decaying muons as they pass through the stone of the Great Pyramid, researchers can peer deeper into the structure’s interior than ever before.

“The Exploring the Great Pyramid Mission takes a different approach to imaging large structures with cosmic-ray muons,” the paper explains. “The use of very large muon telescopes placed outside the structure, in our case, the Great Pyramid of Khufu on the Giza plateau, can produce much higher resolution images due to the large number of detected muons. In addition, by moving the telescopes around the base of the pyramid, true tomographic image reconstruction can be performed for the first time.”

According to researchers, that increased mobility should make the work go faster than in 2017. But even more important, the telescope’s size and sensitivity should return highly-detailed results that far surpass the groundbreaking 2017 effort.

“The Exploring the Great Pyramid Mission plans to field a very-large muon telescope system that will be transformational with respect to the field of cosmic-ray muon imaging,” the paper explains. “We plan to field a telescope system that has upwards of 100 times the sensitivity of the equipment that has recently been used at the Great Pyramid, will image muons from nearly all angles and will, for the first time, produce a true tomographic image of such a large structure.”

Ideally, an actual tomographic image should reveal much more detail about the various densities within the pyramid. Like 2017, density data analysis may reveal air pockets or large voids, but the increased sensitivity of this effort should also show differences between types of materials used in construction. Plus, this scan should be able to identify slight, previously undetectable structural variances and “discontinuities” that provide further insights into construction techniques used to build these incredible feats of engineering.

COSMIC RAYS, PYRAMIDS, AND THE PROGRESS OF SCIENCE

As noted, the hands-on portion of the EGP mission is not yet underway, with most work thus far consisting of software simulations and planning. Furthermore, the researchers expect to spend two years scanning, repositioning, and scanning again once the equipment is in place. So don’t expect another headline-grabbing announcement any time soon.

Of course, like much of the Great Pyramid’s history, there is bound to be controversy when the new effort results are announced.

For example, while most in the field celebrated the 2017 discovery of a previously unknown void inside the pyramid as one of the most significant discoveries in the structure’s 4,500-year history, Egypt’s appointed caretaker of the Giza facility Dr. Zahi Hawass was particularly dismissive. “They found nothing,” he told the New York Times. “This paper offers nothing to Egyptology. Zero.”

Regardless of outside opinions, scientists will continue to try and solve the mysteries of the Great Pyramid of Giza using an ever-advancing arsenal of tools and technology. And given the success of using cosmic rays only five years ago, this latest effort may finally explain how this icon of history was constructed once and for all. Then Zahi can go suck an egg.