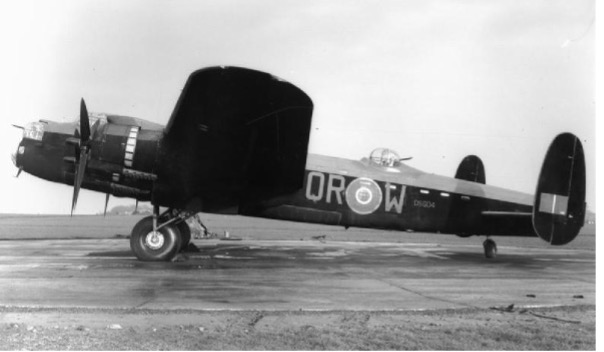 They may not have been called “Foo Fighters” at the time, but Royal Air Force crews saw and reported strange lights and other objects following their aircraft over Europe at least two years before American night-fighter crews coined the name for this strange phenomenon.

Eighty years ago, one of the first recorded sightings occurred during a raid on the Turin engine works on the night of 28/29th November 1942. The crew of a Lancaster bomber based at RAF Syerston reported seeing a huge torpedo-shaped object over northern Italy, as detailed in the following report submitted by their unit to No.5 Group, Bomber Command:

“They believe it to have been 200-300 feet in length and its width is estimated at 1/5th or 1/6th of its length. The speed was estimated at 500 mph and it had four pairs of red lights spaced at equal distances along its body. These lights did not appear in any way like exhaust flames; no trace was seen. The object kept a level course.”

According to the report, Warrant Officer R. Lever and his crew saw the huge object twice, the first time south-west of Turin at around 11,000 feet and the second about five minutes later as it travelled along a valley in the Alps, below the level of the peaks. The pilot reported that he had seen a similar object north of Amsterdam about three months earlier. Air Vice Marshal Alec Coryton, No.5 Group’s commanding officer, passed the report onto Bomber Command Headquarters for further analysis, together with the following note:

“Herewith a copy of report received from a crew of a Lancaster after a raid on Turin. The crew refuses to be shaken in their story in the face of the usual ridicule and banter.”

An Avro Lancaster Mk.II bomber belonging to No.61 Squadron, Royal Air Force – an identical machine from the same unit was involved in a UFO encounter over northern Italy in November 1942.

Report from the commander of RAF Syerston to No.5 Group Headquarters about a strange object witnessed by the crew of a No.61 Squadron Lancaster bomber on the night of 28/29th November 1942.

It is extremely unlikely that the Germans could have flown a slow, lumbering airship over the Italian Alps in December 1942 and in any case, the reported speed was way in excess of any operational Luftwaffe machine of the time, let alone a Zeppelin. Its size – reported as at least 200 or 300 feet – was also larger than any conventional aircraft the Germans had managed to successfully put into service by the end of 1942. Whatever was operating over northern Italy that night remains a complete mystery. Further silver and “cigar-shaped” objects were observed by bomber crews in February 1944, one over Aachen and the other near Koblenz. There are references to these objects in reports compiled by Bomber Command at the time. “Cigar-shaped” objects would of course become a feature of UFO reports throughout the 1950s, 1960s and 1970s – and even the Tic-Tacs of more modern encounters could potentially be described in such a fashion.

Intelligence documents buried away in the National Archives located in Kew Gardens, London, describe rocket-like objects that were observed maneuvering in the vicinity of RAF bomber aircraft as early as August 1942. The following appears in a Bomber Command Operational Research Section report titled “’Meteor’ projectile”, describing events noted during a mission to Aachen:

“A bright white light rose from the ground to 8,000 feet, where it flew approximately level for about two minutes; a few crews reported that it appeared to zig-zag along the ground before taking off in a climbing turn. Brilliant white periodic bursts occurred which may have caused a change of course; some crews thought that it subdivided when the bursts took place.” 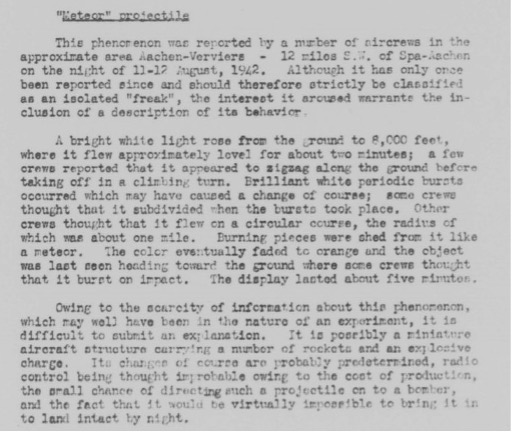 This incident occurred at least six months before the Germans started experimenting with their first surface-to-air missile designs and took place well away from the testing facilities at Peenemünde, on the Baltic coast.

By November 1944, the same month that American night-fighter pilots operating over western Germany first coined the term “Foo Fighters”, Bomber Command’s Operational Research Section had come to some sort of decision about what was being seen in the skies over Europe by crews, albeit a rather vague one:

“The phenomenon is seen as a light moving very fast. The general consensus of opinion is that no shape can be seen, and no aircraft identified and that the objects do not fire.”

However, the August and November 1942 events were not the first reports of strange activity over the skies of Europe. There are references to an even earlier encounter, one involving the Polish crew of an RAF Wellington bomber over Holland at the end of March 1942. According to the pilot, Sergeant Roman Sobiński, a Polish pilot serving with the RAF, a bright orange object approached their aircraft from astern as they returned from a raid on Essen.

Sobiński emigrated to Canada after the war and was interviewed in the early 1960s about the incident. During the interview, he stated that he had ordered his tail gunner, Sergeant Stanislaw Sep-Szarzynski, to open fire with machine-guns on the object when it got close, but it appeared invulnerable to machine-gun fire:

“Now the peculiar thing about it was that they [the bullets] were just going in and that was the end of it; they wouldn’t fall away. Those tracers would just enter and that was it. That lasted for maybe two minutes and after that time this shiny object changed position and at terrific speed moved over to our port side, almost at the same distance, about 200 yards from the wing and then it stayed there.”

The nose turret gunner, Sergeant Krzysztof Grabowski, also started firing at what was thought to be a German night-fighter. Once again, however, no discernible damage was inflicted on whatever was out there. Unbelievably, the brilliant orange object changed position for a second time, moving to a point ahead of the Wellington, whereupon it was fired on yet again by the nose turret gunner. After a few minutes of maintaining station with the bomber as it flew through the night skies over Occupied Europe, the mysterious object shot off into the distance at a 45 degree angle and was quickly lost to sight.

Returning to base, Sobiński was told by the pilot of another Wellington flying behind him that his crew had also seen the object. No note of the incident was made in the squadron’s mission records and no official reference to the event has ever been discovered elsewhere.

However, further research has unearthed reports of mysterious lights which followed Allied aircraft going back even as early as March 1940, several months before the Germans had even established the first Luftwaffe night-fighter units. “Aircraft” carrying what were described as “searchlights” were reported in numbers from the spring of 1940, these sightings continuing into 1942. The RAF experimented with airborne searchlights between 1941 and 1943 but the operational deployment of the eventual system was both troublesome and ineffective. The Germans never tried a similar tactic themselves, preferring to rely on the development of radar to assist their ground-based searchlight and anti-aircraft gun batteries. It is therefore unclear as to what these lights were, and what aircraft – if indeed they were fitted to one – were involved.

An extract from a 1940 report detailing “unidentified aircraft” carrying “searchlights”. The Germans did not experiment with such devices and therefore the exact nature of whatever was following the bombers concerned is unknown.

What these bomber crews were seeing and reporting back in World War 2 is unknown. The Luftwaffe never deployed air-to-air mortars or missiles for use at night. They did attempt to develop various surface-to-air missiles but none ever became operational and they certainly weren’t tested over the Balkans in 1944 – or western Europe in the spring of 1940. The first operational German jet fighters were flown at night in December 1944 but only in very small numbers until the end of the war, being confined to the defence of Berlin. They couldn’t have accounted for the dozens of sightings throughout that year – or earlier.

Over the years, UFO researchers and those interested in the subject have largely accepted that Kenneth Arnold’s June 1947 encounter over the Pacific North-West heralded the start of the modern phenomenon. However, it is becoming increasingly clear that aircrew were seeing mysterious lights and strange objects at least five years prior to his sighting. What was being seen by RAF aircrew 80 years ago remains a complete mystery.