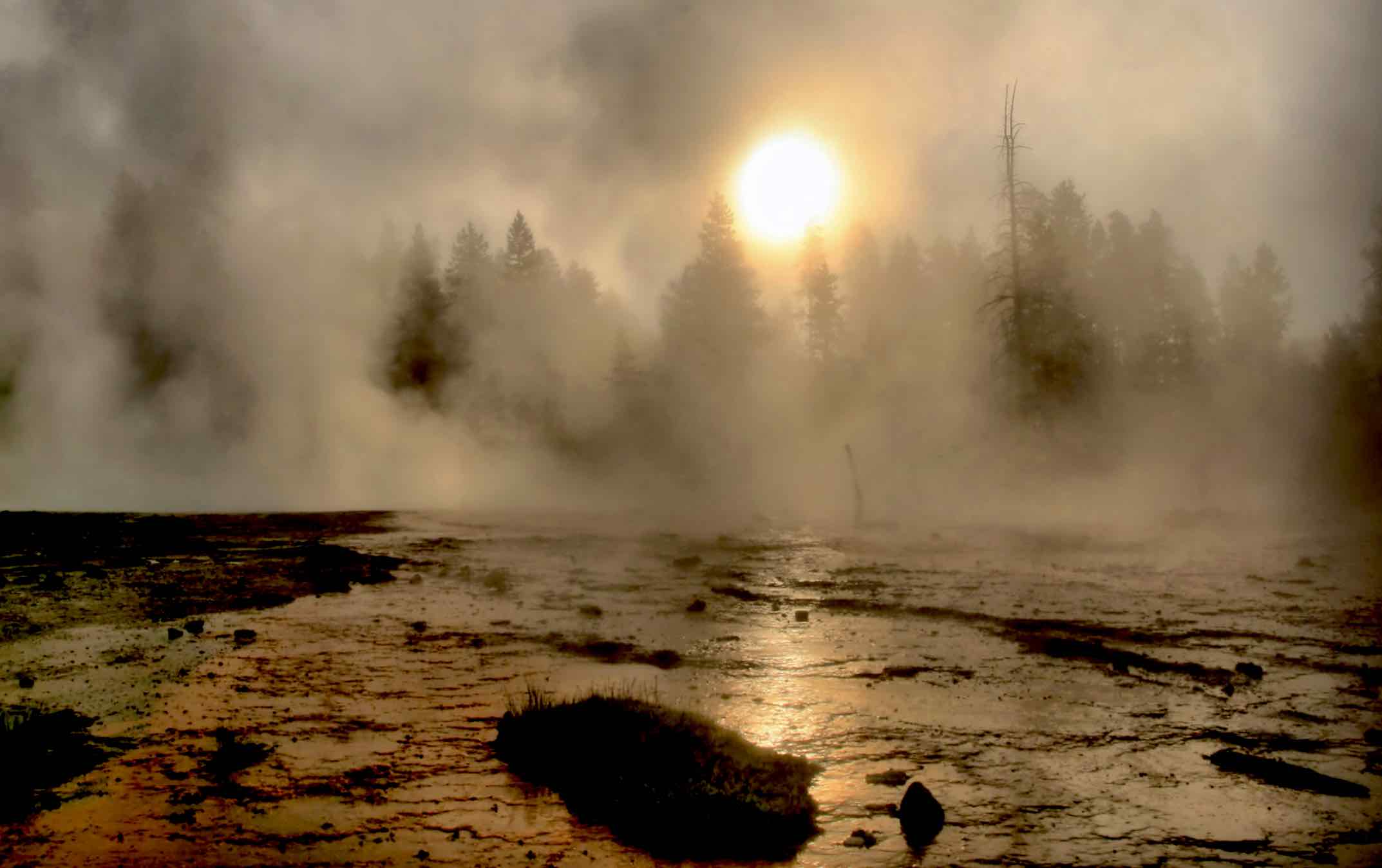 Steam above thermal springs at Yellowstone (B. Inaglory/CC 3.0)

The Yellowstone Supervolcano, one of the world’s largest volcanoes, contains almost twice the amount of magma scientists once believed it to possess, according to new research.

However, the new estimates about the molten rock within the ancient volcano’s reservoirs does not increase the likelihood that it will erupt any time soon, according to researchers who published their findings in Science early in December.

A volcanic caldera located in the heart of Yellowstone National Park in northwestern Wyoming, the supervolcano measures an impressive 43 by 28 miles. Volcanologists are aware of at least three major eruptions that have occurred at the site in the last 2.1 million years, as well as several smaller eruptions, the most recent of which occurred around 70,000 years ago. When the largest eruptions occurred, they produced tremendous amounts of ash that would have blocked out sunlight and later blanketed even distant regions with volcanic ash.

Volcanic eruptions receive magma from reservoirs located in two locations: one close to the Earth’s mantle and another nearer to the crust. Each contains a combination of melted rock and crystalline material, and in the past, researchers have found a connection between volcanic eruptions and the proportion of melted rock to solid crystal contained within this complex. When the proportion of melted rock is greater than that of the solid crystals they contain, it generally means that the likelihood of an eruption is greater, since this combination eases the movement of the volcano’s magma.

The recent study, led by Ross Maguire, a researcher at the University of Illinois Urbana-Champaign, relied on seismic data recorded over the last two decades at Yellowstone, which allowed them to produce estimates of the amount of melted rock in its volcanic reservoirs versus the solid crystal.

Lending aid to their supervolcano study had been the help of supercomputers, which were instrumental in producing 3D modeling of the seismic waves, providing a more comprehensive view of the inner workings of Yellowstone’s volcano than past studies had attained.

Based on their estimates, the Yellowstone supervolcano contains an average of about 16 to 20 percent melted rock, as much as ten percent more than previous estimates. Although their new estimates rely on some assumptions related to the distribution and shape of solid crystals the reservoirs possess, it nonetheless points to the presence of almost twice as much melted rock as previous estimates yielded.

Fortunately, Maguire and his team’s recent study indicates that even at twice the amount of magma previously estimated to exist within Yellowstone’s volcano, it remains well below what volcanologists recognize as the eruption threshold. This, paired with the geological information indicating its most recent past eruptions, shows that the Yellowstone supervolcano can remain active for long periods without an eruption ever occurring.

That isn’t to say it will remain inactive forever, though. Eventually, the Yellowstone supervolcano will finally erupt, likely causing a tremendous amount of destruction to the surrounding region. Last year, a separate group of researchers who published their work in Nature – Earth and Environmental Sciences looked at the periods between eruptions at a supervolcano in Sumatra in an effort to better understand how they relate to eruption timescales.

“Gaining an understanding of those lengthy dormant periods will determine what we look for in young active supervolcanoes to help us predict future eruptions,” said Martin Danišík of the John de Laeter Centre at Curtin University, one of the coauthors of last year’s study.

In the meantime, researchers continue to monitor Yellowstone for any potential changes in its volcanic activity, and while small “earthquake swarms” are frequently reported in the park, none of them point to the imminence of any catastrophic eruptions.

Maguire and his team’s paper, “Magma accumulation at depths of prior rhyolite storage beneath Yellowstone Caldera,” appeared in Science on December 1, 2022.